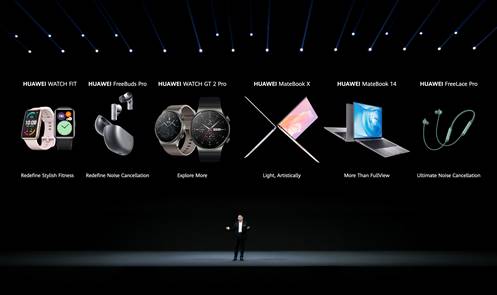 Huawei launched half a dozen new products at its global launch event held on Friday. The latest products the company launched include a pair of notebook devices, two smartwatches along with new audio accessories.

Specifically, it is the MateBook X and MateBook 14 that the company launched along with the Watch GT 2 pro and Watch FIT. Then there also is the FreeBuds Pro and FreeLace Pro audio accessories that the Chinese tech giant introduced during its global launch event.

Huawei also reiterated they remain committed to the All-scenario Seamless AI Life Strategy and the latest product launch bears testimony to that. Huawei said they would continue forging relationships with partners to pursue the 1 + 8 + N ecosystem, which strives at bringing about a change in people’s lives through the use of advanced smart connected devices.

Both new notebooks toe the thin-and-light design theme and are the latest entrant to the company’s flagship PC range. For instance, the MateBook X measures just 13.6 mm while tipping the scales at around 1 kg. The notebook is even smaller than an A4 sized paper, making it among the most portable notebook devices around. The MateBook X is also the first to support Wi-Fi 6.

Apart from its dimensions, another innovative feature of the MateBook X is that it is the first to come with a 3K Infinite FullView display featuring borderless design. The display supports gesture control as well, which adds to user convenience. For instance, taking a screenshot is as easy as swiping down on the display with three fingers. Huawei is calling it Fingers Gesture Screenshot. Besides, the display is multi-touch enabled too.

Another of the biggest positives with the MateBook X is that it supports Multi-screen Collaboration. This allows users to connect other devices with the notebook and collaborate with those seamlessly. For instance, users can easily connect and collaborate with a smartphone using the MateBook X, more so given that the Huawei Share tag now comes embedded right within the touchpad itself.

Once connected, users can control both the PC and the phone via a single screen. Those include sharing files between the documents or even editing files stored in the smartphone via the PC. A 10th gen Intel Core processor keeps things moving while a pair of tweeters and woofers make it quite an entertainment device as well.

The MateBook 14, on the other hand, is positioned as a workhorse notebook device built around the AMD Ryzen 4000 H Series CPU. The notebook also comes with the Huawei Shark Fin Fans, which ensures the processor works at its optimum most of the time. Among the other features of the MateBook 14 include its 2K Huawei FullView Display while the Multi-screen Collaboration feature makes the device more productive.

Huawei is claiming better health features with the new Watch GT 2 Pro thanks to the inclusion of TruSeen 4.0+ feature, which leads to a more accurate heart rate monitoring. The smartwatch also comes with new workout modes, which include Skiing, Cross Country Skiing, Snowboarding, and Golf Driving Range. This is on top of the over 100 workout modes that the GT range of smartwatches already supports.

The GT 2 Pro also comes with a sturdy build such as sapphire watch crystal, titanium case, and ceramic case back that is safe for your skin as well. The smartwatch also easily supports over 2-weeks of runtime on a single charge.

The Huawei Watch FIT, on the other hand, is the company’s first sports smartwatch to come with a rounded rectangular watch face. The smart wearable comes with a 1.64-inch AMOLED HD display and comes with a 10-day battery life. The smartwatch also supports fast charging with just 5 mins of charging enough to support an entire day of usage.

The Watch Fit is also the first to support Quick workout Animation, which allows users to get started with their exercises easily and quickly. Similarly, it offers 13 running classes along with 96 workout modes. There is an integrated GPS as well, while the Watch FIT also boasts of water resistance of up to 5ATM.

Huawei is claiming its FreeBuds Pro is the first true wireless stereo earphones in the world to come with support for intelligent dynamic noise cancellation. It comes with three profiles – General, Cosy, and Ultimate – wherein the earphone automatically detects the sort of ambient noise and will switch between the three modes to offer the best possible noise canceling feature.

Huawei is also claiming the best in class noise cancellation rating of 40dB for the FreeBuds Pro. Other features of the earphones include a dual connection with Android, iOS, and Windows devices. 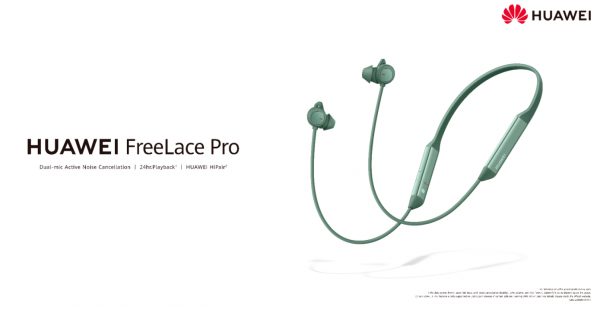 The FreeLace Pro, on the other hand, comes with a stylish design and robust build. The earphone comes with a pair of 14 mm aluminum-magnesium, alloy dynamic drivers with bass tubes, which, coupled with the intelligent noise cancellation feature it comes with, provides for a truly incredible listening experience.

The earphone also supports Huawei HiPair technology that allows for it to pair and get charged simultaneously without hampering the performance of either. A five-mins of charging time will be enough to supports five hours of music playback time.