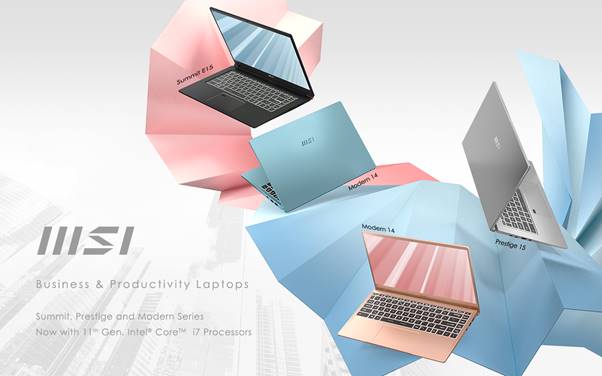 Taiwanese manufacturer MSI is the newest to enter the thin and light business laptop segment in India with its new Summit, Prestige, and Modern series of laptops. In fact, there are several first associated with the laptops given that those sport the new minimalist company logo. Besides, the laptops also feature the latest Intel 11th gen Tiger Lake series of chips that provide for a huge leap in performance and gaming capabilities.

As for the new MSI laptops, it is the Summit E15, Summit E14 and Summit B15, Summit B14 devices that the company is offering for business users in the country. Then there is the Prestige 15, Prestige 14, and Prestige 14 Evo or the Modern 15 and Modern 14 series of laptops as well that has been launched by the company.

The Summit E15 is the highest rated laptop here and features specs that are par for the course. Those include a 15.6-inch 4K display having 100 percent Adobe RGB complemented by thin bezels on all sides. The laptop comes powered by the new Intel Tiger Lake Core i7 processor coupled to NVIDIA GeForce GTX1650Ti GDDR6 4 GB with Max-Q design.

The laptop comes with up to 64 GB of RAM along with a NVMe M.2 PCIe Gen4 SSD and the M.2 NVMe PCIe Gen3 SSD slots. For security, you have TPM 2.0, Finger Print Reader features. Ports on offer include two Thunderbolt 4 slots, two Type-A USB 3.2, and one HDMI slot. Plus, there is a microSD card reader as well, as is a headphone-out combo jack. The laptop however, weighs at 1.79 kilos.

The E14 also comes powered by the 11th gen Intel Core i7 processor coupled to NVIDIA GeForce GTX1650Ti GDDR6 4GB with Max-Q design. The display comprises of a 14-inch 4k panel with 100 percent Adobe RGB. The laptop supports up to 32 GB of memory while having a single NVMe M.2 PCIe Gen4 SSD slot.

The laptop is powered by the same Intel 11th gen Tiger Lake Core i7 chip integrated with the Intel Iris Xe graphics. There are 2 DDR-3200 slots onboard with a max memory capacity of 64 GB. For storage, you have the same option as on the MSI Summit E15.

A 15.6-inch FHD panel makes up the display. A lot of other features continue to be the same as on the E15, which includes the keyboard and fingerprint scanner. Port layout is also almost the same except that there is only one Thunderbolt 4 port on the B15 while the E15 has two. The B15, meanwhile, gets one additional USB 3.1 Gen1 Type-A port.

The B14 bears a lot of similarity with the B15, which includes the processor and graphics, keyboard, security et all. The B14 however, has max memory capacity of 32 GB and has a single NVMe M.2 SSD by PCIe Gen4. There is no USB 3.2 Gen1 Type-A port, either. Also, it is a more compact 14-inch full HD IPS-level thin bezel display that the laptop comes with. It also is on the lighter side with a 1.3 kilo weight.

For ports, there are two Thunderbolt 4, two Type-A USB3.2 Gen2, one HDMI along with one Micro SD Card Reader. Plus, there is a Mic-in/Headphone-out Combo Jack as well. For security, there is a fingerprint reader as well.

The Prestige 14 has the same processor and graphics setting as on the Prestige 15. The keyboard and security features too remain unchanged. However, you have 14-inch 4K panel this time, with 100 percent Adobe RGB. Also, there is 16 GB LPDDR4x-4267 onboard dual channel or 32 GB LPDDR4x-4267 onboard, dual channel for 4K monitor. For storage, there is a single NVMe M.2 SSD by PCIe Gen4 slot. Ports too largely remain the same as on the Prestige 15 except that there is a Type-A USB2.0 port in place of the HDMI slot.

The laptop comes with up to 11th gen Intel Core i7 processor with Iris XE graphics. There is a 14-inch FHD display along with 16GB LPDDR4x-4267 onboard, dual channel for memory. The rest of the specs is the same as on Prestige 14.

For ports, you have one Thunderbolt 4, two Type-A USB3.2 Gen 2, one Type-A USB 3.2 Gen 1, one HDMI, one micro SD card reader along with a Headphone-out Combo Jack.

None of the laptop’s costs have been announced as yet though MSI stated those are going to be available starting next month.