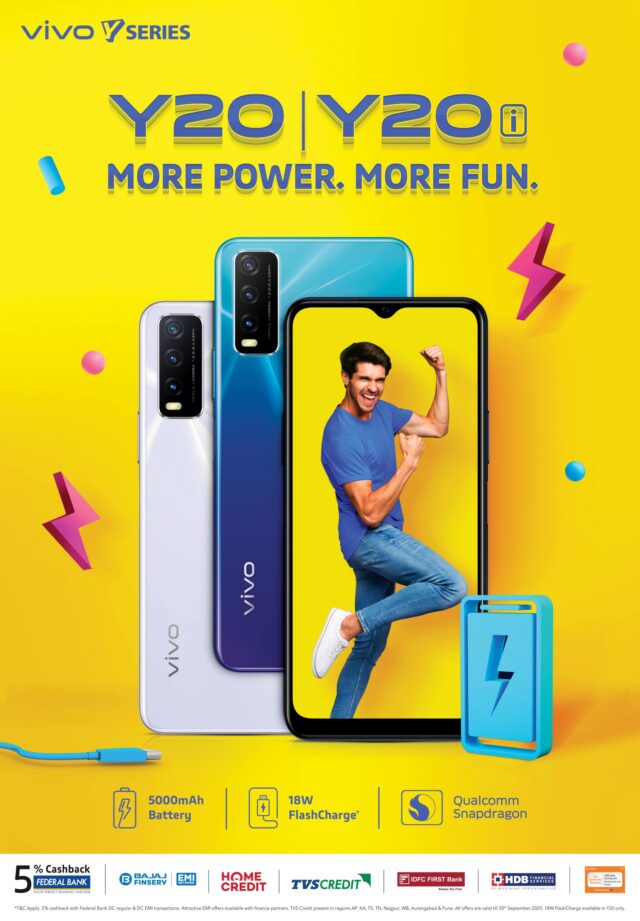 Vivo has launched its latest Y20 and Y20i smartphones in India. Both phones are basically the same and have almost the same specifications, save for a 3 GB RAM in the Y20i while the Y20 comes with 4 gigs of it. The Y20i starts at Rs. 11,490 while the Y20 starts at Rs. 12,990 for the same 64 GB of storage while having 3 GB and 4 GB of memory, respectively.

Otherwise, both the models come with a 6.51-inch HD+ IPS ‘Halo iView’ display having a resolution of 720 x 1600 pixels. The display again comes with a waterdrop notch for the front cam and has just the minimum bezels all round, save for the bottom chin, which is quite thick.

On the other side of the display lies the Snapdragon 460 chipset on both phones. However, as already mentioned, the Y20i comes with a 3 GB RAM while the Y20 packs in 4 GB memory. Storage on both models stands at 64 GB.

For optics, both the Y20 and Y20i come with a triple camera arrangement on the rear. That comprises of a 13 MP f/2.2 primary shooter complemented by two 2 MP sensors having the same f/2.4 aperture. The front notch hosts an 8 MP selfie shooter having f/1.8 aperture.

Power comes from a 5000 mAh battery that supports 18 W fast charging. The phone runs Fun Touch OS 10.5 based on Android 10. Connectivity options with the phones include Wi-Fi, Bluetooth 5.0, micro USB port, GPS, and OTG while there is integrated FM radio as well.

The phone is going to be available in two colour options of Obsidian Black and Dawn White and will go on sale in the country starting August 28. The phone can be purchased off almost all major online stores, including the Vivo India e-store, along with partner retail stores across India.