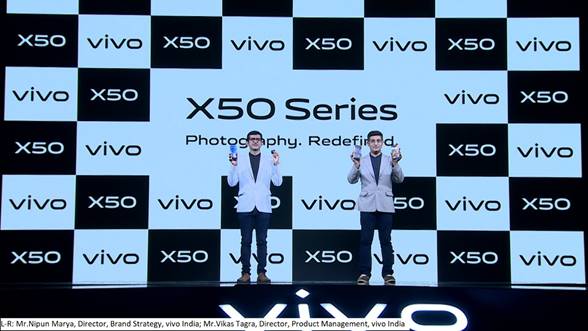 Vivo has launched its flagship X50 and X50 Pro smartphones in India as was expected. The company said this happens to be a top-end phone with some of the best camera features you’d expect in a smartphone, which includes an advanced gimbal system for better image stabilisation. Also, as is almost becoming customary, Vivo too has the TWS earbuds to offer in the form of the Vivo TWS Neo.

Both phones have a similar build and display. That includes a punch hole 6.5-inch AMOLED panel on the front having 1080p+ resolution. The display has a 90 Hz refresh rate and supports HDR 10+ content. Both the phones run the latest Funtouch OS based on Android 10. An under screen fingerprint scanner is also common on both versions.

Apart from the processor, both the versions have different sized batteries as well. For the X50 Pro, it is a 4315 mAh power source while the X50 comes with a slightly smaller 4200 mAh battery. Both the phones, however, are backed by 33 W fast charging.

Vivo will like us to consider the X50 series more for its camera capabilities than anything else. And the phones do come suitably equipped as well. For the X50 Pro, it is a quad camera setup at the rear comprising of a 48 MP primary camera having the custom Sony IMX598 sensor as well as a gimbal feature which Vivo is claiming is an industry first.

That apart, there is the 8 MP ultra wide angle lens, a periscope type 8 MP telephone lens that offers a max of 60x zoom and a 13 MP camera for depth mapping. For selfies or video conferencing, there is a 32 MP camera at the front.

The base X50, however, has a less elaborate system in that it comes with the custom 48 MP Sony IMX598 sensor with OIS, an 8 MP ultra wide angle lens, a 5 MP macro shooter and a 13 MP depth sensor. The front, however, gets the same 32 MP camera for selfies.

Pre-orders for both the X50 Pro and X50 are currently being accepted with shipping expected to begin Jul4 24 onwards. The phone is available via all major online retailers in India including Flipkart, Amazon and the likes.

The company is claiming exemplary sound output with the Neo TWS earbuds thanks to the 14.2mm dynamic drivers and Qualcomm aptX support that it comes with. Other salient features of the earbuds is its IPS54 rating for water and dust resistance along with 5.5 hours of battery life with AAC. The same drop down to 4.2 hours with aptX while the charging case can sustain things for 22 hours. Connectivity options include Bluetooth 5.2 and a Type-C port.

The TWS Neo has been priced Rs. 5,990. No word yet as to when it is hitting store shelves in the country.