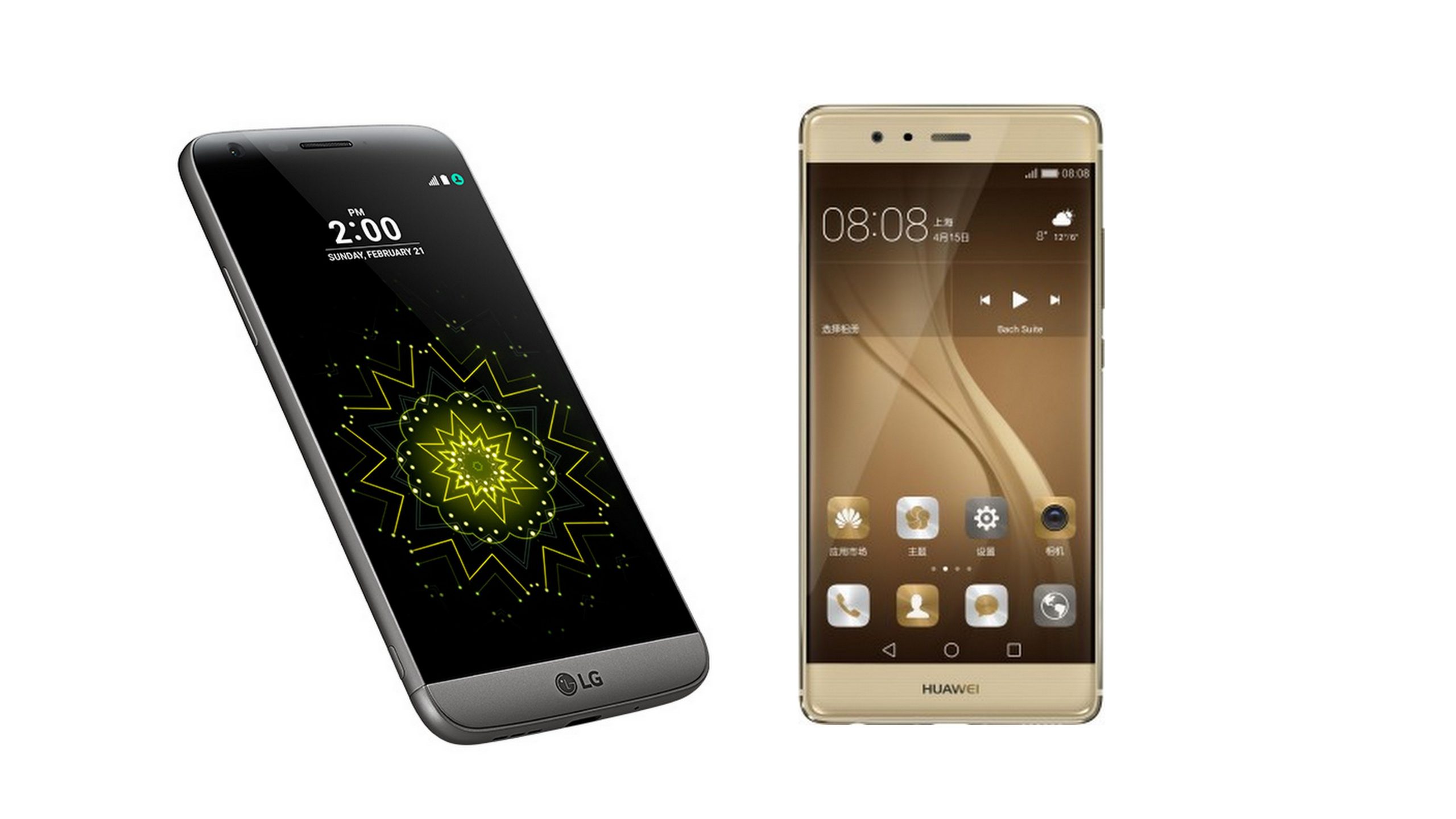 Huawei has just launched its newest flagship in India. With the Huawei P9, the Chinese manufacturer targets the premium smartphone market of the country. At a price tag of Rs. 39,999, it is the direct competitor of LG G5 which can be bought at around Rs. 41,000. The latter is one of the first modular smartphones to be available for retail sale. Today we will pit the Huawei P9 against LG’s present flagship.

Winner: Tie. Both the phones are genuinely gorgeous, so we leave this to your personal choice.

Winner: LG G5. This is a clear winner here due to its significantly sharper display and arguably better panel.

The Huawei-made HiSilicon Kirin 955 sits inside the P9. The octa-core 64-bit processor has four high-performance Cortex A-72 cores each clocked at 2.5 GHz and four low power Cortex A-53 cores each running at 1.8 GHz. This is combined with a quad-core Mali T880 GPU.

The mighty Snapdragon 820 powers the G5. The quad-core 64-bit processor has four custom made Kyro cores with two of them clocked at 2.15 GHz each and the rest running at 1.6 GHz each. The Adreno 530 ramps up the graphics performance.

Winner: LG G5. The Snapdragon 820 is more powerful than the Kirin 955 and is miles ahead in graphics performance.

There are two variants of the Huawei P9 with different RAM and internal memory, one with 3 GB RAM and 32 GB storage and the other with 4 GB RAM and 64 GB inbuilt memory. The smartphone can take in microSD cards of up to 256 GB capacity.

LG has only one variant of its G5 in terms of storage capacity. The handset comes with 4 GB RAM combined with 32 GB of internal memory. MicroSD card up to 256 GB is supported.

Winner: Tie. Both has similar storage configurations with an option for microSD cards. However, the LG G5 has an edge in India as Huawei only sells the 3 GB / 32 GB version here.

Huawei P9 runs the Emotion UI 4.1 on top of the Android 6.0 Marshmallow. On the other hand, the G5 has LG’s Optimus UX 5.0 UI layered on top of Android Marshmallow.

Winner: Tie. Both smartphones are pretty responsive and snappy.

Both the handsets sport the new dual camera configuration for their primary cameras. The Huawei has two 12 MP cameras at the back with one being a normal RGB one and the other a monochrome one. The monochrome one lacks the additional filter required for detecting other colors, resulting in increased light intake. This in turn significantly enhances the low light shooting capability of the P9.

LG, on the other hand, focusses on wide angle shooting. The G5 has a 16 MP and an 8 MP cameras at the back. The 16 MP is a conventional flagship grade camera while the 8 MP is dedicated to capturing enormous field of view.

Winner: Tie. Even though the G5 can shoot 4K videos which the P9 can’t, the latter has unmatchable low light shooting talent.

Both feature a similar set of connectivity options like dual band WiFi, Bluetooth v4.2, GPS with A-GPS, etc. The LG G5 also got an infra-red emitter for controlling your home appliances and a couple of additional sensors like color spectrum and barometer. Both sport the latest Type-C USB port.

Winner: LG G5. The G5 has the pretty useful utility of functioning as a remote control.

A 3000mAh battery juices up the P9 while a slightly lesser 2800mAh battery powers up the G5. Both batteries use the Lithium-ion technology. Huawei has priced their latest flagship at Rs. 39,999 in India and LG G5 is now selling for around Rs. 41,000 in the country.

Winner: Huawei P9. It has a larger battery and costs less.

The LG G5 is better than the Huawei P9 due to its better display and more powerful chipset. The Rs. 1,000 price difference is negligible for the benefits you get.