The LG G5 is the company’s attempt at re-imagining what a smartphone could be. It’s a smartphone that wants to stand out in the crowd, and one can’t deny the fact that the G5 is bizarre and special in its own way. LG’s latest flagship gizmo is modular, so you can easily swap parts with customisable add-ons to enhance the phone’s capabilities such as improved battery life, physical camera controls, and high-end audio. To top it up, LG is also allowing third party development of modules.

Sounds exciting enough? But is this all a fallacy or does it really give the LG G5 an edge over flagships from the likes of Samsung, Apple, and HTC? Has the LG G5 got enough going on that you’d buy one, in a day and age when you have the likes of HTC 10, Galaxy S7 Edge and the iPhone 6S which are all considered to be fantastic phones? Let’s find out: 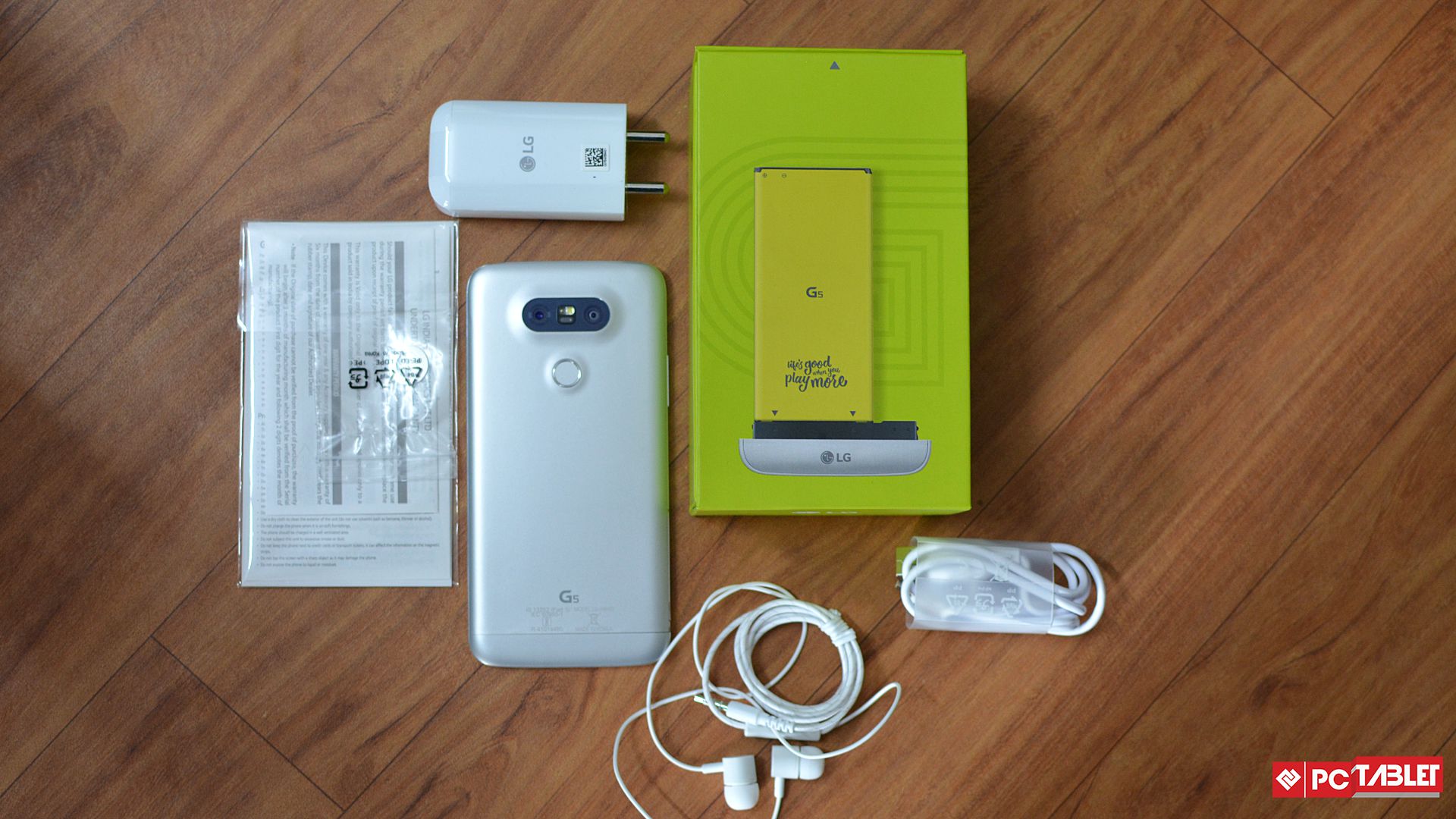 The LG G5 has premium written all over with its anodized aluminum finish. Move your fingers over the smartphone and you can feel its smooth contours and curved edges. It’s just the right blend of elegance and simplicity. While the matte back finish lends it’s that flagship appeal and keeps smudges at bay.

At 159 grams and 7.7mm in thickness, the smartphone feels easy in the hand or in your pocket. Though it still feels on the chunkier side of things when compared to the Galaxy S7 Edge or the iPhone 6S. That said, the LG G5’s modular approach is quite slick as it’s deceptively simple and easy to swap add-ons. Just press the button housed on the bottom left corner and the phone snaps open. Then just remove the battery and the replace it with a new module. Sadly we couldn’t try those added modules; we’ll update this review as we get them.

Overall, the LG G5 is a well built and ergonomically designed and certainly oozes that flagship feel. Though, it is prone to damages from accidental spills as there’s a tiny gap in the bottom slot through which water can seep into the phone.

[ps_prices] The 5.3-inch QHD display is as pristine as it gets. Brightness levels are more than enough to ensure readability under direct sunlight with crisp and clear texts. Colour accuracy is top-notch, and the 5.3-inch screen feels simply awesome whether you’re viewing pictures, playing games, surfing the web or watching videos. It’s bright and crisp but probably not as good as the AMOLED display of the Galaxy S7. That said, it still one of the best displays out there and it’s rather hard to find any major shortcomings with smartphone’s screen. 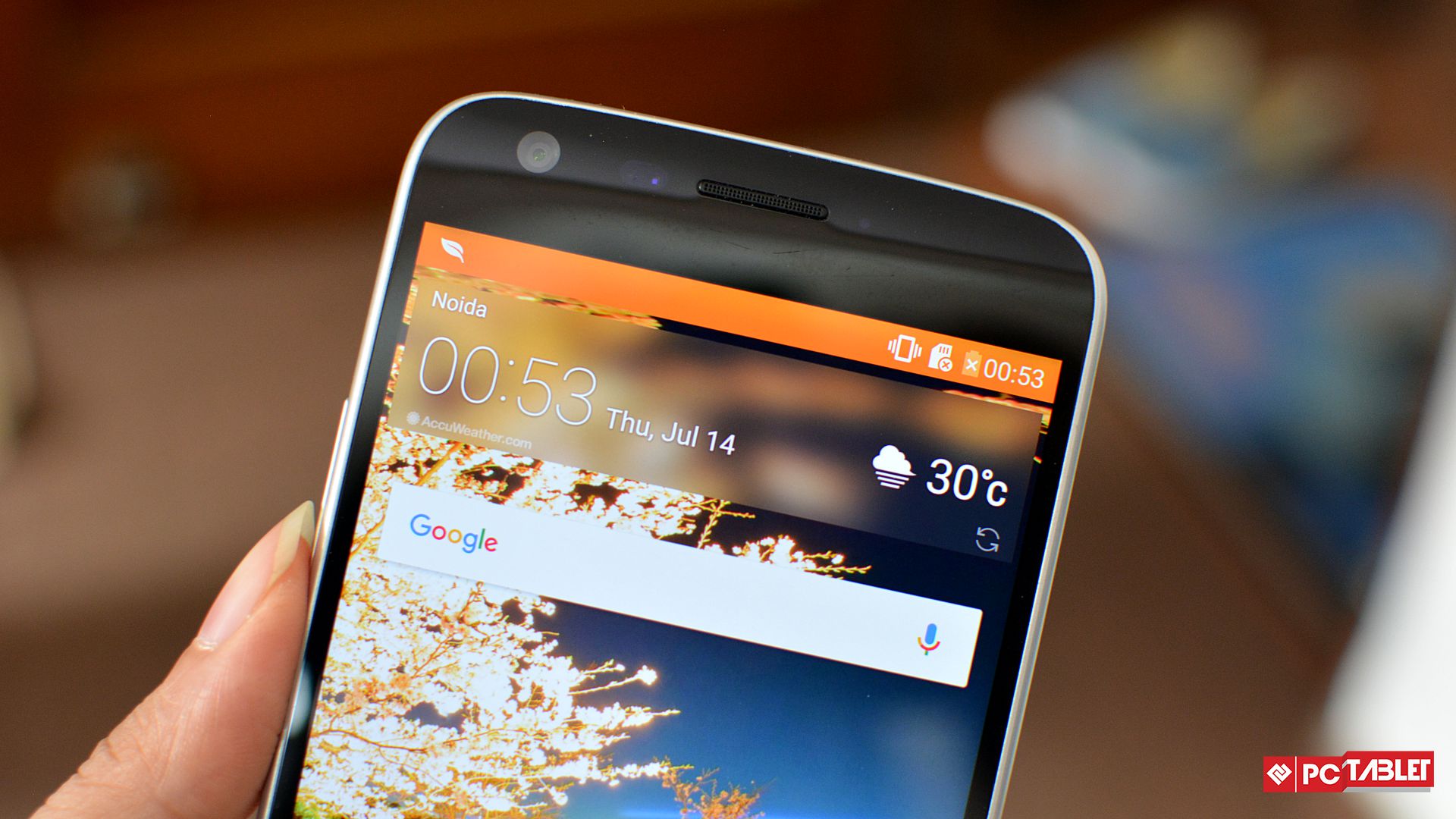 Just like the Samsung Galaxy S7, the LG G5 also gets an Always-On display, which the company claims consumes less than 0.8 percent battery per hour. Though it’s quite dim which makes it tough to read in bright light.

Under the hood, the LG G5 rocks a quad-core Snapdragon 820 processor bundled with 4GB of RAM which makes it insanely fast. Even the most frenzied of multitasking is like a walk in a park for the LG G5. While I came across no odd lag or stutter even while I was doing combos in Mortal Kombat. It just zips through anything you throw at it. It’s tailor made for gaming and multimedia consumption with its powerful hardware. Games run as they are supposed to and it doesn’t twitch even while playing 4K videos on YouTube. The phone’s inbuilt speaker also churns out fairly output, though the quality is way better with the bundled headsets that come with the smartphone.

The phone’s synthetic benchmark scores clearly pay homage to its stellar performance. As the LG G5 racked up an Antutu score of 119482 points. In Geekbench 3, it managed to pull-off a single-core score of 2343 and a multi-core score of 5130. Hands down, the LG G5 is one of the most powerful Android devices out there.

While battery performance is just about OK as the 2,800 mAh battery can eke out an entire day depending upon the usage. With normal usage, the phone can easily last an entire day. Though I did notice the battery level draining really fast while using ‘Navigation’.  In case you’re running low on battery, you do have the option to slam-in a fully charged battery to keep things up and running. New features inside Android Marshmallow like Doze also help with overall efficiency and this in turn means better overall battery performance. And with Qualcomm Quick Charge 3.0 technology, the battery charges really fast. You get about 50 percent charge in half n hour with the bundled charger. 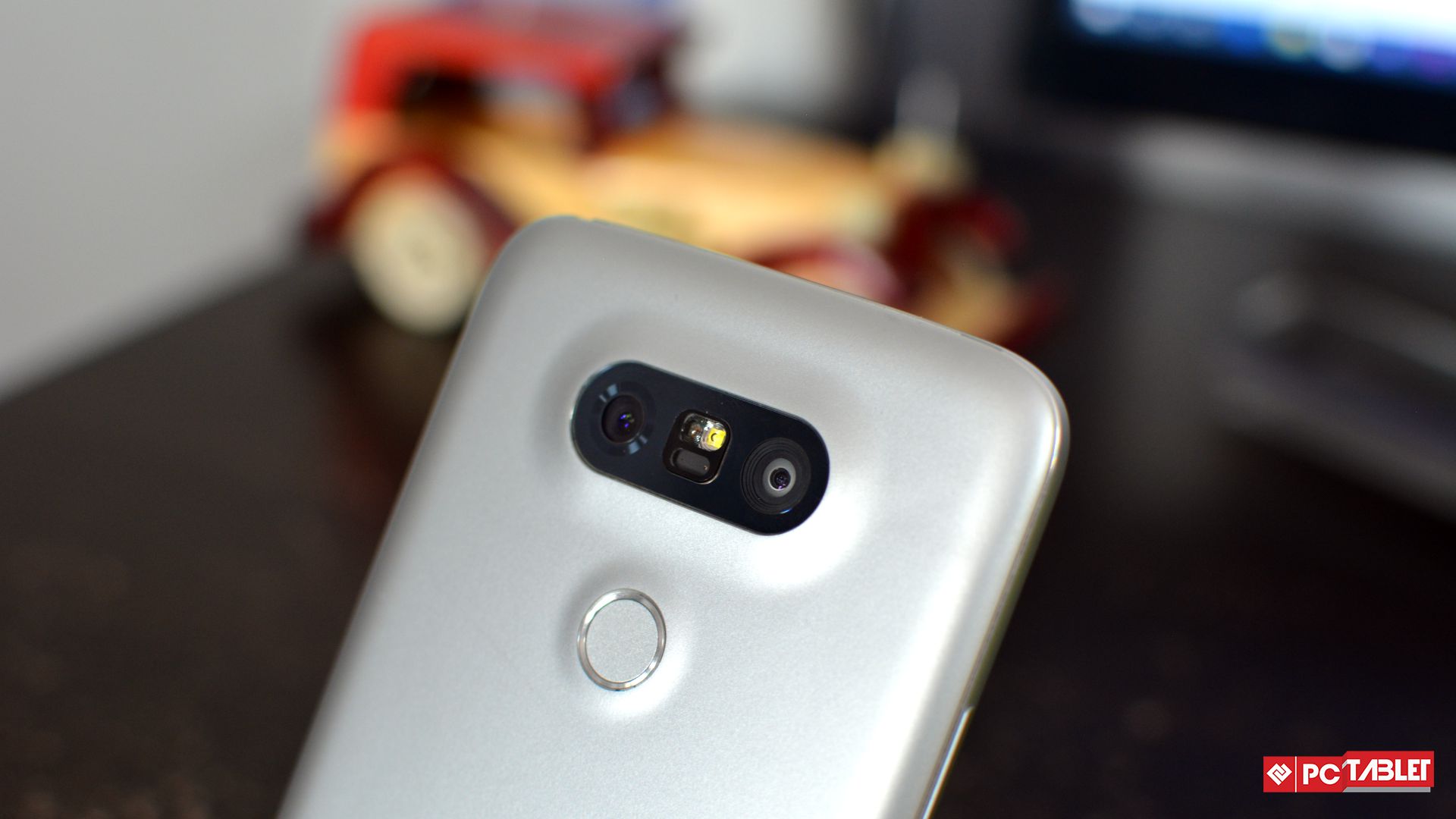 The LG G5 has a fingerprint scanner on the back that doubles as a power button. Apparently, the first time the Korean company has deployed a biometric sensor in a flagship  Its fast and responsive and I didn’t face any issues during my time with the device.

Think all smartphone cameras are the same? Not in this case as LG has mounted two cameras on the back with a dual-lens camera setup. One gets a 16MP lens that captures standard photos, and with the 8MP lens, you can take wide-angle shots. The secondary camera is what makes the LG G5 all the more interesting. As it has a whopping 135-degree field of view making it ideal for capturing sunsets, natural landscapes or large groups of people. The camera interface is also deceptively simple with a comfortable layout. You can toggle among the two cameras with a simple tap while sharing images on social networks. 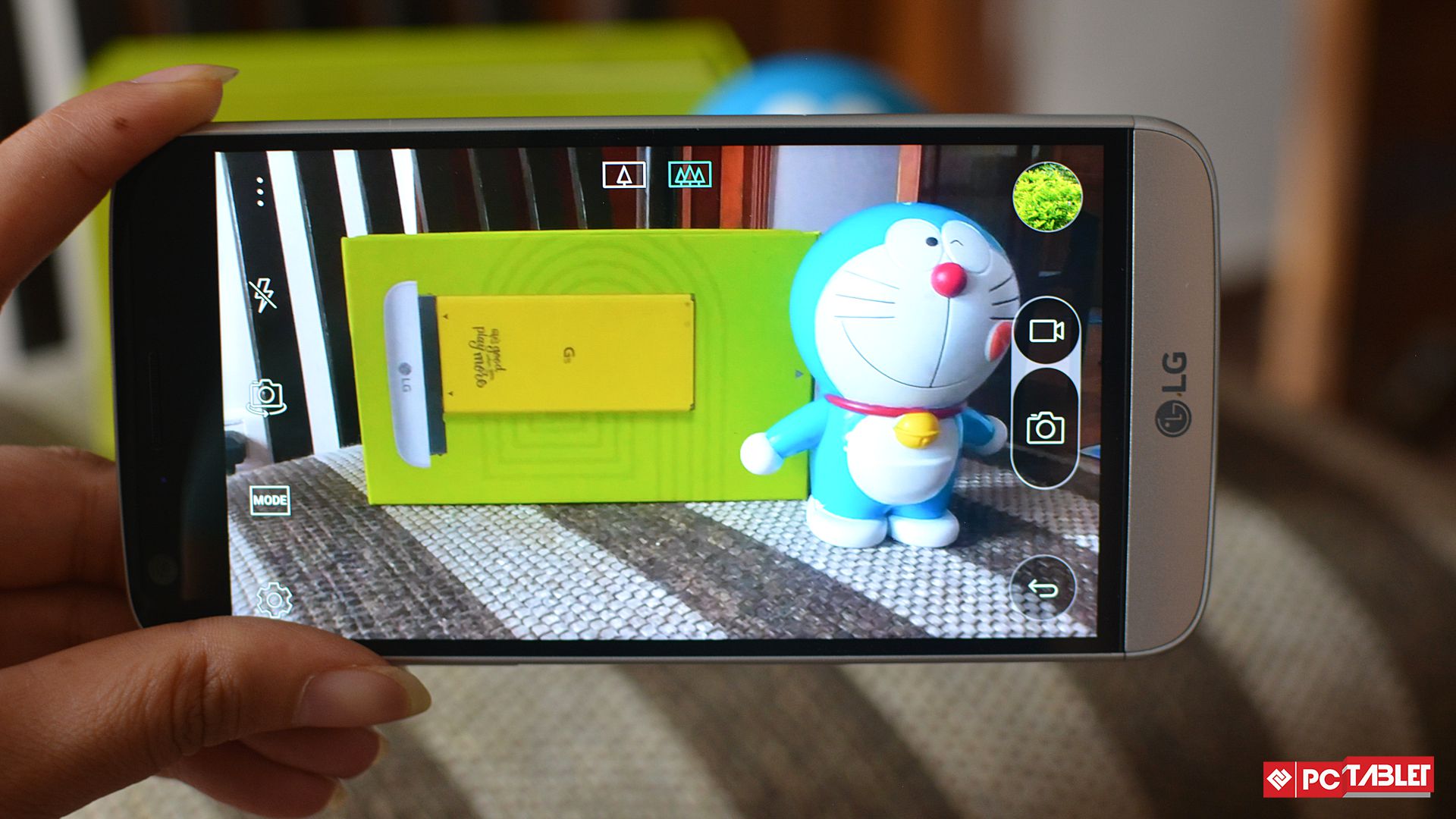 As for the image quality, pictures taken appear vivid, clean and full of detail. Macro shots show a good depth of field and look fantastic. And with OIS and laser auto-focus, the camera is super responsive as it focuses and shoots quickly. A great simple point and shoot camera that belts out really clean shots. Low-light capabilities of the phone’s camera also deserve an applause. Shots taken look crisp and noise-free with a good level of details and colour accuracy. While for the selfie smitten, there’s also a 8MP front-facing camera that churns out really good selfies.

Videos recorded in 4K also turned out to be impressive. The ability to switch among wide-angle and standard mode on the move comes in real handy, and the camera’ s simple and intuitive interface makes the whole experience rather delightful.

The smartphone runs Android 6.0 Marshmallow with the LG’s customized UI atop. And the first thing I noticed was the lack of an app drawer, which pretty much kills the whole Android experience. Thankfully, LG does give you the option to bring back the app drawer via the ‘Settings’ menu. 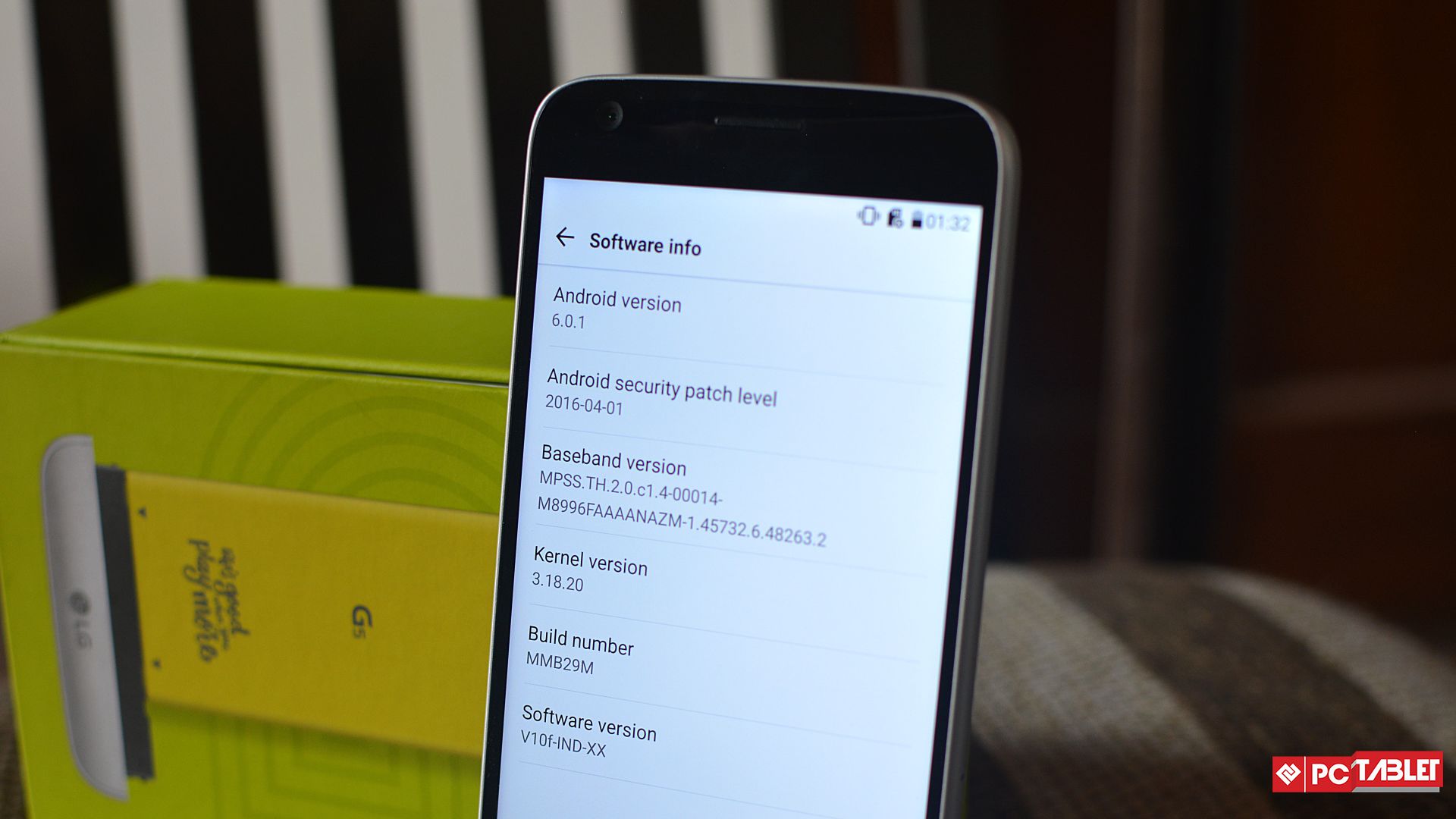 The LG G5 gives you multiple ways to navigate around the home screen and apps. You can organize apps on the home screen just as you would on iOS, or simply use the good and old app drawer to organize your apps. There’s also some amount of bloatware loaded onto the phone. Along with your usual Google apps, there’s LG’s own suite of apps along with Facebook, Instagram and Evernote and most of them come across as rather useful.

Overall, the UI appears relatively light and uncluttered, and the Android experience on the LG G5 is pretty smooth and fluid, though not as sleek as stock Android.

There are flagship smartphones, and then there’s the LG G5. It’s the company’s attempt at redefining what a smartphone can do and in my opinion, they are pretty close. But the big question remains, how well these modules work and whether third-party manufacturers will be enticed enough to roll with the concept.

[ps_prices] It certainly has the potential to be an exciting phone, but it’s still early days before we see what the LG G5 is capable of doing with its modular ethos. The biggest hassle with the G5 is the availability of the accessories that makes the device what it is. Not all of them are available to buy at launch in India. Add to it the fact that since phone’s official launch in April, there are still no other accessories unveiled for it besides the ones announced at launch. For me, that’s a big concern for a device that brags about itself as the world’s first modular phone.

Having said that, the LG G5 is still what you’d expect from a flagship phone. It’s one of the most powerful Android devices out there with its high-octane performance. The dual-lens camera setup is any photographer’s delight, and the handset exudes that premium look and feel. It’s a no-compromise smartphone across the board, but not convincing enough to make you switch from an iPhone or the Samsung’s flagship Galaxy range.