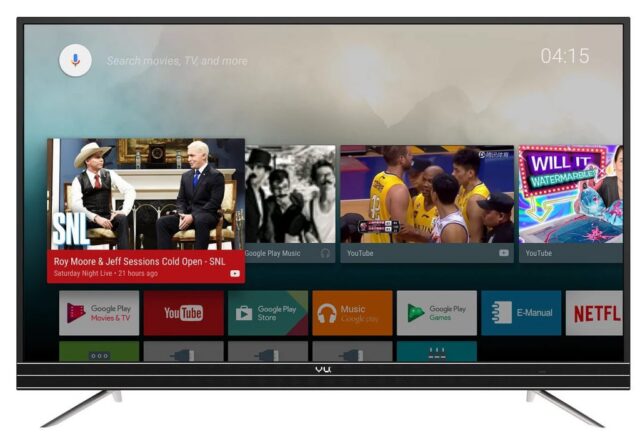 The smart TV market in India is suddenly buzzing with activity, what with the slew of new launches the segment has seen in the recent past. Topping that off is Vu with its latest series of 4K TVs that cater from the budget to the mid-range segment with four new TV offerings.

Specifically, the new smart TVs from Vu starts with the 43-inch model with the 50- and 55-inch models making up the middle tier while the 65-inch model forming the upper crust. Specifications include a 64 bit quad-core CPU that works in tandem with a Mali-470MP3 GPU. Then there is a 2 GB RAM along with 16 GB of native storage.

The new TVs run Android TV 9.0 and comes integrated with Chromecast and Screen Mirroring technology. That apart, the new Vu TVs also supports a host of streaming video provider such as Netflix, YouTube, Amazon Prime Video, and Hotstar, all of which have dedicated hotkeys on the remote.

The other salient features of the new smart TV, which Vu feel will make it stand apart from the competition, include Ultra-edge 4K display which allows for 40 percent enhanced brightness, thereby making it more comfortable to watch even during daylight. There is a parental block feature as well that keeps parents in command of what their kids are watching.

Each of the TV models also features a Box Speaker that supports Dolby Digital, DTS Virtual X Surround, Ultra Sonic Sound. Otherwise, it is a 24W speaker that accompanies the 43-inch model and a 30W speaker for the rest of the TVs. The TVs also boast of a special optical film that increasing the viewing angle, besides also controlling the amount of light that enters via the backlight LEDs.

That apart, there is a Pro Picture Calibration feature as well that enables viewers to adjust other display aspects such as gamma correction, noise reduction, colour temperature, HDMI dynamic range and so on.