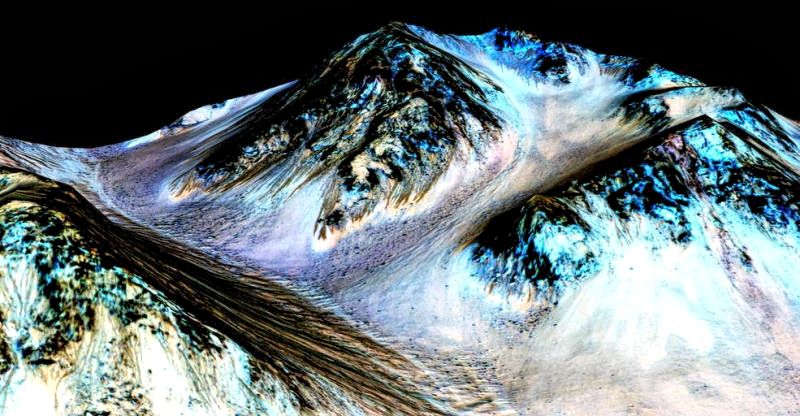 In a finding that enhances the odds of life on the red planet, NASA scientists say they have discovered some evidence that shows the presence of liquid water flowing erratically on present-day Mars. The team of researchers used an imaging spectrometer on MRO to identify signatures of hydrated minerals on slopes where mysterious and darkish streaks appeared to flow over time. The dark streaks have been puzzling many researchers since their discovery in 2010.

According to an astronaut, John Grunsfeld, an associate administrator of NASA’s Science Mission Directorate in Washington, they have been searching for life in the universe for the longest time possible.

And now, the significant development directly gives the possibility of there being life on Mars.

Water is an essential part of life. Besides, with NASA’s objective of sending humans to Mars in the 2030s liquid water could make things easier for the astronauts. Since they could use it for drinking and creating oxygen and rocket fuel. However, from the latest findings, there is a likelihood of complications to microscopic life forms.

Nevertheless, NASA’s Mars exploration program lead scientist, Michael Meyer, says that collection of rocks and soil for analysis on Earth could be the only definite way of determining whether there is life on Mars.

Chairperson of the House science, space and technology committee, Rep. Lamar Smith, R-Texas, says that the more the evidence, the more the encouragement for future Mars missions.

It has been very hard to resist the notion of water on Mars. The present Mars cannot compare to the ancient Mars. But how does water exist in liquid form on Mars yet it has an average temperature of minus 81 degrees Fahrenheit?

The water on mars contains certain salts that include magnesium perchlorate, magnesium chlorate and sodium perchlorate. These compounds avert water from freezing at exceedingly low temperatures.

Nevertheless, the arrival of NASA’s InSight Spacecraft on Mars in September 2016 will present Scientists with an excellent opportunity to learn more.