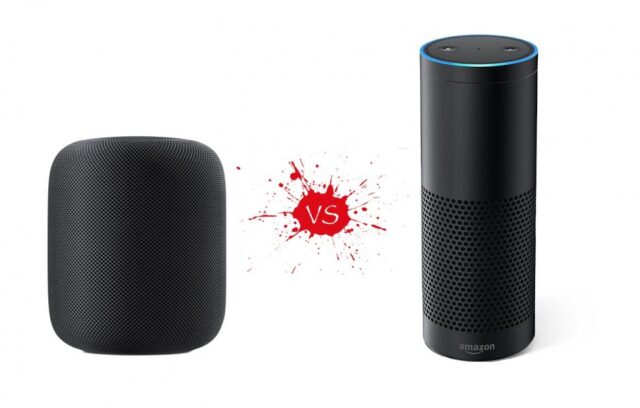 Almost non-existent till even a couple of years ago, smart speakers are fast becoming a must-have for a smart home. Apple’s recent launching of its HomePod is further indicative of the segment getting hotter than ever before. They aren’t there to just entertain you with some nice songs but can actually get a lot of your work done, things that otherwise would have required you to have a serious interaction with your smartphone or tablet device. Instead, you just have to reach out to the speaker with your voice commands, just as you would have done with a real assistant. And the speakers will get things done just as well.

That said, both the devices come with different design or functional philosophies. Here is how these two differ from one another with respect to design, or the supremacy of the respective voice assistants.

The Amazon Echo sports a no-frills design and sports a basic cylindrical shape sans any curves. That again does not make it any less appealing and is in fact, a nice thing to have on your desk. The basic shape again has remained the same since its launch in Nov, 2014 but still manages to hold on to its own among the new crop smart speakers that have emerged off late.

The Tap and the Dot are two other variants of the Echo with diminishing size, scope and price though the basic functionality still remains the same. It really looks cool when the ring atop the speaker illuminates with a soft bluish glow, something that happens each time Alexa is listening. Then there also is a mute button on top when you’d like it to be quiet.

In contrast, the Apple HomePod has a more chubby look and feel to it, what with its small roundish shape. It also has an uncanny similarity with the Mac Pro that Apple had launched back in Dec. 2013. It is almost as if someone took a Mac Pro chassis and turned into a speaker, with either a white or black mesh cover on the top.

Looks aside, the HomePod features a touch-responsive layer on the top, which again glows with a purplish-bluish color to denote its active state.

As just a speaker

First and foremost, both the HomePod and Echo are speakers of course, and have decent sound quality. While none can set a party afire, the HomePod still rises above the rest with its perceived brilliant sound quality. Another positive with the HomePod is that it possesses enough processing grunt to determine its spatial data and can adjust the acoustics accordingly. None of that with the Echo which will sound just about the same everywhere, irrespective of its surroundings.

Another inherent advantage with the HomePod and which Alexa lacks to some extent is the extensive Apple ecosystem that HomePod can fall back upon. From the point of view of a smart speaker, the HomePod can make good use of Apple Music. This makes your entire playlist along with every other personalized setting of your instantly applicable to the HomePod.

Sure the Echo too has partnerships with music apps such as Spotify along with of course Amazon Music but those surely can offer the personalized feel as say Apple.

Amazon over the years have built up partnerships with a host of smart device manufacturers so that the actual products now have built in compatibility with Alexa, the smart AI interface that serves as the functional backbone of the Echo. As such, you just need to call out Echo to perform simple tasks light dim the light, turn on/off the fan, and so on. In fact, Echo has more partnerships going with smart device manufacturers and service providers than the others in the segment.

Apple has just started out but seems to have hit the ground running. It had launched HomeKit previously which serves as the hub from where you can control all the connected and compatible device. Now with the HomePod in place, you need to speak out to the Apple speaker to have your work done. The only thing here is that Apple will need some time to polish its acts further, strike up more partnerships and enhance the scope of its speaker even further.

The more you speak to Alexa, the more capable she becomes. That again is true of any artificial intelligence based system and you need to engage with the Amazon Alexa for it to have a better understanding of all your likes and dislikes, your personal preferences, talking style and so on. Amazon is also pushing updates all the time and it’s a continuous learning process. And from what we have come to see and expect of the Echo, Alexa has learnt well and continues to be a quick learner as well.

For HomePod, it is the now familiar Siri that does the job. It again is the same that responds to your queries and everything else on iPhones, iPads and even in the Mac computers. She is designed to provide you with the right information you need and will search the net via Bing when it needs to fetch information from the World Wide Web. In fact, so smart Siri has become off late that she can even answer queries that would require deeper searches. For instance, you can simply enquire about the drummer in the song being played and she will have the answer for you.

However, with many more devices in the market proving to be an excellent competitor, for example Google Home, the test of time shall prove who between Amazon Alexa and Apple HomePod wins the battle. But then, from the manner things stand at the moment, it is the Amazon Alexa that seems to have the edge over the HomePod.