Home News Google Home vs Amazon Alexa: Which is the best Home Assistant 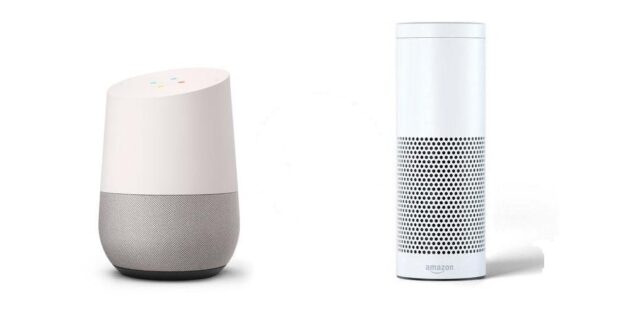 Amazon’s Alexa and Google Home are both prime examples of rapid advancements in Smart technology. Amazon started it all, baking its Alexa Voice assistant in the Echo, Dot, and Tap. Soon after, Google jumped onto the bandwagon with its Google Home smart speaker. Both have their own set of pros and cons. But which one is ideal for your smart home needs. We decided to put the two in the ring to find out key differences in terms of features, usability, and pricing. Let’s find out which one makes for a better buying option?

Both the Alexa and Google-assistant powered Home make for pretty decent digital assistants. While they’re still light years behind Tony Stark’s personal assistant, Jarvis. Both are equipped to answer your basic questions or questions about weather, or local and current events. Besides, they can even manage to-do lists, calendars, and shopping lists.

However, the Echo’s primary advantage is the numerous third party integrations and ever-expanding catalog of skills. Enabling them allows you to personalize Alexa to your needs, a definite high point for Amazon. However, it’s easy to forget the trigger words for functions you enable but barely even use. Now, that wouldn’t really be considered as an advantage, would it?

Much of streaming service support depends on the eco-system. Alexa is tailor-made for Amazon services such as Audible and Prime Music, and same happens to be the case with Google Home. It works better for Google services such as Play Music and YouTube. It also gets the ability to work as Chromecast speaker. Overall, both devices never usually fail to play what you ask for.Apart from the likes of Apple Music and Tidal, both are compatible with popular streaming services such as Spotify, Tune In, Pandora, and iHeart Radio.

While both speakers aren’t going to win the hearts of music aficionados. That said, they do pack some punch for their size. There isn’t much difference in terms of overall sound quality. But Alexa-compatible Echo and Tap speakers have a slight edge with their sound stage and bass levels. Besides, Amazon’s offering can also work as a standalone Bluetooth speaker. But all in all, you don’t find much of a difference in terms of audio quality.

The fact that you can ask the Google Home pretty much anything by simply throwing a voice command to get an answer is a huge advantage. On the hand, Alexa can get a tad irritating over the course of usage. Given that you have to enable skills then assign a word on Alexa also becomes tiresome. On Google Home, you don’t need to add any skill as it easily detects and understands voice commands. None of this “enabling skills” step that Alexa has – which, in my opinion, is rather non-intuitive, makes Google Home much more user-friendly. One can’t imagine trying to remember the exact word for each of Alexa’s 10,000 skills. With Google Home, you simply get answers to questions you throw at it. Also, using the Google Home to start videos on YouTube and Netflix on TV, and control playback and volume is pretty awesome.

Much of it comes down to what ecosystem you prefer. However, both are equipped to handle the basic stuff rather well. You can add reminders, check your calendar or the weather, set alarms and timers, and more. However, Alexa’s inability to understand voice commands and answer basic questions gets rather irksome over time. That said, it still does more in terms of home automation, and certain key third party tie-ups should make Alexa the digital assistant to beat in the near future.

Even Google is taking giant strides and catching up pretty quickly to Alexa. Google Home is now compatible with even more services. And the ability to use Google Cast is certainly one of Home’s single most killer feature. Both products are excellent, but for me, Google Home has a clear edge for its sheer usability. The fact that it costs $50 less also gives it a slight edge over Alexa. We aren’t saying that Alexa is bad. It’s just that the Google Assistant-powered Google Home seems to understand a heck of a lot more compared to Alexa.