The Google Play store is chock-full of outstanding games. Some are longer affairs like RPGs while others scratch any racing itch you could have. Shooting games have become quite popular on mobile devices, with first-person shooters and especially shoot-em-ups gaining traction.

Over the years, console releases have frequently felt sub-par due to aspect ratio problems making them seem like an unnatural fit for traditional television sets, but mobile devices entirely replicate TATE mode. With simpler control schemes, beat-em-ups have also been a popular mobile release, so let’s take a look at the best releases offered up on mobile devices so far.

According to Wikipedia, the term “arcade game” is also used to refer to an action video game that was designed to play similarly to an arcade game with frantic, addictive gameplay.

There are lots of Arcade and card games available online to play as well, where you can compete, bet, and win cash prizes as well. https://sport.netbet.co.uk/ is one such awesome website that gives you cash prizes for play games.

The Raiden games are some of the most revered vertical shooters ever made. They originated in the arcades, and the shoot-em-up genre was a natural for the quarter-munching arcade world. Raiden Legacy gets you Raiden, Raiden Fighters, Raiden Fighters 2, and Raiden Fighters Jet. With mobile devices natively supporting a vertical orientation, all of the games retain their original aspect ratios.

Going beyond the original releases, the Legacy versions also include an auto-fire mode to make the action easier for those who enjoy shooters, but just aren’t very good at playing them.

While the Streets of Rage and Final Fight franchises made great impressions on consoles in the early ’90s, they owe their existence to the Double Dragon series. The beat-em-up genre rose to great heights in late ’80s arcades thanks to Double Dragon, and this collection was the first time the entire arcade trilogy was delivered to consumers in an arcade-accurate manner.

While games bearing the Double Dragon name have appeared on many consoles, none accurately replicated the experience of the arcade. Double Dragon Trilogy includes the arcade games and a story version with new content and achievements.

The mobile-specific difficulty is great for people just wanting to play it casually while those with controllers or playing it on controller-supported devices might want to go with the original or maybe even the expert levels. You can also choose between the original soundtrack and a re-arranged one, and even play two-player co-op with a friend if you’ve got Bluetooth controllers.

While Raiden Legacy delivers a lot of content for fans of vertical shooters, those with a flair for horizontal shooters will prefer the R-Type games. Irem’s series has become legendary and was one of the few arcade ports that could be replicated fairly well by console hardware.

The PC Engine/TurboGrafx 16 versions did suffer from lower resolution and more slowdown but were reasonably accurate. The sequel was rebuilt into Super R-Type on the Super Nintendo and suffered from a lot of slowdowns and a frustrating difficulty curve.

Dying didn’t just send you back to a checkpoint, but back to the beginning of the level. Both R-Type and R-Type II are replicated correctly on Android, complete with an auto-fire mode. Controller support is included and is a breeze to set up, which makes the mobile versions of either game the most arcade-accurate way to play them for modern gamers. 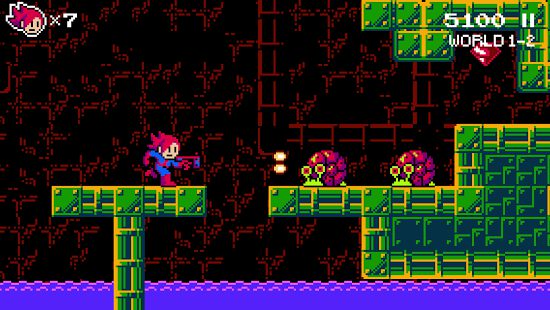 Mega Man’s formula was one that gamers grew tired of in its time but has become reinvigorated with Capcom’s decision to let the series lay dormant.

For years, fans have been making homages to the series with the NES itself getting Battle Kid, and Xbox 360 owners being treated to Rad Raygun and Vintage Hero. Mobile homages haven’t been all that common, though, until the release of Jump ‘n Shoot Attack.

This game combines the pixel-perfect jumping and shooting action of Mega Man with a perfect 8-bit pixel art style and combines it with a modern-day runner. It’s a fantastic game and something that could easily be expanded to a full platformer if the developers so desired. Download from Google Play Store.

In the early ’90s, beat-em-ups and fighting games were the kings of the arcade. Street Fighter II begat a slew of imitators while everyone and their mother came out with a beat-em-up game. Konami dominated the market with Teenage Mutant Ninja Turtles and another licensed fare, but only one has made the transition to mobile devices.

X-Men was either a four or six-player affair in arcades, and two player action is replicated here. Aside from some voice re-recording, the experience is just as fun now as it was in 1992 and anyone who grew up loving the X-Men will enjoy this game.