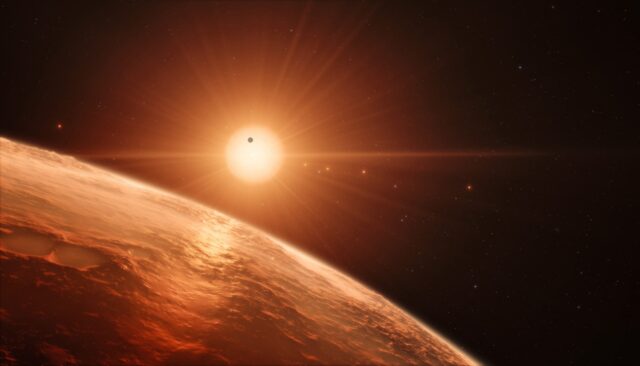 TRAPPIST-1, which is estimated to be only 8% the mass of Sun, is surprisingly twice as old as our planetary system. According to a new study, conducted by a team of international scientists from the University of California, San Diego, the approximate age of TRAPPIST-1 is 5.4 to 9.8 billion years, which means it is double the age of our solar system. Now the new arrow estimation of scientists has raised new questions on the orbit immovability of the seven planets circling this new star system as well as its potentiality to host life.

As astronomically claimed, the older stars are capable of producing lesser flares than, the younger stars, and this quality makes the older stars more favourable for the habitability. Moreover, NASA, the US-based space agency also has confirmed that the age of a planet or star system is one of the most pivotal factors for determining its probable livability. But the finding of such a longer timeline of TRAPPIST-1 also indicates the presence of water in the atmosphere has boiled off due to the high-energy radiation throughout the years.

Back in February this year, NASA declared about the finding of the seven Earth-sized planets, circling an ultracool dwarf star – TRAPPIST-1, located some 37 light-years away from the earth. Fortunately, three out of the seven planets are found to be stationed within the habitable zone of the planet. At the time of discovery, scientists by examining the size of low-mass star estimated the TRAPPIST-1 to be at least 500 million years old. But the latest finding has proved the earlier estimation wrong and produced a new timeline for the start system.

For finding this, the researchers examined and calculated the speed of the core star in its trajectory, located around the Milky Way. Moreover, scientists also took the chemical composition of the star’s atmosphere and the number of sparkles into account and concluded that Trappist-1 is up to 9.8 billion years old and could be double the age of our solar system.