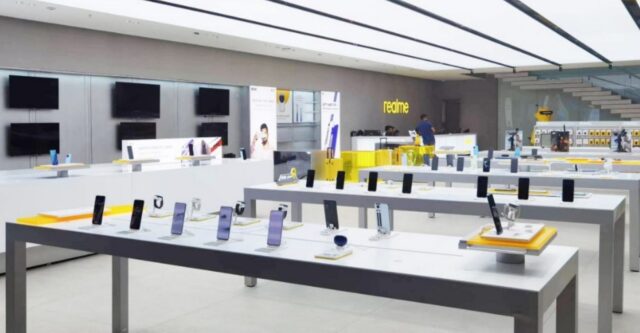 realme announced the launch of its first offline store in the world, and it is located in Ahmedabad in India. The store is spread over several floors and is designed to offer buyers a comprehensive guide to all that the company has to offer. There are separate sections devoted to smartphones, smart TVs, AIoT devices, accessories, and such, Plus, there are leisure areas as well where visitors can unwind a bit.

The store though will be thrown open to the public from June 1 onwards. At the moment, the store is being operated on a trial basis and things are being perfected to ensure everything functions to the optimum before it is opened up to the public. However, before that happens, the company shared a few images of the flagship store which provides us with a glimpse of how things are shaping up behind the scenes.

This however isn’t the first offline store the company opened in the country as it had earlier launched a store back in August 2020 itself. Rather, the company’s store in Ahmedabad is going to be the first global flagship store and is designed to offer a world-class shopping experience to buyers of its products. The company meanwhile has also announced there is going to be assured gifts worth Rs. 2000 for the taking for the first 100 visitors to the store from June 1 to June 3.

realme also said its first offline store in Europe is set to open tomorrow itself. The store is located in the Lurdy Haz shopping mall in Budapest, Hungary.