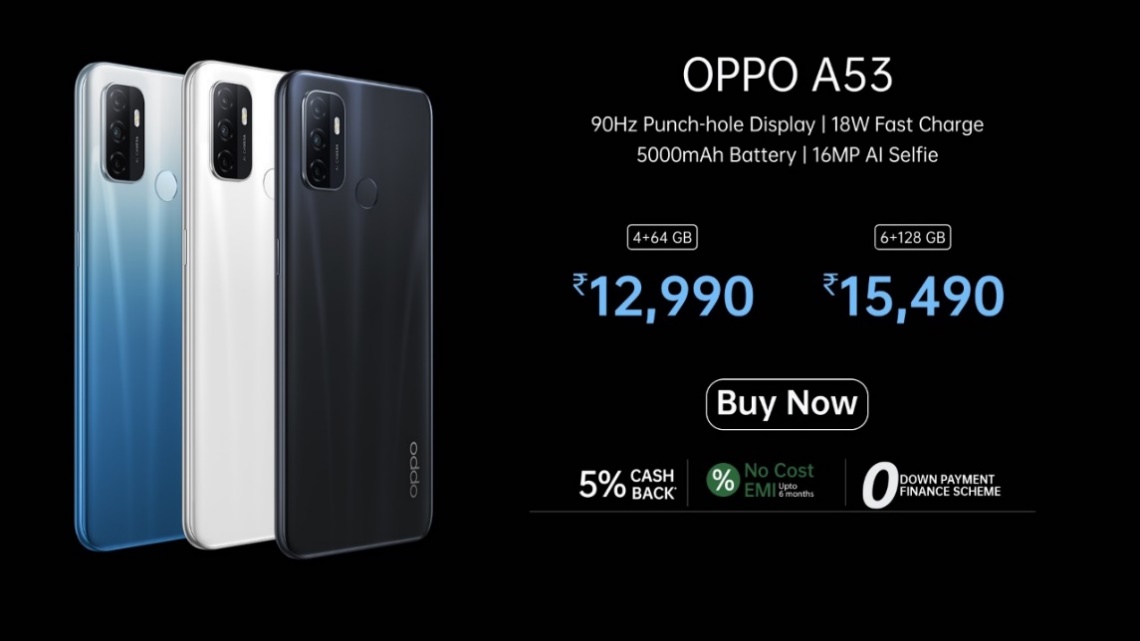 Coming to its specs, the front of the new A53 is dominated by a 6.5-inch HD+ LCD display lit up by 1600 x 720 pixels. As already mentioned, the highlight of the display here is its 90 Hz refresh rate while having a touch sampling rate of 120 Hz. The display comes with a punch hole to accommodate the 16 MP selfie cam along the top left corner.

Flip over to the rear and you will find a triple camera setup comprising of a 13 MP primary sensor along with two 2 MP sensors for depth mapping and macro shooting, respectively. The camera module again is quite similar to the recent crop of Samsung Galaxy phones where the sensors are hosted within a rectangular module placed along the top left corner. The fingerprint sensor is the only other feature at the rear.

Powering the phone is the Snapdragon 460 processor, which is coupled to either a 4 GB RAM and 64 GB storage or 6 GB RAM and 128 GB of storage. In either model, the storage can be further expanded to 256 GB via micro SD cards. Keeping the lights on is a 5000 mAh battery that is backed by an 18 W charger. The phone runs the ColorOS 7.2 which is based on the latest Android 10 OS version.

Colour options with the phone include Electric Black, Fairy White, and Fancy Blue. The phone goes on sale today, August 26, starting 3:00 PM from Flipkart. Buyers also have a 5 percent instant cask back offer as well, along with a few others to go with the phone’s launch.