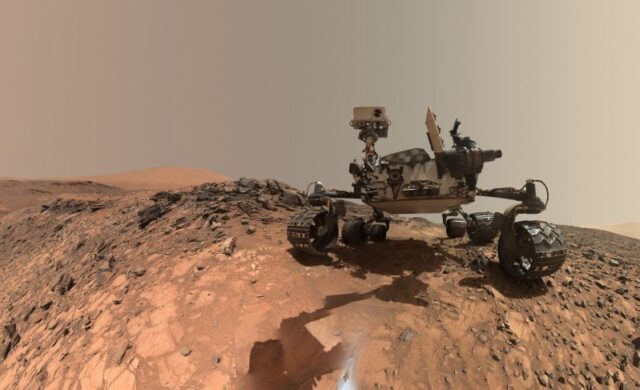 It apparently looks like Mars used to be more like our planet than earlier believed. Scientists in National Aeronautics and Space Administration (NASA) have analyzed data sent from Mars Curiosity rover, which has discovered high levels of manganese oxides in Martian rocks.

This new finding indicates that in our neighboring planet higher level of atmospheric oxygen did exist once. NASA Curiosity Rover used its laser-firing instrument in the Gale Crater to find chemical compounds in Martian rocks. It has taken Curiosity four years to confirm the presence of Oxygen and water bodies in the deserted planet.

This latest discovery makes scientist question the fact that in the Red Planet life may have existed once. Even though researchers have no clear idea about past life on Mars but the presence of water, and protective magnetic field makes it quite similar to that of earth. In the last four years, Mars Curiosity Rover has collected more than 1,500 samples of rocks and soil so that scientist can examine if life is again possible on the red planet.

Commenting on this latest development, Nina Lanza, a planetary scientist at Los Alamos National Laboratory said, “The presence of manganese oxides on Mars makes us wonder how was it possible to be formed on this deserted planet. But at the same time, this data will help us to come up with ideas to understand how planetary atmospheres might have become oxygenated.”

The presence of high concentrations of manganese in the Earth’s geological records is necessary to realize the shift in our earth composition as it explains the abundance of the atmosphere on our planet. The same type of materials is present on Mars. However after the disappearance of magnetic field on the Red Planet the water was split into hydrogen and oxygen because of radiation. A lot of the heavier oxygen which could not get sucked into space went into Martian rocks giving it a red look.

But the presence of manganese oxide, which requires lot more oxygen to form, make scientists believe that in the early times both water bodies and oxygen existed on the copper-hued desert of Mars.