Often pictures tell more than what is observable to a common man. Scientists have been revisiting older photos taken by telescopes and often find new and exciting things, hitherto unknown. NASA’s Hubble telescope spotted a shadow sweeping across a vast accumulation of gas and dust surrounding a young star, and it could point to a new planet which is located some 192 light years away. 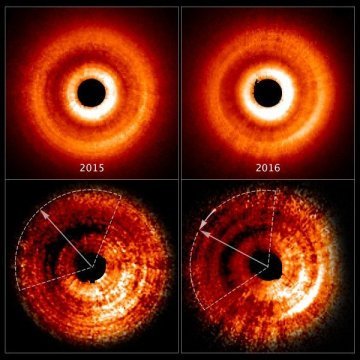 The shadow which was seen by the Hubble Telescope in the stellar system TW Hydrae is 192 light years far in the Hydra constellation. A shade smaller than our sun, the star is some 8 million years old, and the shadow was uncovered after analyzing the data taken by the Hubble telescope in the past 18 years. The astronomers had the benefit of viewing the same disk over a period of 18 years which made the shadow discernable. It also gave the scientists the hope that the shadow phenomenon could be observed in more young stellar systems.

Poring through the pictures Debes first came to suspect the event when he observed a change in brightness with a change in position. The aberration in the brightness was also noted using Hubble’s Space Telescope Imaging Spectrograph. Searching archives, the researchers pulled out six pictures taken from different epochs. The structures appeared to move in a counter-clockwise direction like an arm of a watch and finally in 2016; it was in the same position as it was in the images taken 16 years ago.

The researchers first assumed the structure to be a part of the disk. However, the structure was way too fast to be physically on the disk. Disks rotate at speeds governed by the laws of gravity and the outer regions of the disk take centuries to complete one rotation. The best explanation will be it is a shadow imprinted on the external disk rather than something happening on the disk itself.