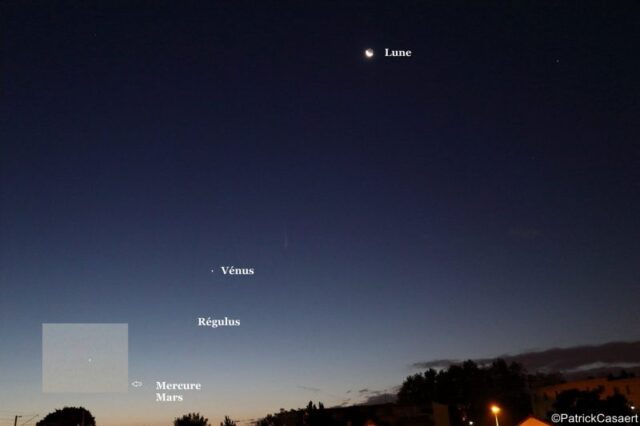 Whatever may be the situation in space, the moon manages to top the headlines of space research in most of the cases. And once again Moon is there to excite you. Yes, the Moon is now going to throw a historic block party in the sky on September 18.

Earlier this morning, the Moon, our nearest neighbor, covered up or occulted Venus and also the bright star Regulus in the sky and is expected to engulf Mars and Mercury later in the evening.

EarthSky.org said that the moon had not occulted three planets at a time in a single span of 24-hours since March 2008, and is not going to do once again until July 2036. EarthSky also added that there is nothing exciting for the sky-watchers during this epic event as this type of planetary occultations has got more academic importance than an observational interest. It’s because most part of the world is not in a comfortable location to watch even one of the four occultations by the Moon.

But it is expected that all the four covering up events will mostly pass through Europe and North America and also the Southeast Asia and Pacific regions have a more fair chance to have the occultations on their skies. McClure said that although the regions do have a chance of witnessing the event, the occultation of Mars, Mercury and Regulus will be extremely hard to view as they will occur during the daytime. And definitely, you need a telescope to view the lunar occultation if any of them manages to take place in the sky.

The moon is going to block Mars at around 4 p.m. EDT (2000 GMT), and this occultation will be visible in some parts of South America, Central America, Mexico as well as the Pacific Ocean. The occultation of Mercury is scheduled to take place at about 7 p.m. EDT (2300 GMT), and it is said to be visible from the mid-pacific region towards Southeast Asia and also in some parts of China.