iQOO has finally joined the already competitive smartphone market in India. The brand has been spun out of Vivo which is still a sub-brand in the Chinese market but will be a separate entity in our country. iQOO in China has been a brand coming up with premium smartphone focused more towards gamers at cut throat prices.

Their first product in India is iQOO 3 which is launched in both a 4G and 5G variant with different storage and RAM options. Sticking with their Chinese model, the new iQOO 3 brings top of the line hardware in a neatly packed package with an entry-level price of INR 36,990. We have been using the new smartphone for close to 2 weeks now and here’s what we think about the product.

Before starting with the iQOO 3 review, let’s have a glance at the phone’s specifications, pricing and things we get with the device. 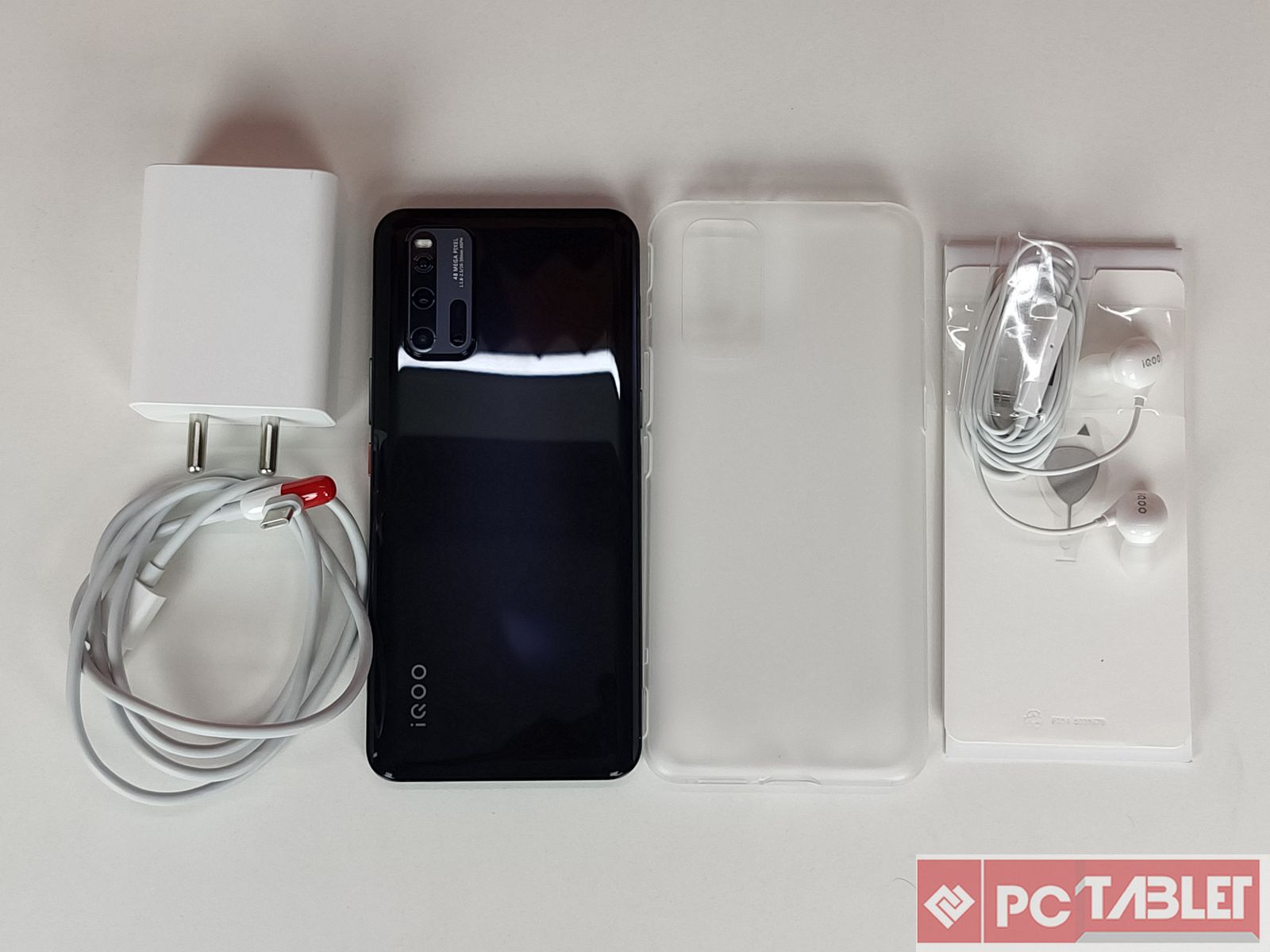 While looks can be subjective, the new iQOO 3 sports the tried and tested glass sandwich design. The phone is available in three color choices, include Quantum Silver, Tornado Black, and Volcano Orange. You get Gorilla Glass 6 on the back and Scotch Glass on the front while the metal frame adds rigidity to the smartphone. 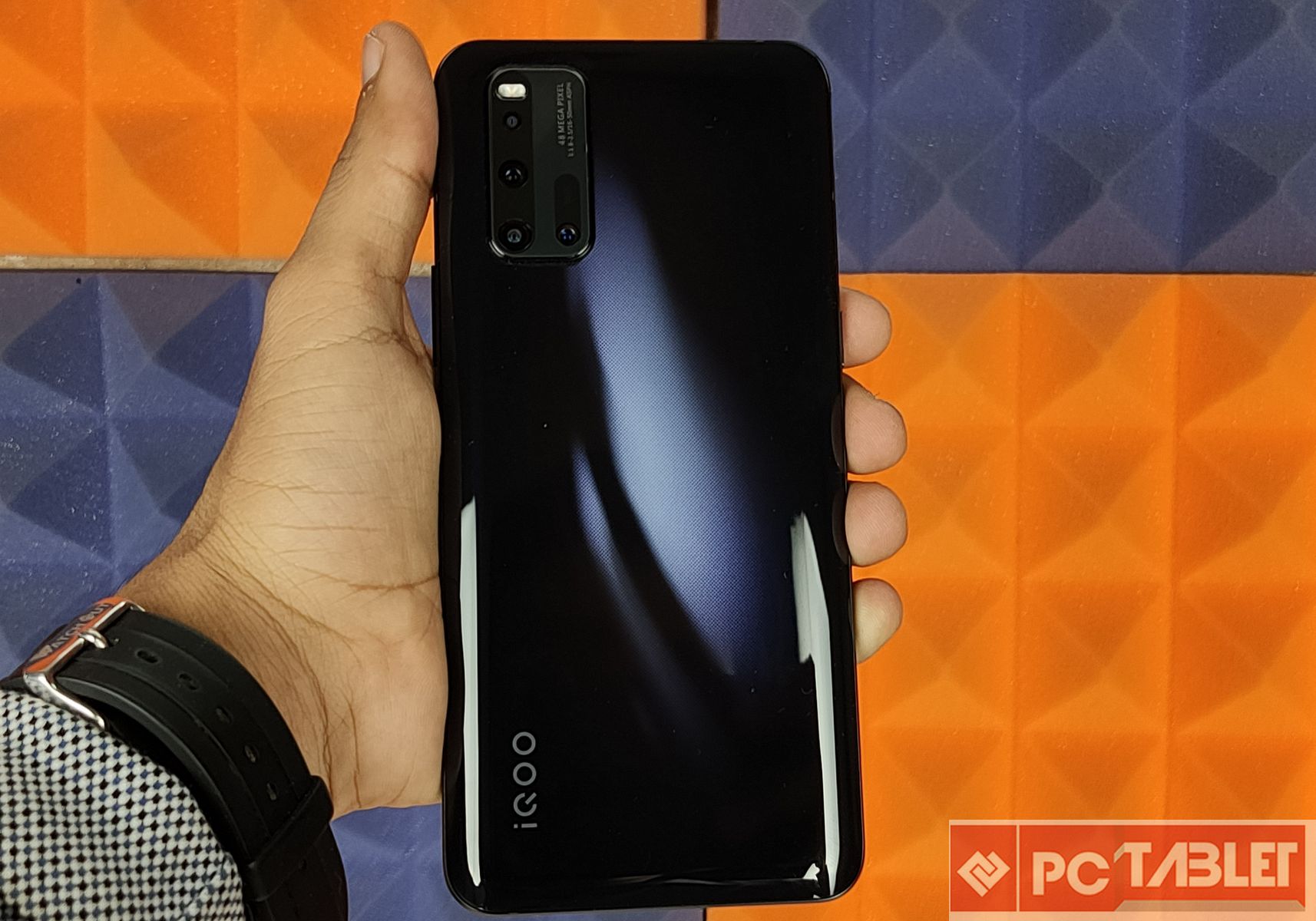 You get a vertically placed setup with three sensors back-to-back and the flash and depth sensor in a separate row. The camera module does protrude slightly and using a case would a sane option here. The rest of the back is kind of neat with just the iQOO logo on the bottom.

Coming to the button placement, the power button and volume rockers are placed on the right while the Virtual Assistant button is on the left and yes it makes an appearance here. Sticking with their gamer-focused stance, iQOO has added two air triggers on the right side of the phone as well and calls them ‘Monster Buttons’. They are plain and simple air triggers something we have seen on other gaming phones. The USB Type C port along with the 3.5mm audio jack is placed on the bottom. 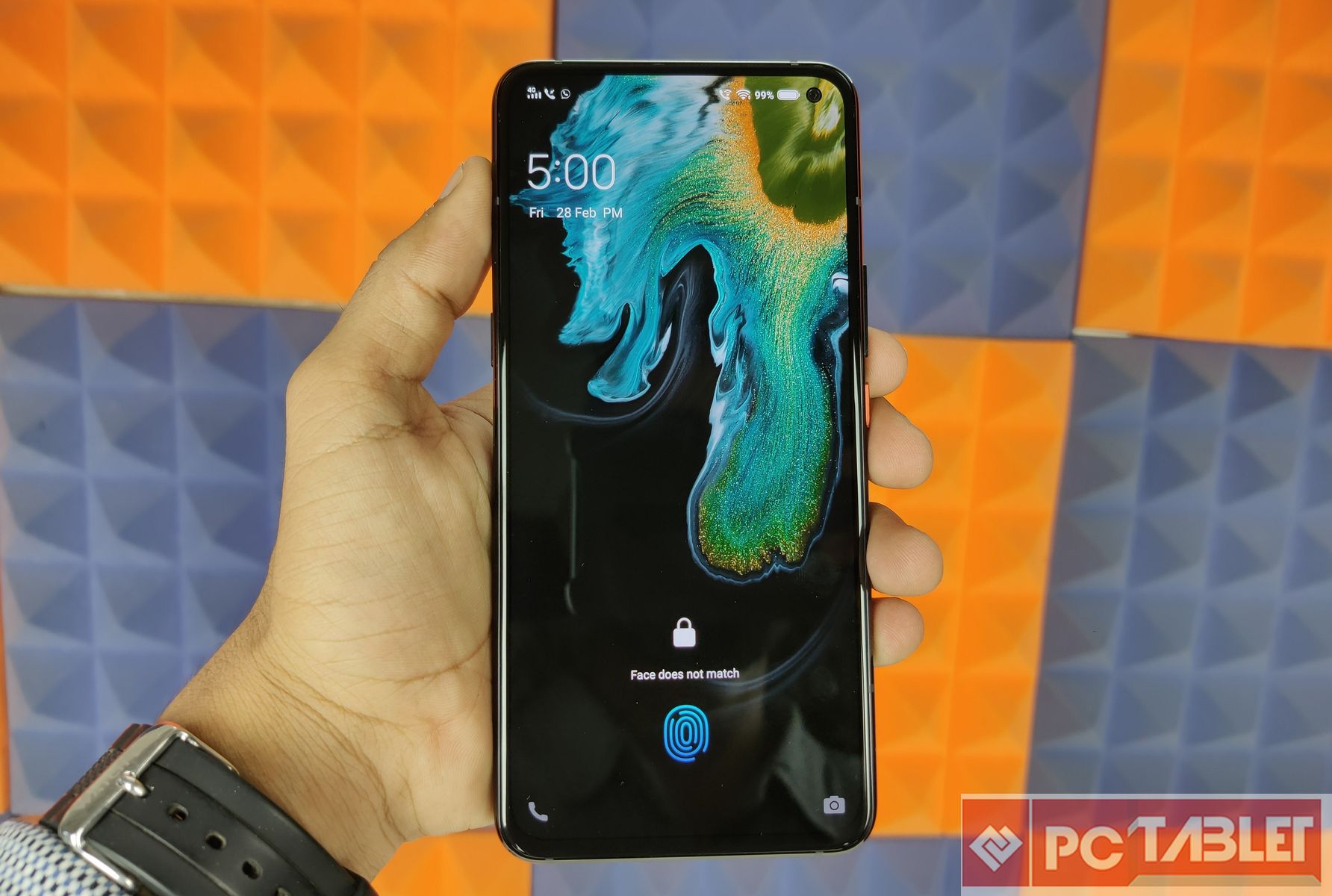 On flipping the phone, you see the bright 6.44-inch E3 super AMOLED FHD+ display with minimal bezels and a punch-hole cut out on the right top corner for the selfie camera. Punch-hole displays will be a hit this year with multiple brands working on using it in their products.

Overall the design we found the design to be functional enough with decent quality materials used. When compared to other smartphones in this category like the OnePlus 7T and the newly launched Realme X50 Pro, the iQOO does feel a bit short but makes up in other areas.

As mentioned above, the iQOO 3 comes with a 6.44-inch Full HD+ E3 super AMOLED display. Not only are the bezels extremely slim, but the hole-punch is also the smallest we’ve seen on a smartphone this year. 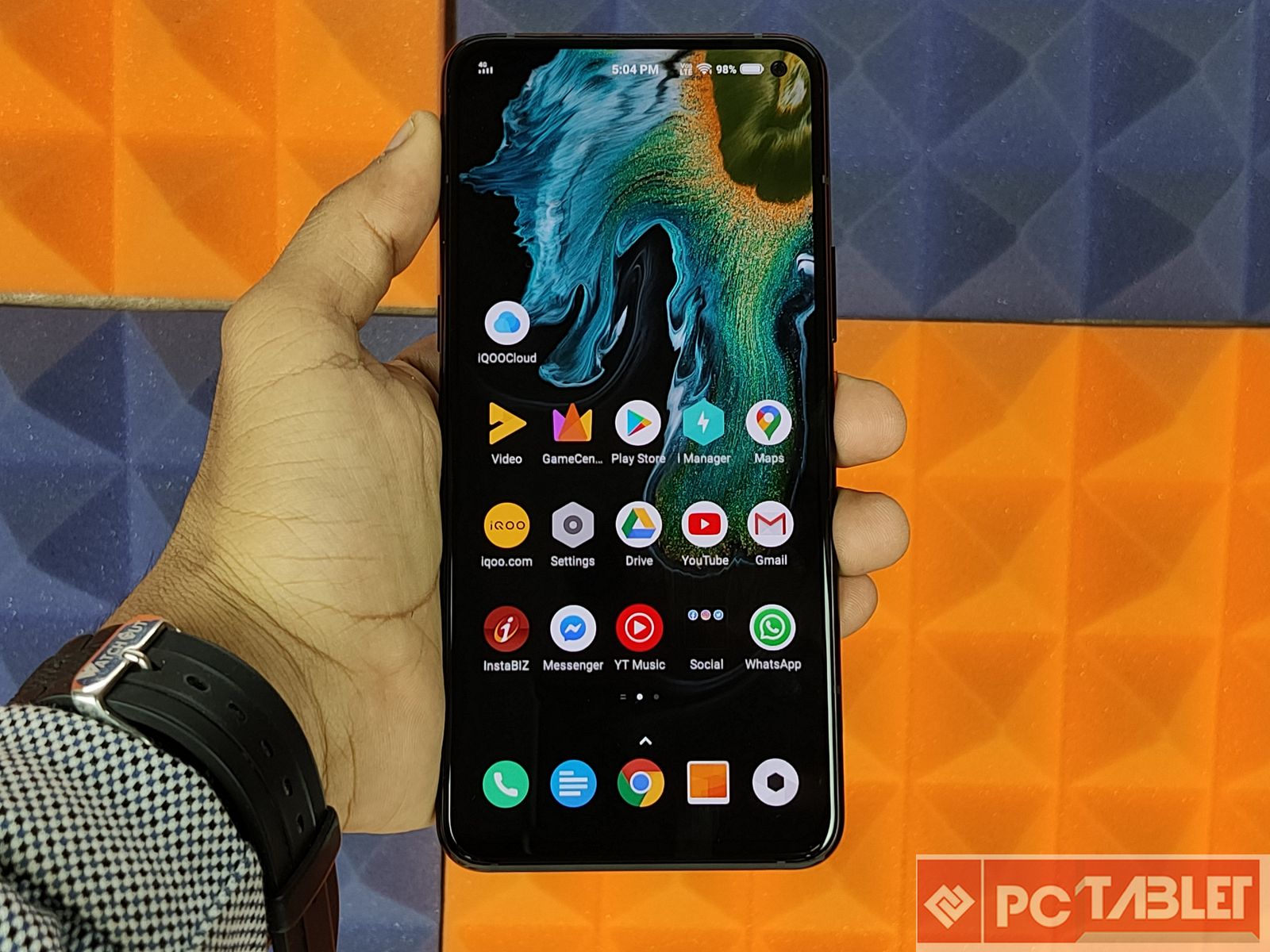 The panel gets very bright and has just the perfect amount of saturation. Owing to its AMOLED construction, we also get perfectly inky blacks. The minimum brightness also gets the job done for most scenarios—nothing to complain here. The panel has a standard brightness of 800 nits with a peak brightness of 1200 nits for playing out HDR content.

However, the only gripe in an otherwise decent display is the fact that the refresh rate is only 60Hz. Nothing wrong with that, but for a phone whose entire premise is based on being extremely powerful and ready for the future, this seems like a missed opportunity.

As you would expect, the performance is top-notch with no lags and stutters no matter which app you open. The faster storage kicks in with better rendering and loading times from scenarios like gaming to just opening videos that you recorded just minutes back. 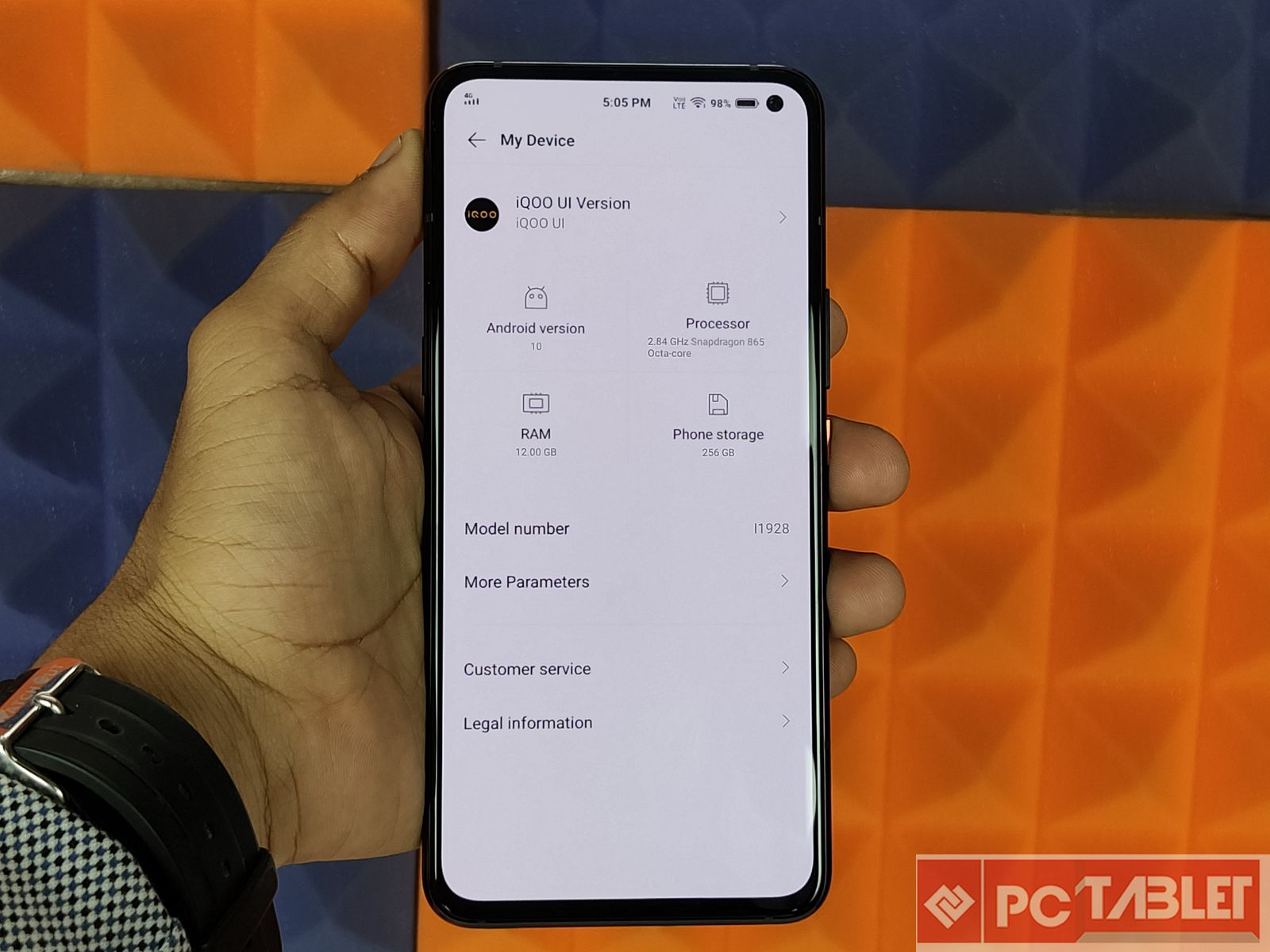 Since the phone is catered a little more towards the gamers, we had to try out all the Knicks and features. The new CPU and GPU combo help with buttery smooth gameplays. We tried PUBG and Call of Duty mobile which were playable at the highest possible settings with no lag whatsoever. The air triggers that iQOO calls ‘Monster buttons’ came in handy during FPS games but we did notice some input delays and misses and hope they get fixed with a software update.

The phone also has a Gaming Mode, which activates a number of other features like an instant surge of memory, blocking notifications, 180Hz touch response and 4D haptic motor. The 4D vibration motor brings strong haptic feedback while gaming.

Since the brand is spun-out of Vivo, our initial thought was that iQOO 3 will come with Vivo’s FunTouch OS but that wasn’t the case. Thankfully, the iQOO 3 runs on iQOO UI. In terms of implementation, it is still similar to Vivo’s and you could find some elements of FunTouch OS here as well. To begin with, there’s an option for an app drawer layout.  Unlike FunTouch OS, the quick settings are located on top instead of an interface that slides up like the older versions of iOS. 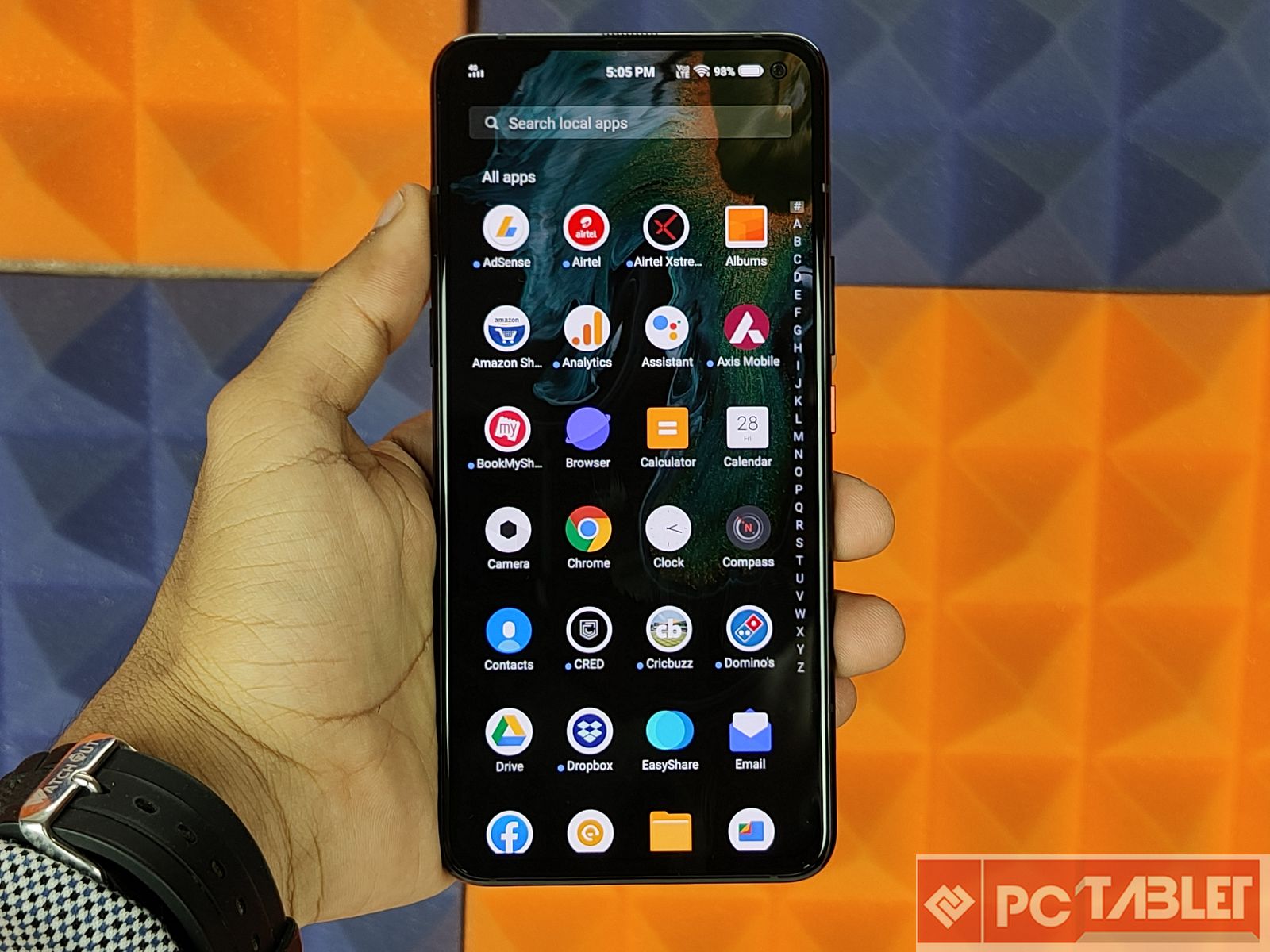 Now iQOO UI is a very customized skin, providing gestures, and shortcuts. Hence, if you’re someone like me who loves stock Android, then you’re definitely going to have a hard time getting used to the iQOO UI. Memory management is well implemented, with apps staying where they were left for hours after opening them.

There is a fair share of bloatware pre-installed along with some duplicate apps. The browser and the app store occasionally send notifications on updates that it deems relevant. There are some occasional hiccups when scrolling through the menus, that we feel will be addressed in the upcoming updates.

When it comes to optics, the phone gets a quad-camera setup on the back with variable cameras. It consists of a 48MP primary shooter, with two 13MP sensors for Telephoto and wide-angle use and a depth sensor. The main sensor is sourced from Sony and we have been seeing this particular sensor in a number of smartphones since last year. 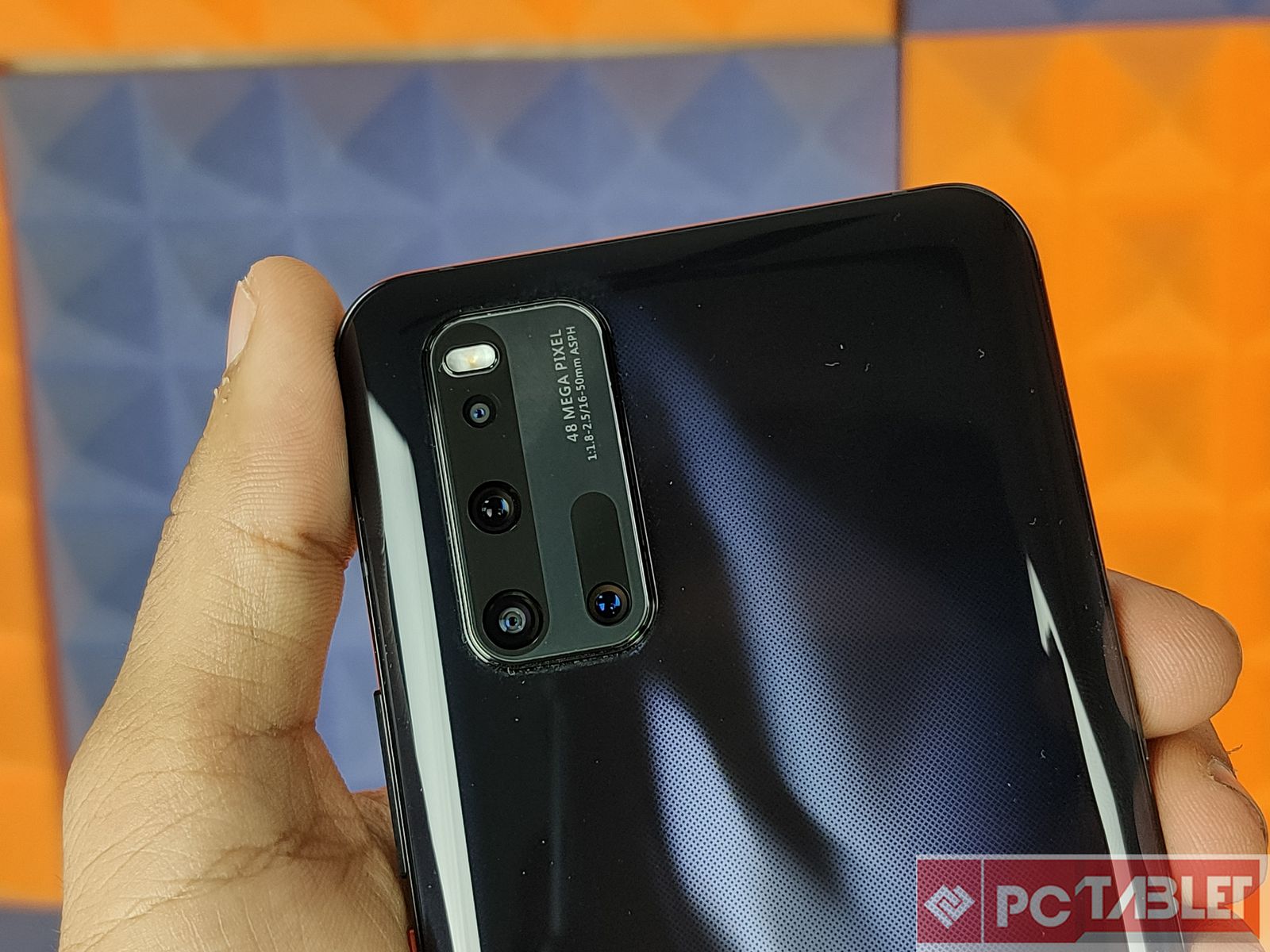 In our tests, we found out the pictures taken outdoors in natural daylight had ample detailing and adequate sharpness. The same can be said for the 13-megapixel 120-degree wide-angle camera which produced promising results. The other 13-megapixel Telephoto lens came with 10X zoom with an additional 10X digital zoom. 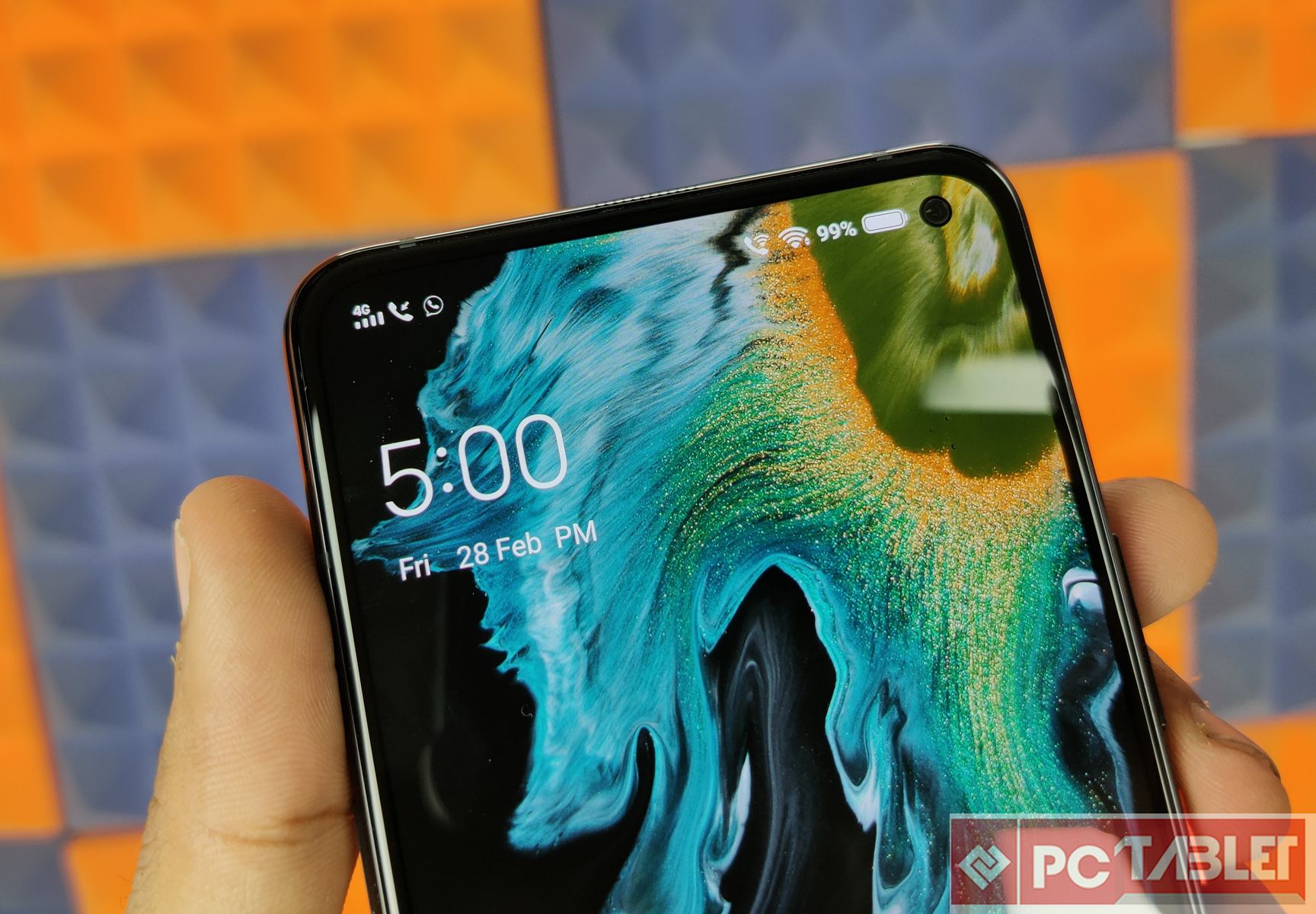 The initial 10X shots we’re on par with other smartphones sporting similar feature but the 20X combined zoom felt unnecessary addition. Coming to the camera app, it seems to be lifted directly from Vivo with the same UI elements and menus. 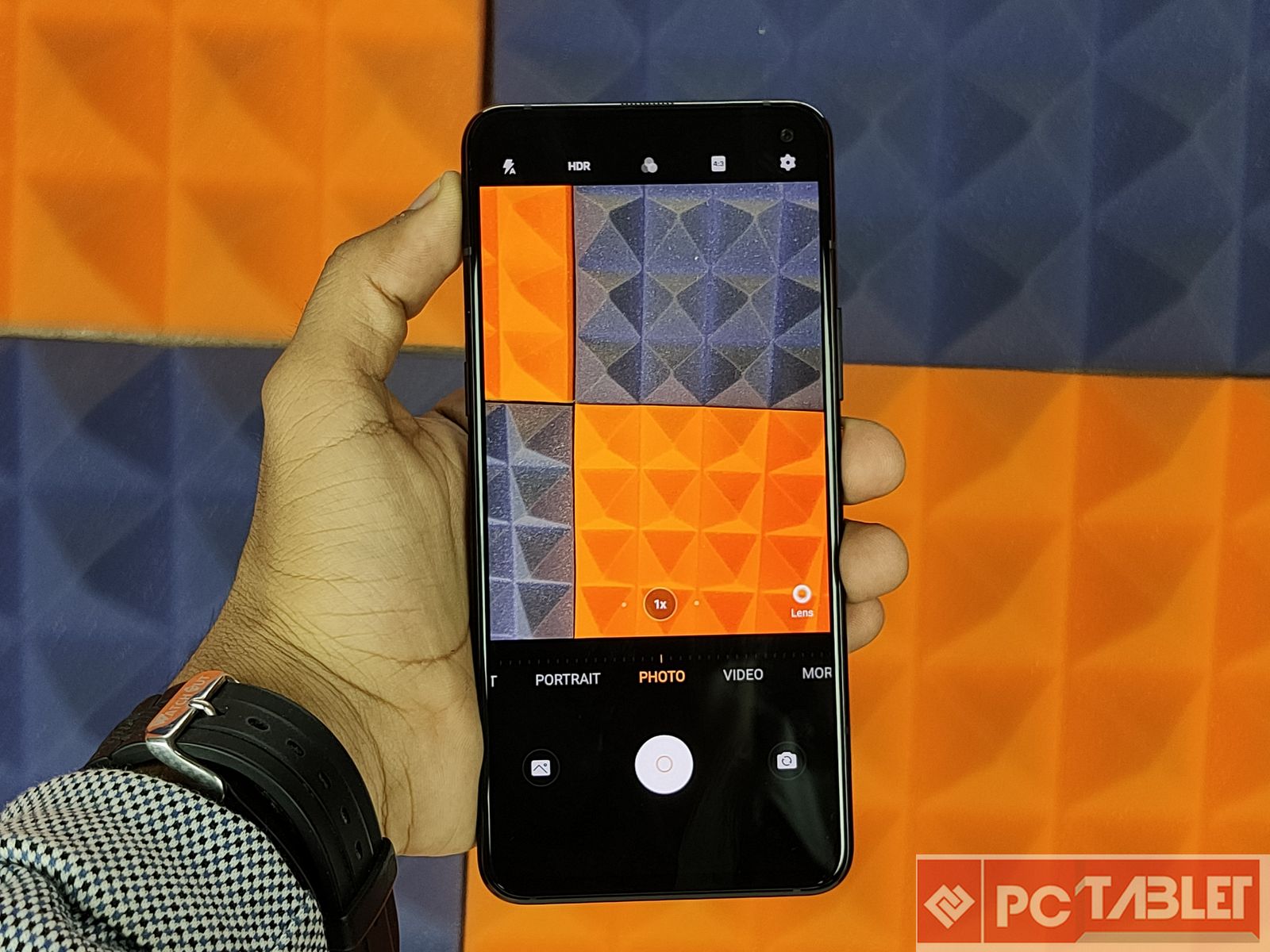 Coming to the battery results, the phone packs in a massive 4,400mAh cell. During our tests, we got an average of 6 ½ hours of screen-on-time with strictly one days’ worth of usage. This is where iQOO needs to work on. 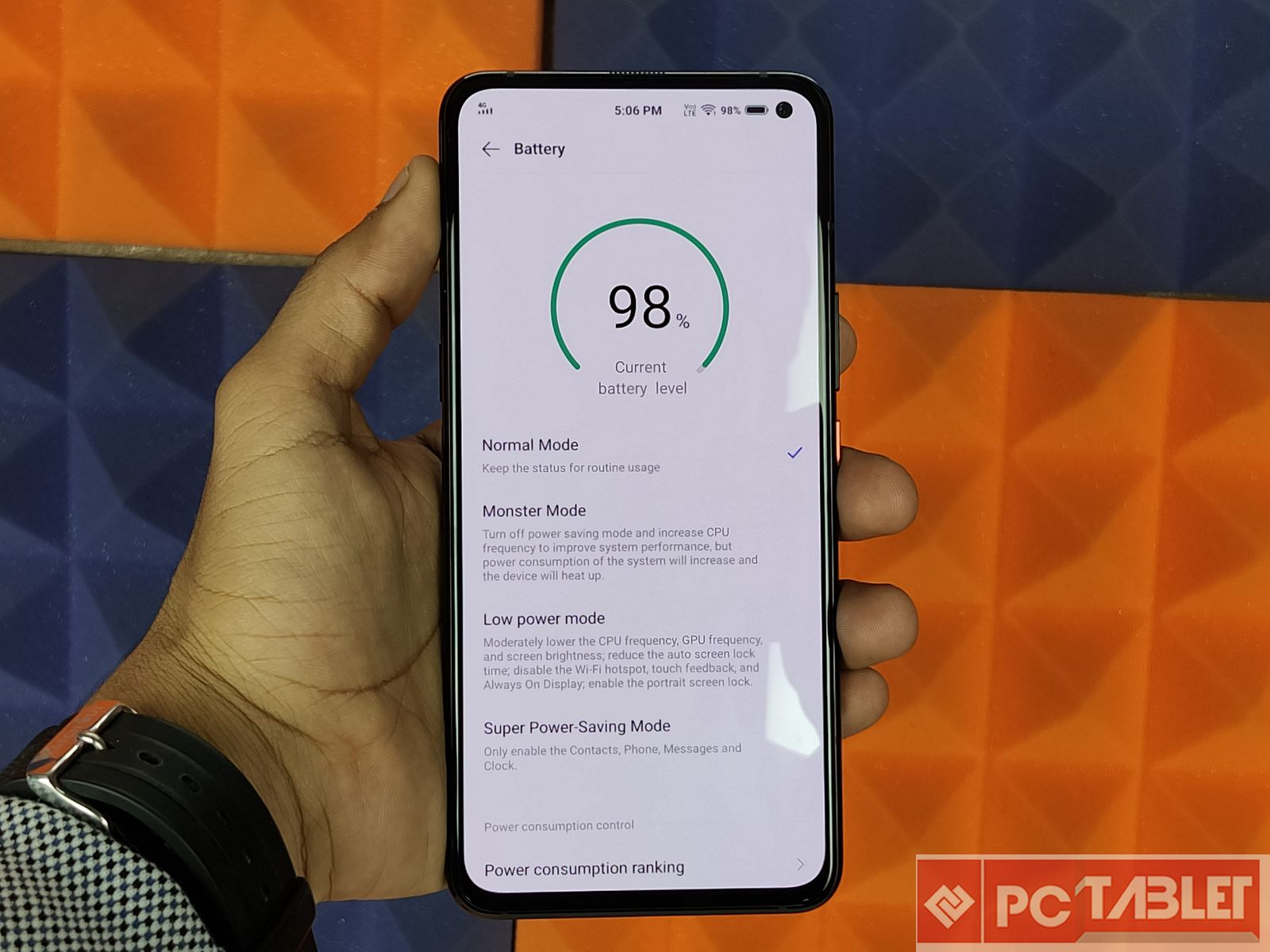 The phone comes with support for 55W fast charging with the charger bundled with-in the package. Using the supplied the charger we were able to fully top-up the battery in under 45 mins with 0-50% being completed in mere 15 mins that insane.

Looking at the value proposition that even the base variant at INR 36,990 is quite much. Performance, cameras, charging, and an enjoyable interface are all spot on. The top model with 5G seems a bit too much currently since there are no working 5G networks available in our region. 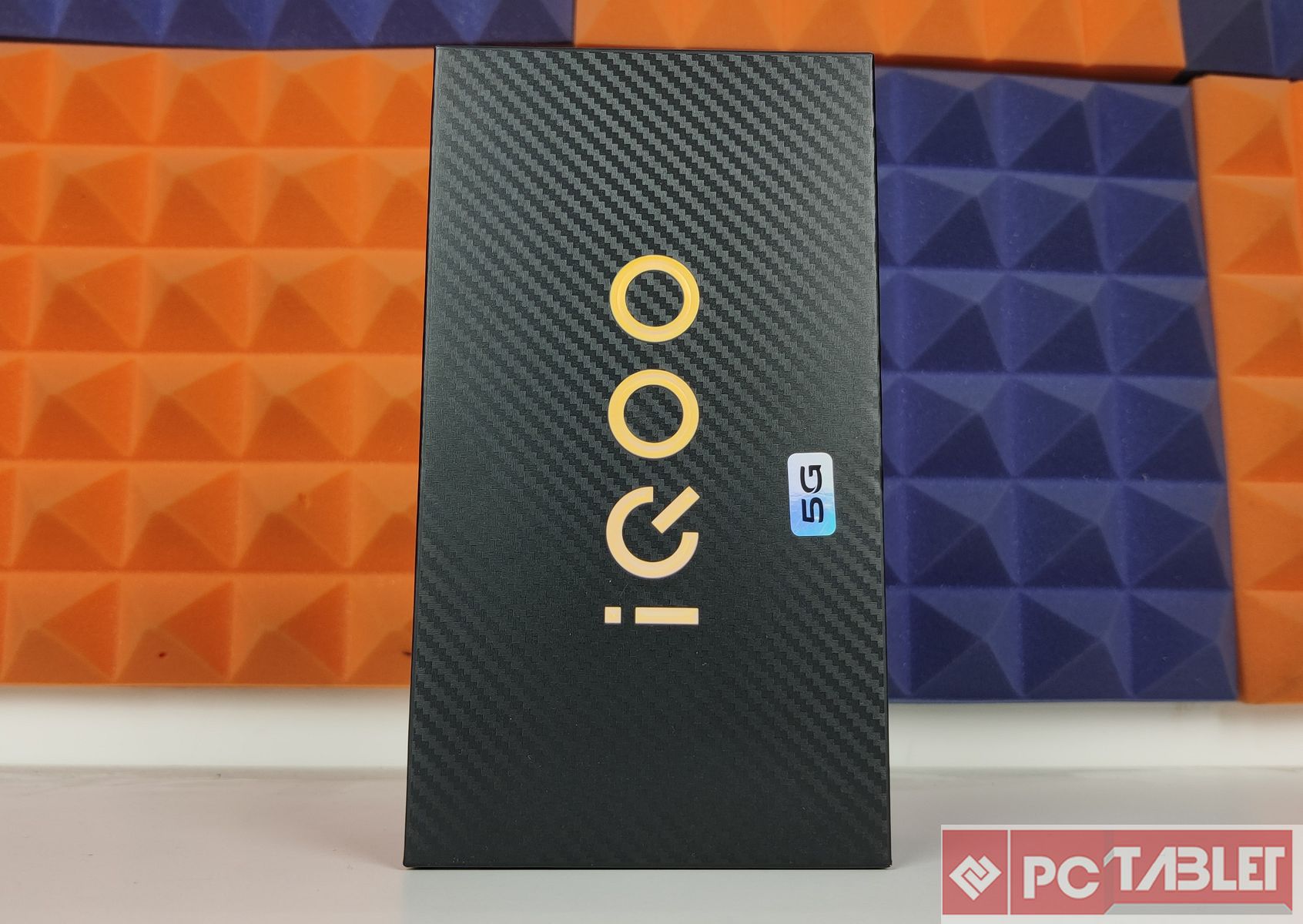 However, not all is well here. iQOO needs to work a little more on the UI and battery optimizations with a slight focus on imaging as well. With the cashback launch offers, the phone seems a great buy if you are not really concerned with a higher refresh rate display that Realme X50 Pro brings to the table.