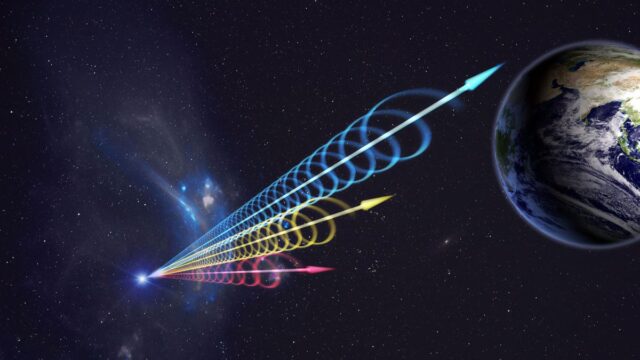 Do Aliens Exist? If the statements of the latest finding are to be believed true; then the answer to this long-standing question may be “YES”. An Indian scientist, working with a million dollar international project “Breakthrough Lister” has succeeded detecting 15 mysterious, repeating Fast Radio Bursts (FRBs), coming from a distant dwarf Galaxy. As revealed by the team of Breakthrough Listen,     on August 26, Saturday, an Indian scientist, named as Dr. Vishal Gajjar, a postdoctoral associate at the University of California, Berkeley, where the Breakthrough Listen is situated; has successfully tracked down the presence of 15 inexplicably repeating pulses, coming from a dwarf galaxy called FRB 121102, located some 3 billion light-years away from the earth.

It has been more than 15 years when the first FRB was recorded and since now, more than nearly two dozen FRBs have been witnessed and documented all through the world. Most often, such Radio Bursts are found to be once in a lifetime phenomenon. But proving this assumption wrong, a team of scientists in 2016 published an article in the journal Nature where they revealed about the finding of repeating radio signals, coming from FRB 121102. After finding the bizarre nature of the galaxy, scientists globally started monitoring and tracking its repeating burst, and now the Breakthrough Listen team finally succeeded in finding out 15 new pulses, coming from the same FRB 121102.

The project carried out by Indian scientists Vishal Gajjar and his team. Researchers conducted five hours long observation campaign, during which they succeed observing the new bursts coming from the 3 billion light years away galaxy. Over five hours of surveillance, the team used Green Bank Telescope in West Virginia and gathered 400 terabytes of data over the 4 to 8 GHz C-band or frequency band, which is usually employed for satellite communications transmissions. The discovery is declared as an Astronomer’s Telegram and is said to be released in a forthcoming scientific journal.

As revealed by Astronomers Telegram, the investigation of the data explored the presence of the new repeating radio bursts and also showed that the source is located in a “heightened movement state. After the detection of the new Radio Bursts, the follow-on examinations and analysis are being encouraged, especially at higher radio frequencies.

It has been more than one and half decades when the first strange Fast Radio Burst was found out, and since now, the nature, creation, and activities of these highly powerful and energetic pulses are poorly understood. Once occurred, the Fast Radio Bursts, or FRBs, lasts hardly for some milliseconds which is the primary reason why scientists are yet failed to understand them fully. Australia-based Parkes Telescope was the first telescope to discover the first FRBs, and now, a number of radio telescopes in the world have been witnessing the presence and occurrence of FRBs.