Huawei has launched the next Kirin 970 SoC at IFA 2017. The company claims that the chipset will deliver the top notch processing with lower power consumption. The chipset is now expected to pack in the upcoming Huawei flagships.

Both these Huawei flagship smartphones; the Mate 10 and Mate 10 Pro are confirmed to be launched on October 16 at an event in Munich. The next gen Kirin 970 chipset comes with built in AI support which enhances the augmented reality experience, head voice commands which overlay graphics, sounds, text, and video in the real time. Notably, this chipset is based 10nm fabrication process and will be produced by the contract manufacturer TSMC (Taiwan Semiconductor Manufacturing Company).

This new chip accumulates the DSP(Digital Signal Processor), GPU, and ISP (Image Signal Processor) at one place rather than on separate chips. This whole unit is known as a Neural Processing Unit (NPU), which is smart enough to optimize users device to offers great processing speed and provide best thermal/power efficiency.

As we look to the future of smartphones, we’re at the threshold of an exciting new era. Mobile AI = On-Device AI + Cloud AI. Huawei is committed to developing smart devices into intelligent devices by building end-to-end capabilities that support the coordinated development of chips, devices, and the cloud. 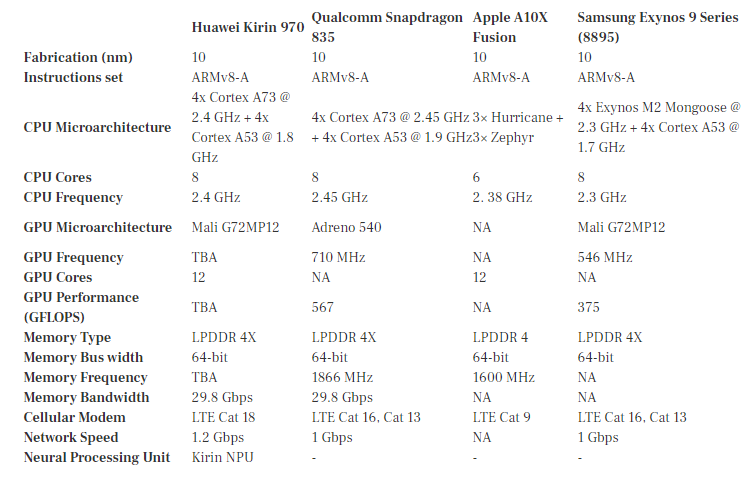 The Kirin 970 packs 5 million transistors and a 12 core GPU for graphics intensive task. According to Huawei, the Neural Processing Unit (NPU) will offer 25x improvement in performance and 50x improvement in overall efficiency. Comparing with the latest generation of flagship SoCs, Kirin 970 comes with a cellular LTE modem of Cat 18. The network speed on Kirin 970 is about 1.2Gbps which are far higher than current high-end chipset offerings.