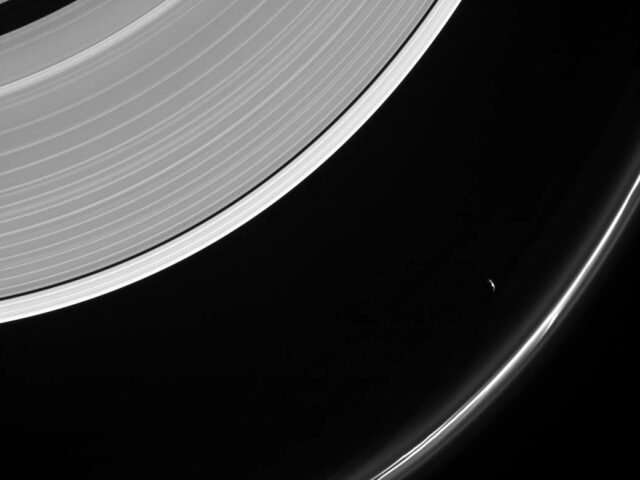 NASA’s Cassini Spacecraft, which is running close to its historic grand finale in September this year, has beamed back the spectacular view of Saturn’s moon Prometheus’ closest position to Narrow F Ring – the separate outermost ring of the planet. In the new image, Cassini has revealed the dominance of Saturnian moon Prometheus on Saturn’s A and F rings. The incredible picture, sent back by Cassini showcased the ghostly rings of Saturn, which are blanketed in “waves and kinks,” coming from the gravitational communications, going on, in between Saturn and its moon.

Cassini Spacecraft, with its Narrow Angle Camera earlier has captured a number of eye-catching views of Saturn and its moons, including Mimas inching closer to bump into Saturn’s rings, belts of features called propellers in the rings, position of Daphnis in the Keeler gap, water jets, moving nearer the south pole of Enceladus, methane clouds, streaking across the misty atmosphere of Titan and Epimetheus, a blemished Saturnian moon. In the previously clicked image, deformations in both the A and F rings of Saturn are visible because of Prometheus’ gravitational influence on both rings.

But this is the first time that the spacecraft has targeted Prometheus and clicked the images of its closest position to the Narrow F Ring. When the picture was clicked, Cassini was stationed at the back of Saturn and Prometheus relating to the sun, standing in front of the moon’s dark side and just a small piece of the sunny northern hemisphere of the orb.

This view stands to face the sun-drenched side of the rings from nearly 13 degrees over the ring plane. The image was clicked in visible light on 13th May 2017 with the narrow-angle camera on the Cassini spacecraft, and the scale of the picture was 4 miles or 6 kilometers per pixel. The view was taken, when Cassini was positioned at an approximate distance of 680,000 miles or 1.1 million kilometers from Saturn.