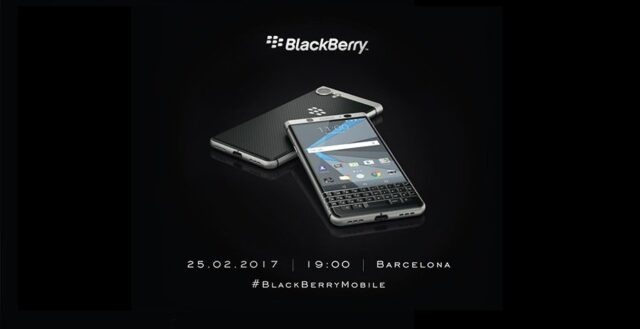 The much anticipated BlackBerry Mercury smartphone is all set for an unveiling at MWC 2017 on February 25, days before the event starts. The Canadian manufacturer has now released a short teaser for the BlackBerry Mercury announcement, which reads that the phone will be revealed at 7:00 pm CET in Barcelona, Spain.

Additionally, the teaser also shows what the handset will look like, showcasing the front and back of the phone along with the famous QWERTY keypad, which you can see in the image above.

A prototype of the BlackBerry Mercury was shown during CES 2017 in Las Vegas last month. Now it appears that BlackBerry is all geared up to announce the handset on February 25, at a press conference days before the event officially kicks-off.

The alleged BlackBerry Mercury smartphone with a physical QWERTY keypad is said to pack a 4.5-inch AMOLED display with a 1620 x 1080 pixels resolution, which amounts to a pixel density of 420 ppi, and an aspect ratio of 4:3.

Under the hood, the BlackBerry Mercury is said to run a Qualcomm Snapdragon 625 processor bundled with 3GB of RAM.

Other rumored specs include 32GB of built-in storage, a fingerprint sensor, along with a 3400mAh battery. Also, the smartphone is said to run Android 7.0 Nougat out-of-the-box.

To recall, BlackBerry recently confirmed that it would no longer manufacture its own devices. The Canadian manufacturer is going the Nokia way, by allowing third party OEMs to produce and sell handsets under the BlackBerry branding. The company recently inked a deal with China’s TCL to manufacture and sell smartphones carrying the BB brand.

Back in January, TCL Executive Steve Cistulli has posted a short teaser video of what is believed to be the alleged BlackBerry Mercury smartphone. The video reveals a smartphone with the classic QWERTY keypad, and the smartphone itself looks very similar to traditional BlackBerry phones of the past. According to the Steve Cistulli’s post, the phone sports an ‘impressive design’ that’s ‘distinctly different.’

BlackBerry Mercury is expected to be announced on February 25 at MWC 2017 in Barcelona. While earlier rumors about the handset suggest it’ll be will be made available on Verizon in the US when it launches.

The information was revealed by smartphone tipster Roland Quandt, who posted on Twitter that “BlackBerry “Mercury” BBB100 is coming to Verizon in the US.” We expect more details about the smartphone to appear on the web, before the official BlackBerry Mercury announcement on February 25. Till then, keep checking this space for more updates.