Addressed to Amit Jain, head of operations at Uber India, and Travis Kalanick, global chief executive, the petition urges Uber to use surge pricing when the company cannot meet customer demand and not as a regular pricing model. It also seeks to regulate surge pricing in such a way to benefit customers.

While Uber hailed surge pricing model stating that it is in the interests of the customer, Parmani mainly created the campaign “to get Uber to respond and regulate their surge pricing.” Moreover, Uber revealed that the company adopts surge pricing when there is a shortage of cabs. 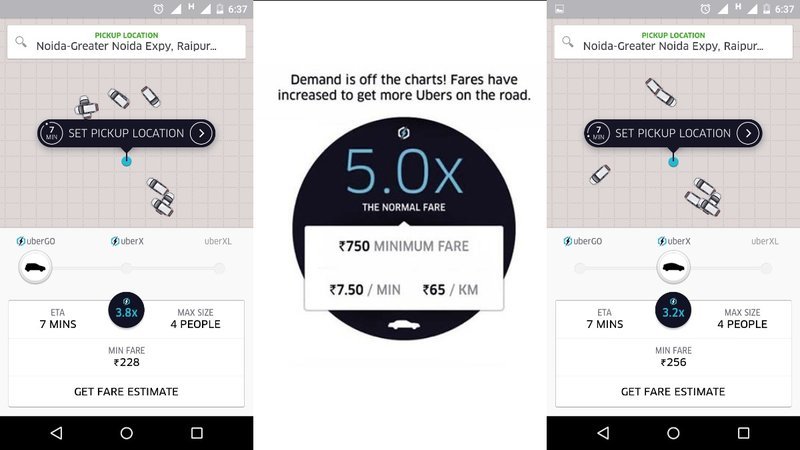 “I had more than 8 Uber cabs available around me and still had to pay 3.8x surge pricing (Which could be clearly seen in the screenshots),” says Nitish Parmani on Change.org

The primary motivation behind the creation of online campaign by Parmani is from a recent incident where Uber charged 2.6x more than the estimated total cost from one of his friend during a trip. He argues that his friend was forced to pay 3.8x more than the actual fixed rate even though there were 8 Uber cars available in that area.

Although Uber claims that surge pricing attracts more drivers during peak hours, Parmani had to pay 1.5x surge pricing in an afternoon, which is not a peak hour time. Hence, the claim made by Uber turned out to be false. Meanwhile, the excess charge goes straight into Uber’s pocket as rightly claimed by its drivers.

According to sources, Uber provides peak-hour incentives to its drivers and then retrieves the money back by overcharging its customers 3x, 4x, 5x and even 7x times the cab fare.

As of writing this, nearly 35,737 supporters have signed the petition to curb the menace of Uber’s unfair pricing practices. We reached out to Uber’s competitor, Ola and they pointed out that surge pricing will be adopted when there is an excessive demand for cabs in a particular area.

Previously, Uber had itself created online campaigns not only against the Maharashtra Government but also against the respective authorities in London and New York to protest against the rules framed by local authorities.

Our take on this issue is that government should draft legislation to protect the interest of people against surge pricing. While the cab services are essential for our living, it is the responsibility of the government to make sure that company is not adopting any unethical practices.