For the last few days, the tech portals were loaded full of content about the new Freedom 251 smartphone launched by a Noida based company, Ringing Bells on February 18 at an event attended by Union Defence Minister along with other political leaders and tech enthusiasts. However, there are doubts about the credibility of the company and Freedom 251 could be another fraud scam like Aakash Tablet with the expected loss amounting to over Rs 2500 crores.

Launched under the Digital India initiative, Freedom 251 is the second smartphone from the company, the first one being Smart 101. Moreover, the handset has been widely marketed with the Make in India tagline.

Even though the company has taken down the order system due to an unknown technical problem, you should be little careful before placing an order for Freedom 251 once they resume.

We inspected the images of various other smartphones on the market and noticed that Freedom 251 resembles the design aesthetics of the Adcom Ikon 4, which is already available for Rs. 3999. Moreover, Ringing Bells has mentioned that technical support will be provided by Adcom. If Freedom 251 is a blatant copy of Adcom Icon 4 or it is the Adcom Icon 4, then the device might not be manufactured under Make in India initiative and it amounts to misuse of the trademark owned by Government of India.

Check these images uncovering the truth of Freedom 251.

There is also a possibility of Adcom suing Ringing Bells if they have stolen the original design from Adcom. If this happens then the production of Freedom 251 will come to a halt and the fortune of people who have placed orders for the phone will hang in the balance.

Freedom 251 is being sold by the same company, who previously took orders for Smart 101 handset from people. With almost same features, the company never fulfilled the orders to all those who ordered the smartphone. Moreover, there are reports that customers never got confirmation after placement of orders.

According to industry analysts, it is not feasible for a company to sell a smartphone at Rs. 251 when the cost of spares along account to Rs 1,500. There are several smartphones on the market with the same features and are priced at Rs. 3,000.

With strong reasons to doubt the authenticity of Freedom 251, the LCD, digitizer and front bezel alone will along cost $35. On the other hand, Indian Cellular Association has set a minimum price limit for a 3G enabled smartphone at Rs. 2,700. Hence, a price tag of Rs. 251 for a 4-inch IPS display smartphone looks suspicious.

With over 5 crore people expected to book Freedom 251, because of the hype it generated, the company will earn 12.5 billion rupees. Imagine a situation where the company vanish one fine morning. You will not only lose Rs. 291 (Rs. 40 delivery charges) but also will not be able to keep track of the company people.

Even though you have paid around Rs. 291, it is still your hard earned money which you can’t afford to lose. At that time, you will shy away from disclosing the fact that you have ordered the handset and will move on just like what people did with Aakash tablet.

Yes, Rs. 250 is a small amount for one, but look at the kind of money Ringing Bell will receive from the people collectively. At this price point, 5-10 crore bookings are achievable in the population of 125 crores. And that alone will make company over Rs. 2,500 crores! And who will care if they do not deliver or refund? No one!

The company had invited Union Defence Minister and other political leaders for the event. That doesn’t mean they can’t fraud the people. You should remember the curious case of Aakash tablet. A simple Google search with the keyword ‘Aakash tablet scam’ will throw open all facts.

Even if you receive Freedom 251 in good condition, the cost of repair in case of any fault will be higher than what you paid to obtain the product. Moreover, there is a huge risk involved since the battery is prone to explode.

Meanwhile, the company has not disclosed the SAR value, which is done by all manufacturers of smartphones. We posted a query regarding this on the official Facebook page of Ringing Bells but they haven’t replied with the correct values. If the SAR value is higher, then the smartphone will be highly dangerous to use both for adults and kids.

A question which remains unanswered here is that why the company is not accepting orders after the manufacturing of Freedom 251. Initially, the company can produce 50,000 units and sell them. This will ensure trust among people rather than paying a low cost and waiting for over 4 months.

That being said, it’s up to you to decide whether to place an order for Freedom 251. If you have paid and placed an order then you will have to rub your fingers for the next few months till you receive the smartphone. Ideally, you should not be part of a group who have paid for the smartphone and got frauded. In the end, you might never receive the smartphone or receive a faulty phone with the cost of travelling to service center alone will cost more than Rs. 300.

Associate anything with the patriotism, Nation, Tricolor Flag, and underprivileged sector of the nation, and fool the masses in buying anything. Don’t be fool and be wise, nothing comes cheap in this world! 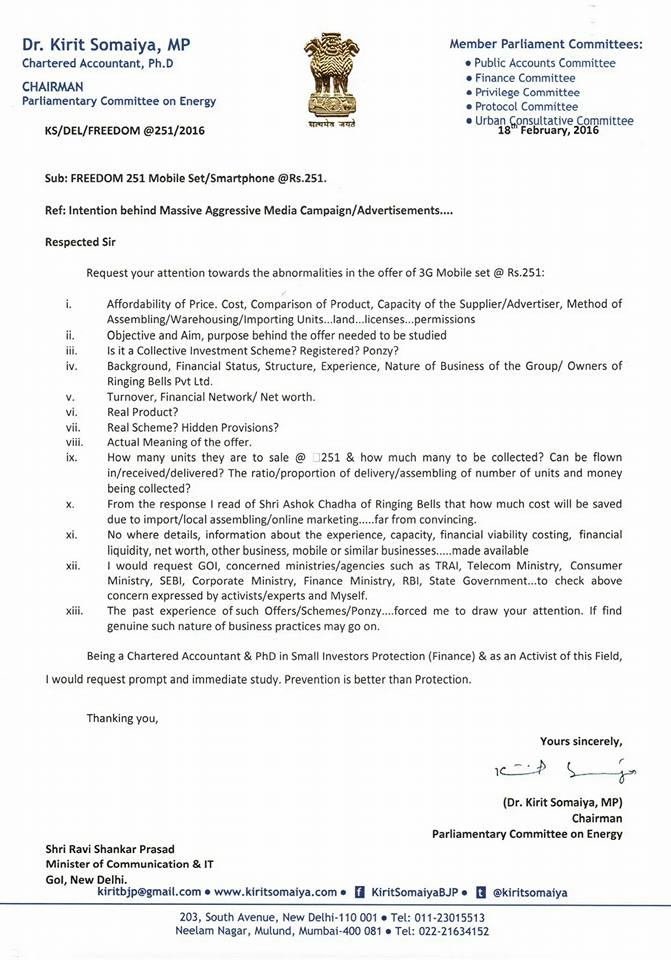 Update: Upon request of MP, Dr. Kirit Somaiya, Govt. of India has ordered for a legal enquiry on Rising Bells to testify the company’s claim of selling Freedom 251 smartphone for Rs. 251.