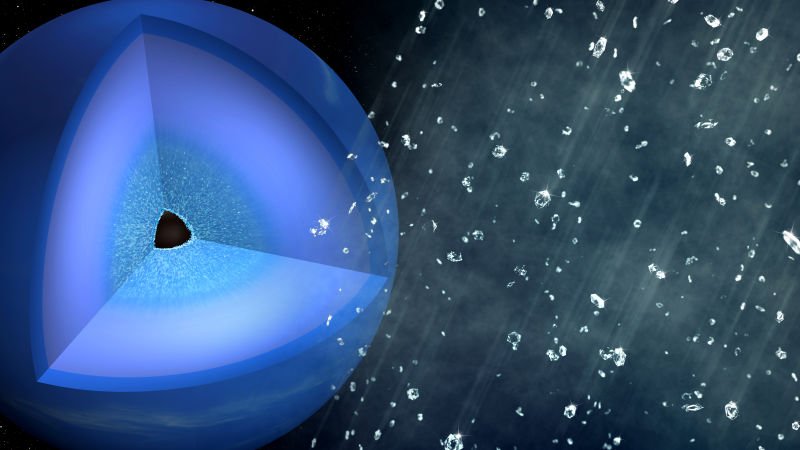 A team of international scientists from Stanford has made the most stunning and surprising discovery of the century – it has been raining diamonds on the two most mysterious planets of our solar system – Neptune and Uranus. A team of researchers from the University of Warwick, in one of their recently published journal, has confirmed that sparkling diamonds have been pouring on giant ice planets like Neptune and Uranus. Researchers by recreating the lab simulations of the theorized fall of diamonds of ice giants like Uranus and Neptune have confirmed that the long-standing theory is entirely true.

A team of scientists from the United States, the United Kingdom, and Germany have succeeded in recreating the environmental conditions found deep inside the icy giant orbs of the Solar System and found the formation of thousands of tiny diamonds. Since long, it has been thought that the extremely high pressures on planets like Neptune and Uranus are responsible for squeezing the carbon atoms in their atmosphere, causing the diamond drizzle to fall on the planets’ surface, which later perhaps bundles in a sparkling mass around the core. Now, through the lab simulations, the researcher team has confirmed that diamond which is extremely rare to found and costs crores on earth are raining on the planets like Uranus and Neptune heavily.

For the experiment, researchers used an instrument, called “Matter in Extreme Condition” and socked a skinny polystyrene page with a laser blast which eventually created an extreme pressure of up to 150 gigapascals. That laser animated the material to nearly 6,000 Kelvin, and despite being an incredibly hot temperature, it failed to melt the diamond. As the polystyrene is primarily a hydrocarbon polymer, it easily fell apart into its atoms of hydrogen and carbon which then are compacted and form an amazingly short moment; this simulation results in nano-diamonds to form.

As now scientists are now capable of reproducing an environment akin to the planet’s atmosphere, located some 10,000 km in the core of Neptune and Uranus, further experiments and researchers are more likely to reveal if there are some more stable options ahead of diamond precipitation. The complete details of the study are published in the journal Nature Astronomy.

7 hours ago
There are no comments yet No comments