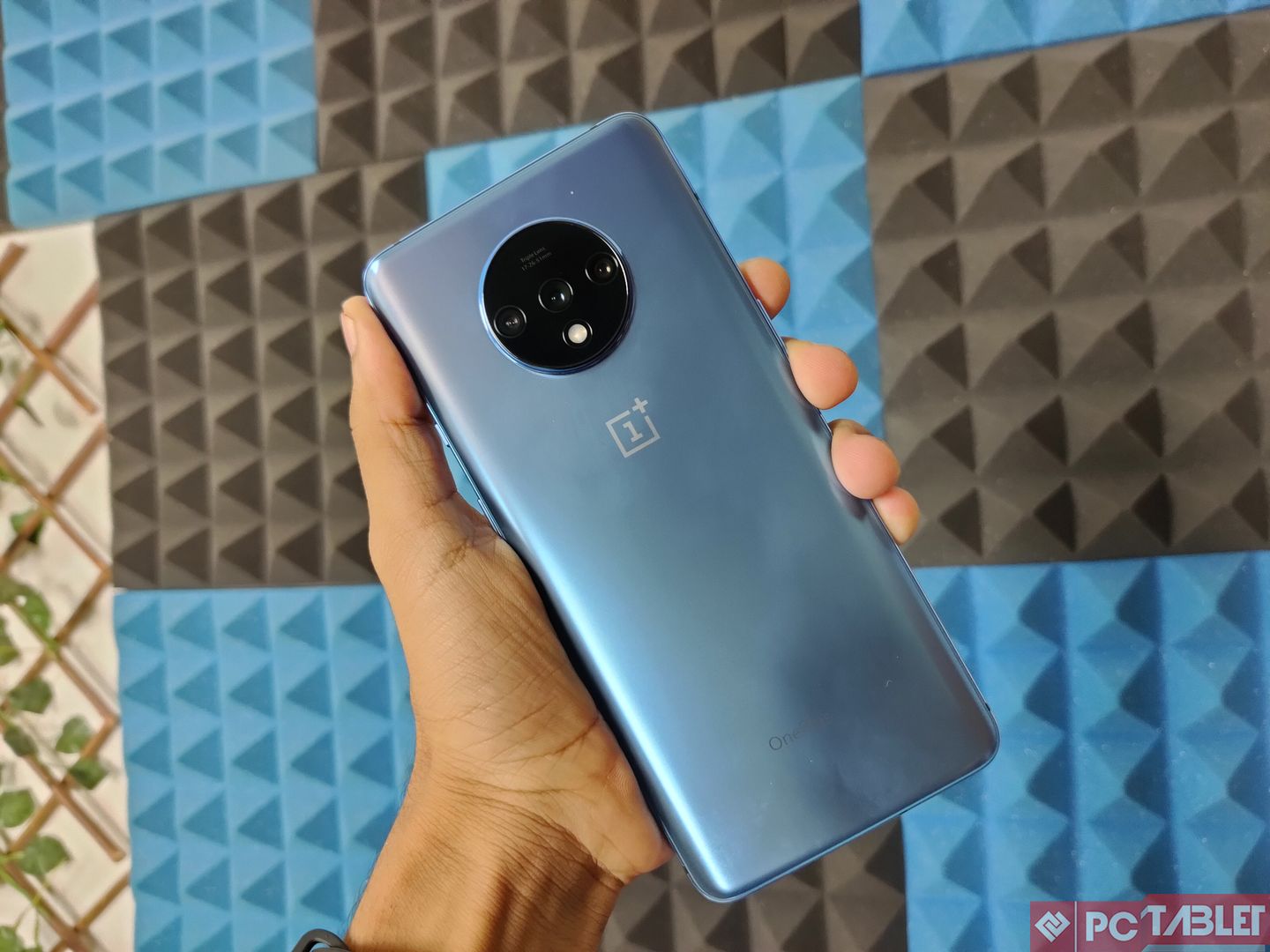 Catching up with the new tradition of launching four smartphones a year, OnePlus lately launched the OnePlus 7T in India. At first glance, the 7T looks like a toned-down version of OnePlus 7 Pro (review) with a few compromises, and a much lower price. Having said that, is it really worth buying amidst fierce competition from Asus and Redmi? Well, let’s check out the same in our detailed OnePlus 7T review.

Before starting with the OnePlus 7T review, let’s have a glance at the phone’s specifications, pricing and things we get with the device.

Since the OnePlus 6, the company has been using glass panels with a matte finish for phone’s rear. And OnePlus 7T is no different except for the changed design and new gradient colours.  The phone now gets triple cameras at the rear, housed in a circular module which differentiates it from the previous generation. Now, it is quite large with a prominent bump which might not be liked by everyone.

The phone is currently being offered in Frosted Silver and Glacier Blue options, but more colours may join in future. The latter we have here gets a Blue hue with a subtle gradient flow, which gives it a very premium appeal on offer. And while the back gets smudges here and there, it’s quite grippy to hold.

Flipping the phone over to the front, you get a typical dot-notch display in a segment where all major companies are pushing notch-less panels. Plus, it’s a flat-screen, i.e. no fancy curves here. Following the same, the phone doesn’t get a pop-up camera either. It’s clearly evident that both of these features are limited to the Pro model.

Anyways, the bezels are quite thin, and the phone looks sleek for the most part. Nevertheless, it’s quite hefty at 190grams and certainly not the phone you’d love using single-handedly.

Talking of ports and placements, the power button and textured alert slider are given on the right while volume rockers are present on the left. The dual SIM tray, speaker and USB Type-C port are located on the bottom. Evidently, there’s no 3.5mm audio jack on the phone.

The OnePlus 7T gets a 6.55-inch Fluid AMOLED display with FHD+ resolution and 20:9 aspect ratio. While the 90Hz refresh rate is adopted from the OnePlus 7 Pro, it still is a full-HD panel with no fancy 3D curves found on the latter. OnePlus has also reduced the size of the notch by almost 31% and the tall aspect ratio slightly improves the in-hand comfort of the device.

The panel’s quality is great with apt sharpness, impressive viewing angles, punchy colours and deep blacks. Sunlight legibility is good as well, and we didn’t face any issues while using the phone even under harsh sunlight, thanks to the peak brightness of around 750 nits (adaptive brightness enabled).

When turned on, the 90Hz refresh rate makes the phone feel smoother and faster, especially when navigating through UI, or playing certain games. However, a wider adaption is required to enjoy it to the fullest. In all, while the display is great for binge-watching, it’s still not the best in the segment, provided that the ROG Phone 2 gets a 120Hz panel, aiding for a better experience at certain instances.

Just like other OnePlus smartphones, the OnePlus 7T comes with top-of-the-line hardware, packing latest Qualcomm Snapdragon 855+ SoC at its core. It is further coupled with 8GB of RAM and 128/256GB storage configurations. The 7T also gets UFS 3.0 storage, carried over from OnePlus 7 for faster read and write speeds.

Now there isn’t much of a difference between Snapdragon 855 and 855 Plus. For starters, the latter is basically an overclocked version, propounding about 4.2 per cent improvement in terms of CPU performance and 15 per cent faster graphics rendering, as on paper.

As far as the real-world performance is concerned, the phone simply flies through anything you throw at it. It feels super snappy and agile in almost all tasks, be it opening heavy apps or multitasking with a dozen of them. The speed is also evident while browsing the web, clicking pictures and flicking through apps.

Plus, the phone boasts of liquid cooling, which keeps the thermals under control even when stressed over long hours of gaming. We tried playing PUBG Mobile at HDR and ultra settings for an hour, followed by a couple of matches in COD Mobile and there were no issues whatsoever. Frankly speaking, 7T is a no brainer when it comes to hardcore performance.

On the software front, the OnePlus 7T runs OnePlus’s own Oxygen OS 10 based on Android 10. And it is indeed the best Android UI you’ll ever find in the market, all thanks to the near-to stock appearance while still offering almost all necessary features.

There’s a dark mode with an option to play with the accent colours, a built-in screen recorder, app twinning, and smart caller identification, accompanied further by a full-fledged App locker. The home screen involves a side shelf, which allows you to create notes, see weather information and contains recently-used apps, contacts, and more.

Apart from the already familiar Gaming Mode, there’s a brand new Fnatic mode which takes the gaming to another level by blocking all notifications, stopping useless background processes, and directing all resources on your game. Then there’s Zen Mode which kind of locks down your phone for 20-60 minutes (based on your selection) while only allowing emergency calls and taking photos.

For photography, the OnePlus 7T gets a total of three cameras at the rear. This includes a 48-megapixel primary camera with f/1.6 aperture, laser autofocus and OIS, followed by a 12-megapixel 2x telephoto shooter and a 117-degree16-megapixel ultra-wide camera. For selfies, there’s the same 16-megapixel unit found on the OnePlus 7.

The primary camera shoots very good images in daylight with an ample amount of detail (could’ve been better), sharpness and colour accuracy. The dynamic range is good as well with balanced levels of exposure. However, the camera starts to struggle in low-light. Images turn out soft, and colours tend to go off the track.

The wide-angle camera too produces passable results but only in daylight, for apparent reasons. Also, wide-angle shots tend to suffer from distortion around edges, so keep a note of that. The 2x telephoto shooter, as expected, is used only when you’ve got a decent amount of light on offer. It’s great for zooming and produces good quality lossless shots. In comparison, the OnePlus 7 Pro gets three times optical zoom with optical stabilisation.

Just like the rear camera, the selfie camera hasn’t seen any major improvements from OnePlus 7. Yet, it clicks good pictures in daylight with a great amount of detail on offer and well-balanced skin tones and exposure. Plus, it produces good results even in low-light indoors.

The phone can record 4K videos at 60fps with excellent video stabilisation. However, for some reason, OnePlus has skipped on video recording feature for the wide-angle camera, which is a huge disappointment.

The OnePlus 7T packs in a 3,800mAh battery- a minor upgrade over OnePlus 7’s 3,700mAh cell. But note that it’s using a 90Hz panel with an overclocked processor which makes up for fairly average battery life.

As a result, you’ll have to plug it in by the evening or night based on your usage. Now, you may turn off 90Hz mode to get the maximum juice but its simply not justified given that its one of the main highlights of the device. Thankfully, OnePlus’s 30W Warp Charge charges the phone really fast, from 0 to 70% well under 30 minutes. A full charge, on the other hand, takes a couple of minutes over an hour.

Coming to the other aspects, the given optical in-display fingerprint scanner works accurately well, and we didn’t face any issues with regards to reliability. Face Unlock too is very fast but we won’t trust that much on the security front.

Furthermore, the phone uses earpiece as its secondary speaker, and the overall sound output is rich, clear and loud. We used the handset with Airtel and Jio for a couple of days in conjunction and had no issues with regards to network reception or call quality.

OnePlus 7T Review Verdict- Should you buy it?

The OnePlus 7T is an almost perfect smartphone with an amazing display, top-notch performance and great software experience. Plus, it gets a very premium design, coupled with superfast charging, stereo speakers and certain quirks which make up for a great overall experience.

However, just like other phones, it lacks in certain departments, including battery performance- well, it doesn’t last for too long on 90Hz. Also, while the camera is good enough, it’s no way close to the likes of Pixel 3, Samsung Galaxy S10 or iPhone XR. So keep a note of that. As an alternative, particular gamers can have a look at the ROG Phone 2, which offers a lot for the price including gaming aesthetics, 120Hz display, and a massive 6,000mAh battery.