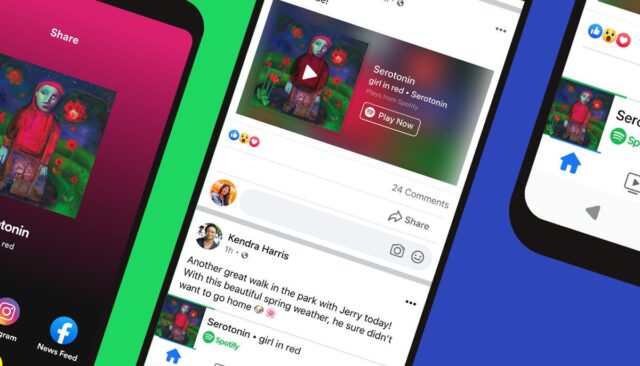 Spotify announced the launch of a new Facebook-integrated mini-player feature that comes embedded within Facebook and allows users to listen to songs from right within the social site itself. This will save users from having to switch apps for the same and is the result of a new found partnership between the social media giant and the Sweden-based music streaming site. Spotify had earlier introduced the feature in other parts of the world but the same is now available to users in India.

The mini-player feature is available on both iOS and Android. Users log in to their Facebook account as usual where they have access to the mini player. The other obvious advantage here is that Facebook users will be able to share the songs they have just listened to with their friends and associates or comment and react on those as well.

Further, the mini-player feature is going to be available to both paid and free subscribers of Spotify. Free users too will be getting the same great experience interspersed with ads, similar to what users would have got had they listened directly off the Spotify app itself. In that sense, the mini-player can be considered a mini incarnation of Spotify that would be accessible from right within Facebook.

This should make for a win-win situation for both the social media as well as the music streaming company as both can leverage on their individual popularity to attain collective growth. As it is, Facebook is already extremely popular in this part of the world while Spotify has started operations in India only in 2019. The music streaming company meanwhile stated they are extending their ‘Dil Filmy Toh Suno Filmy’ where artists are able to interact with their fans directly via the mini-player experience.

Using the mini-player also couldn’t have been simpler. All that they need to do is hit the Play tab on the song that their friends and associates have shared on their Facebook news feed. First time users will have to consent to use the mini-player by tapping on the Connect button that appears. Another prerequisite is that you will have to be logged in to their Spotify app.

Spotify has recently updated its Wear OS app that allowed Premium subscribers to download and play media even when they are offline. Users will be able to listen to the media via their wearables themselves though this will only work with those devices running Wear OS 2.0 or higher.