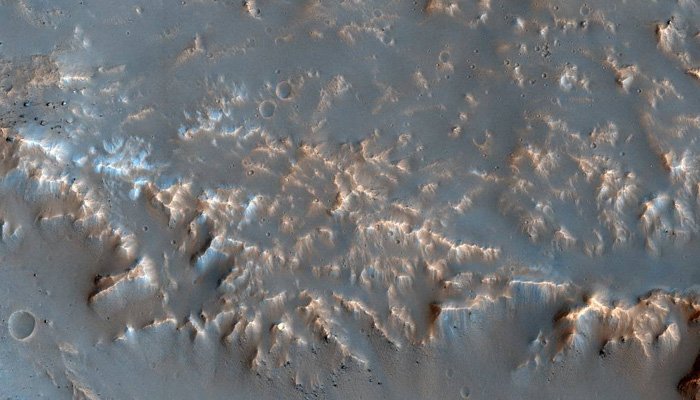 NASA has just released a picture of an unnamed elliptical crater on the Red Planet. The picture was clicked by the High-Resolution Imaging Science Experiment or HiRISE on board the Mars Orbiter which has been in orbit around the planet since March 2006 and beaming images and data.

According to a release by NASA, the crater is located in the Terra Sabaea. The Terra Sabaea is a large area on Mars and covers some 2,900 miles at its widest part. It has been named after a feature on the planet and the new crater points out to the complexity of the ejected materials formed as a by-product of the impact process. Much of the rough surface of the red planet is composed of similar features.

According to a release by NASA, the impact took place on the slopes of a much larger crater which itself must have been formed by an impact with a larger object. The crater looks elliptical, but it is not because of the angled impact. This has made the crater condensed along the slope and elongated perpendicular to the slope. The impact would have melted material from the smaller crater, and it would have preferentially deposited along the slope towards the base of the larger crater.

The deposit hints at a complex formation and emplacement history and also gives an idea of the worsted surface feature of the Red planet. The ejecta deposits can be seen along the western side of the 10 Km impact crater within a gigantic crater almost 60 kilometres wide. The central part also shows a dome-shaped portion of the ejecta blanket from the smaller craters.  There is a dense network of tiny ridges which can be seen along the crater.