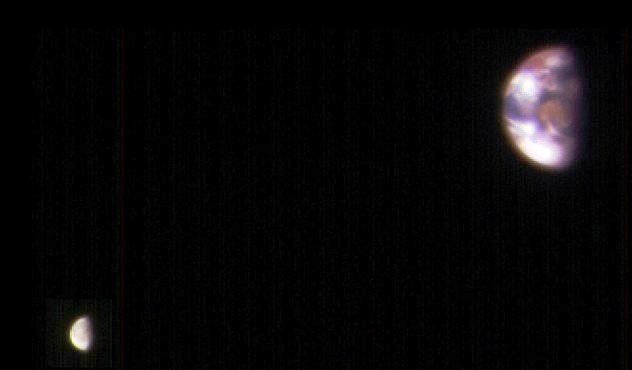 NASA has released a breathtaking picture of the Earth as seen from Mars. The image shows the Blue planet in all its glory with the continent of Australia clearly discernable. The only satellite of Earth is also visible, and the relative size of the moon is also clearly apparent.

The picture was taken on November 20, 2016, by the HiRISE camera aboard the Mars Reconnaissance Orbiter. The image was prepared by combining two different exposures. The two images were taken using different exposure parameters. The Moon is much dimmer and therefore required a higher exposure setting than Earth.

Australia is clearly visible in the form of a reddish colored feature in the center of the picture. The images were taken from a distance of 127 million miles from Earth. The image was taken to calibrate the camera aboard the Mars Reconnaissance Orbiter because the reflected light from the Moon’s Earth-facing g side is well known.

The combined view also shows the correct position of the two bodies with relation to one other. The Moon and Earth are separated by a distance which is 30 times the diameter of Earth. The two cosmic bodies appear closer than they are. The picture was taken at a time when the moon was almost behind Earth to be able to visualize the Earth-facing side of the moon.

The Pictures were taken by the HiRISE or the High-Resolution Imaging Science Experiment camera. It is reflecting telescope and is also one of the largest which has been taken into space with a resolution of 1 microradian (μrad). The Orbiter is located at the height of 300 kilometers. Images are taken in three color bands between blue-green to near infra-red band.