ISRO to launch 104 satellites into space in one go,28-hour countdown begins 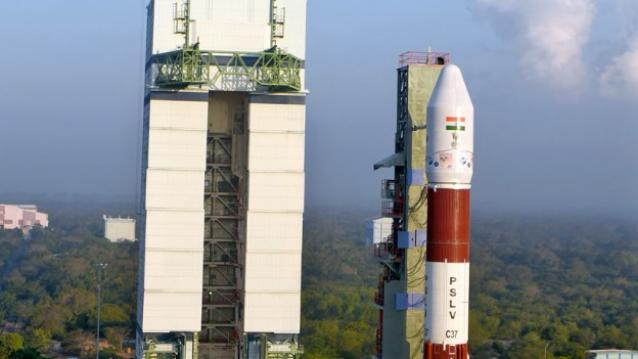 ISRO is ready to with its most ambitious launch of a record 104 satellites into space. The 28-hour countdown for the launch of the PSLV-C37/Cartosat2 mission has started. The propellant is being pumped into the rocket. ISRO is relying on the trusted workhorse PSLV to complete this achievement.

The latest mission will see PSLV launch the 714 kg CARTOSAT-2 earth observation satellite followed by 103 other satellites in a synchronous order. The 103 satellite weighs 664 kg at liftoff and will be established in a Sun-synchronous orbit.

The 101 satellites which are being launched as part of the arrangement by Antrix Corporation Ltd (ANTRIX) the commercial arm of the ISRO. Of these 96 belong to the US, while the rest belong to UAE, Israel, Kazakhstan, Netherlands, and Switzerland. There are two nano satellites which are made by Indian firms.

The CARTOSAT-2 series is the primary payload and is akin to the earlier satellites of the same series. The images will find application in town planning, coastal land use, road network monitoring, disaster monitoring, and surveillance.

ISRO has got the government’s nod for some future missions. It includes a mission to Venus, a revisit to Mars. The Mars Orbital Mission or Mangalyaan is already orbiting the red planet and sending back data. The next big step for ISRO will be Chandrayaan II which will also feature a rover to be sent to the moon. ISRO has already become a leading space player globally, and its services have been touted to be one of the most economical in the space hardware launch market. ISRO has been rewarded for its hard work, and the finance minister has allocated a massive 23% increase in the budget for the Space Organization in the current budget.