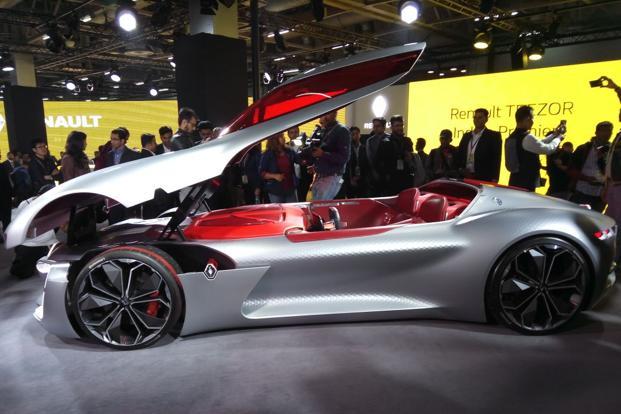 The biennial auto extravaganza, the Auto Expo 2018 is off to a grand start and Renault has just taken the wraps off of its brand new Trezor all-electric super car concept. And true to what concept cars have always stood for, the new Trezor is all about superlatives, be its beauty, style, design or the sheer engineering that has gone into it.

Essentially a grand tourer, the Trezor looks dramatic from almost any angle. However, looks apart, what can easily be considered its most standout feature is the entire top of the car which includes the roof as well as the front hood that is made of a single piece of carbon fibre and is attached to the main body via steel tubes.

Though perhaps unwieldly from a practical point of view, the above design theme as well as the engineering behind it can still be considered the most unique aspect of the car. One glance at it and you know the Trezor is cut above the rest.

The super car otherwise sports dimension of 4700mm in length, 2180mm in width while standing just 1080mm in height. Those makes the concept car to have quite an imposing street presence though it still is surprisingly light at just 1,600 kilos. A set of 21-inch rubber at the front and 22-inch at the rear connects the two-seater car to the ground.

Power comes from an electric motor that has been lifted straight out of Renault Formula E racing car and has 350 hp and 380 Nm of torque on tap. All of that is enough to propel the car to three figure speed mark from rest in under 4 seconds.

That is not all as the Trezor also boats of regenerative braking technology as well which means the battery gets charged each time the brakes are applied. No mention though about the battery size or how long the super car can sustain on a single charge.

As for the interiors, those have been done up in a shade of bright red. That includes the seats to the dashboard and everything else, all of which have been covered in leather. The steering wheel too matches the futuristic appeal of the car and features three screens displaying the various controls of the car. Otherwise, there also is a large ‘L’ shaped display that serves as the infotainment system, besides apprising the occupants of the status of all the controls of the car.

Unfortunately, no matter how alluring the Trezor might look, there is no surety the super car will ever be a market reality. But then, concept cars are just that.