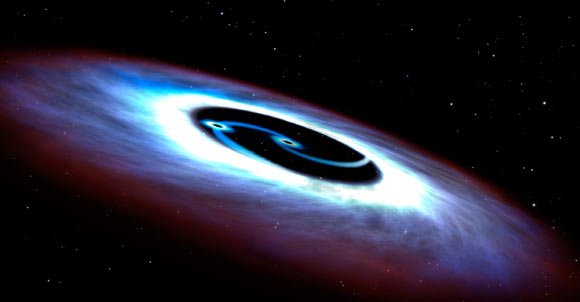 In an interesting discovery, astronomers have successfully found out the most compact double or binary supermassive black hole present in the galaxy which is situated about 400 million light-years away from Earth.

The double supermassive black hole is situated inside the gas-enriched interacting spiral galaxy named NGC 7674 (Markarian 533) within the constellation Pegasus.
Again the two supermassive black holes are apparently separated by a distance of less than one light-year. Professor David Merritt, from Rochester Institute of Technology, informed that the dual black hole that they found out

Professor David Merritt, from Rochester Institute of Technology, informed that the dual black hole that they found out possesses the smallest separation ever detected with the help of direct imaging. Also, the combined mass of the two black holes is estimated to be roughly around 40 million times the mass of the Sun and the orbital period of the binary is close to 100,000 years. He also added that the formation of a class of smaller black holes occur when the massive stars explode as supernovae. Like that in 2015, a collision of stellar mass black holes led to the landmark discovery of gravitational waves with the help of Laser Interferometer Gravitational-wave Observatory (LIGO).

Supermassive binary results in the generation of gravitational waves had a very low frequency as compared to the characteristic frequency of stellar-mass binaries, and that’s why its signal cannot be detected by LIGO. So, to have a more sensitive detector, Professor Merritt along with his colleagues decided to use all radio telescopes present around the world and make them work together as a single large telescope so that they could achieve a resolution close to 10 million times the angular resolution of the human eye.

Professor Merritt informed that with the help of very long baseline interferometry (VLBI) techniques, they were able to detect two compact sources of radio emission at the center of the NGC 7674. These two radio sources had properties similar to that of massive black holes accreting gas thus signifying the presence of two massive black holes. The NGC is believed to be emitting radio waves in a louder manner. Hence this indicates the presence of a compact Z-shaped binary supermassive black hole in a far away galaxy. The research paper was published in the journal Nature Astronomy.