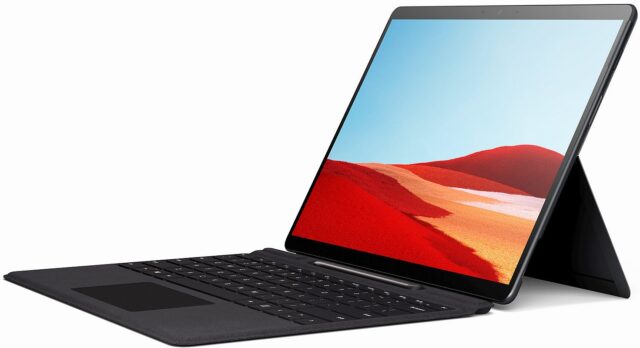 That has much to do with the way it has been designed in the first place, it being built around an ARM based mobile processor for better battery performance. Specifically, the Surface Pro X has a custom SQ1 ARM based mobile chip at its core built in collaboration with Qualcomm. Similarly, the Surface Pro X also features an SQ1 Adreno 685 GPU that too has been custom built for the device.

According to Microsoft, the inclusion of the new Qualcomm chips has led to the Surface Pro X achieve a thin and light form factor, it being just 7.3 mm in width while weighing in at 744 grams. Another advantage of the ARM based chip is the battery efficiency it provides for, it being capable of lasting 13 hours on a single charge.

The Surface Pro X also supports fast charging, it being capable of acquiring 80 percent charge in just an hour. Another huge positive with the device is its built-in LTE connectivity thanks to the Snapdragon X24 LTE Modem that it comes integrated with.

Among the other specifications of the Surface Pro X include its 2880×1920 pixel 13-inch PixelSense display having a 3:2 aspect ratio. It features an 8 GB of RAM along with 128 GB of SSD storage. The device also offers twin USB Type-C ports along with the Surface Connector charging port.

Microsoft is claiming the new Surface Pro 7 to be 2.3 times faster than its predecessor, thanks to the fitment of the new 10th gen quad core Intel i3, i5 and i7 processors. Memory and storage options range from 4 GB and 128 GB respectively to 16 GB RAM and 256 GB of storage in the top model.

The smaller 13.5-inch model is powered by the new 10th Generation Intel Core Processor while the 15-inch variant is powered by a custom AMD chip. The laptop also boasts of all-day battery life with the ability to acquire 80 percent charge in an hour. There is a larger trackpad as well along with USB-C and USB-A ports. There is a dual far-field Studio Mics as well for better Microsoft Teams support and dictation in Office.

The Surface devices will be available across all Microsoft authorised retail outlets as well as via Reliance Digital, Vijay Sales, Amazon India and Flipkart.