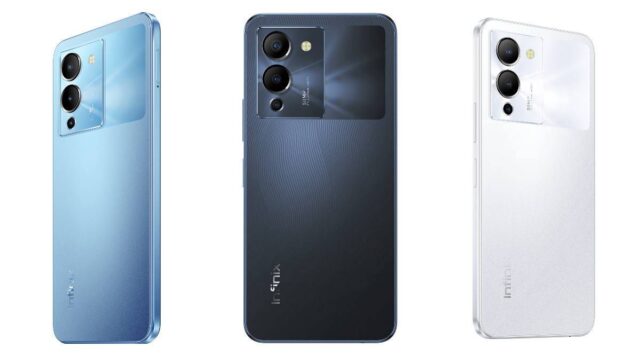 The Infinix Note 12 comes with a 6.7-inch FHD+ AMOLED display having 1000 nits of peak brightness and a 180Hz touch sampling rate. At its core the phone packs in a MediaTek Helio G88 chipset that is coupled to either 4 GB or 6 GB of memory. Native storage though is a standard 128 GB on both models.

The phone features a triple camera system at the rear which comprises of a 50 MP primary camera along with a 2 MP depth sensor and another camera of which the company is yet to reveal the details. The front gets a 16 MP shooter for selfies and video calls.

Power comes from a 5000 mAh battery with 33W fast charging. The phone runs XOS 10.6 based on Android 11. For security, there is the side mounted fingerprint sensor.

The Infinix Note 12 Turbo shares a lot of similarities with the Note 12. For instance, there is the same 6.7-inch FHD+ AMOLED display that offers 100 nits of brightness and a 180Hz touch sampling rate. The camera setup is similar too, which includes a 50 MP primary sensor and a 2 MP secondary sensor along with another sensor of which we know nothing at the moment. A 16 MP front shooter allows for selfie shots and video calls.

However, there is a change of heart for the Note 12 Turbo as it is the MediaTek Helio G96 4G chipset that powers the phone. Plus, there is also 8 GB of memory available as well though storage remains the same at 128 GB. The phone runs Android 12 right out of the box.

Otherwise, the rest of the features are largely the same. That includes a 5000 mAh battery backed by 33W fast charging support along with a side-mounted fingerprint sensor for user authentication.