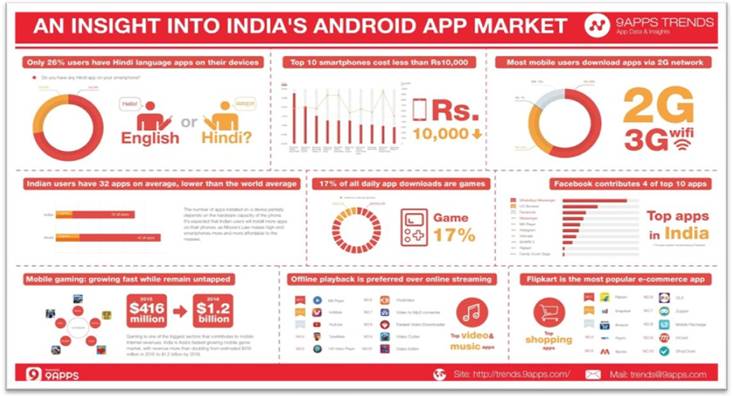 According to latest data released by IAMAI, India is the 2nd most popular country in the world when it comes to mobile Internet. Moreover, there are nearly 300 million mobile Internet users as of December 2015, and the figure is expected to double by the end of 2016. The report released by Alibaba’s 9Apps, the app industry in India has ample room for expansion because an average user in India installs no more than 32 apps.

The study indicates that majority of Indians deal with less than 32 apps on their smartphones, which is less compared to those who install apps in developed nations. The report further predicts a massive increase in the usage of mobile apps due to the emergence of a broad range of utility and e-governance apps. For example, you can now shop for your grocery, hire a cab using your mobile or buying clothes online.

With more merchants following the mobile route to tap the vast user base of mobile users, there will be a sharp increase in the usage of the apps. While more than 9 billion users downloaded apps in 2015, nearly 51 percent of users fall in the age group between 18 to 24 with senior citizens accounting for a mere 0.6 percent.

Nearly 70 percent of the total mobile population reside in top 5 metro cities with Delhi leading the race. Moreover, 74 percent of users downloaded the apps in English due to limited availability of apps in regional languages. As far as smartphone brands are concerned, Samsung tops the list with 44 percent market share followed by Micromax. The rest of the mobile brands has not crossed 5 percent with unknown brands occupying 16 percent.

On the other hand, nearly 47 percent of users still has Android v4.4 Android Lollipop running while Marshmallow stands at the third place with a market share of 12 percent. While the majority of users continue downloading apps on 2G network, the preference for offline playback than online streaming gains more attention among India users.

While WhatsApp, Facebook, Instagram and UC Browser were among the top apps of 2015, Flipkart, Snapdeal, Amazon, and Paytm, continued to be the most popular e-commerce apps among mobile users. Moreover, 17 percent of the apps downloaded daily continued to be games with car racing and action games were seen gaining popularity among youngsters.

India is one of Asia’s fastest growing mobile gaming markets with revenues expected to cross 1 billion by the end of 2018. After dissecting the data from the report, we can infer that mobile devices play a pivotal role in our daily life and will have a profound effect on the way we live, work, play and socialize.