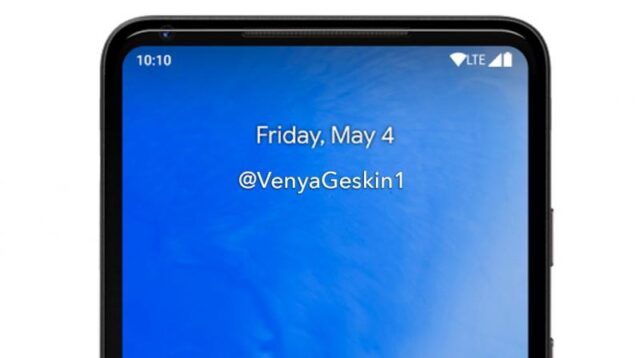 The first two generations of Google’s Pixel phones are great devices. Some might even say they’re the best Android devices out there for their practical approach and seamless software experience. Though, honestly, there were both bland looking from the front thanks to excessive bezels on the sides. All in all, they needed a bit of refinement in the design department as they weren’t as good-looking as the Galaxy S9 or the iPhone X. However, that could all change with the upcoming Pixel 3 smartphone. As alleged leaked illustrations in Android P developer preview show a handset with zero-bezels and a notchless display.

Bezel-free phones have become increasingly popular since the past two years and Google did try to reduce bezels with the Pixel 2 XL, but overall it felt that the device needed a minor overhaul. Even the display notch, first introduced with the iPhone X has become a widely adopted trend these days, though isn’t very popular with users. Manufacturers are still trying hard to create an edge to edge screen while reducing the notch to its smallest size.

The Vivo Apex has grabbed a lot of attention thanks to its bezel-free, notchless design and the commercial version of the handset is expected to launch in the market very soon. Even the upcoming Lenovo Z5 flagship will have a near-perfect bezel-free design.

Hence, there’s a possibility that Google might join hands with manufacturers like Vivo or Lenovo for this year’s Pixel model to overhaul the handset’s design aesthetics. Google’s history with its approach to smartphone design has been subjected to criticism.

The first-gen Pixel had a disappointingly bland design. It had some nice touches and had its design fundamentals in place, but it was far from what you’d call a good-looking smartphone. However, the alleged leaked render of the Pixel 3 suggests Google might significantly upgrade this year’s Pixel design and give us a sharper-looking handset.

Readers, however, are advised to take this information with a pinch of salt as nothing is officially confirmed at the time writing.