If you have missed the experience of watching the Total Solar Eclipse that occurred recently then, do not worry. Because, you will get another great chance of viewing yet another superb cosmic phenomenon, in which the Sun packs a great show in its store for the Wednesday night. A blast of solar particles has given rise to a geomagnetic storm which can be viewed from Earth’s surface from Wednesday night to Thursday morning. And this unique scene consisting ghostly, colourful lights can be viewed clearly in some parts of the United States.

In a report, The TeCake mentioned that the National Oceanic and Atmospheric Administration, or NOAA, has released a ‘strong’ advisory for the solar storm, though it’s not expected to have any impact on the electrical grid. Instead, it could become a spectacular aurora across the parts of the United States.

NOAA map indicates that those people who are to the north of the Yellow lines have a great chance of viewing the aurora of colourful lights. Based on the recent reports, it is expected that the aurora can be watched in parts of states of Washington and Wyoming and also in New York and Maine which includes cities such as Seattle, Chicago, Minneapolis, and Buffalo. The actual visibility depends, upon many factors. Cloud cover can dampen the profile of the colourful lights and also full moon’s bright light can faint the storm’s visual effect. 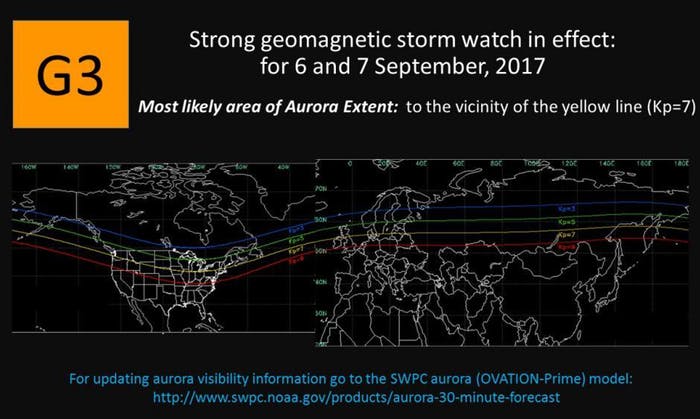 If you want to know more about the solar storm then keep a track on NOAA’s forecast which gets updated every 30 minutes. Their real time forecasts can actually help you in getting a perfect view of the aurora. Aurora’s are formed due to the coronal mass ejection where the sun emits a cloud of plasma at a lightning speed of hundreds or thousands of km/s. The latest solar storm is a result of this type of coronal mass ejection that took place on September 4.

Although the storm will not have any direct effect on the health of humans thanks to the electromagnetic field of Earth, these geomagnetic storms can sometimes trigger and affect the satellites and power grids. Robert Rutledge of the U.S. Space Weather Prediction Center in Boulder, Colorado said to Bloomberg that there no such chance of any issues regarding failure of power grids or satellites and called the storm a “run-of-the-mill-storm”