Apple is allegedly working on a new Keyboard with e-ink display keys. As the first step to implementing this new functionality, the company is planning to acquire an Australian start-up Sonder.

According to reports, the startup company specialises in the creation of keyboards with individual e-ink displays on each key. Moreover, the reported acquisition move is part of the Cupertino-based tech giant’s plan to refresh its Magic Keyboard in 2018 with a smart keyboard module.

If the rumour turns out to be true, then you can expect colour e-ink keys in gadgets released in 2017. This will enable programs to quickly swap characters for shortcuts or change to a different language.

The test prototypes displayed by Foxconn felt as natural to type on as a regular keyboard. The e-ink keyboard makes use of magnets and a mechanical structure. This is a replacement to the butterfly keys, which Apple has invented to make the MacBook keyboard thinner than ever.

In the meantime, Apple’s keyboard for the upcoming MacBook Pro with an OLED touchpad was on display at a demo hosted by the manufacturing partner Foxconn. This was reported by a Reddit user who works at Tsinghua University. The arrival of the new MacBook Pro keyboard has been rumoured for several months. 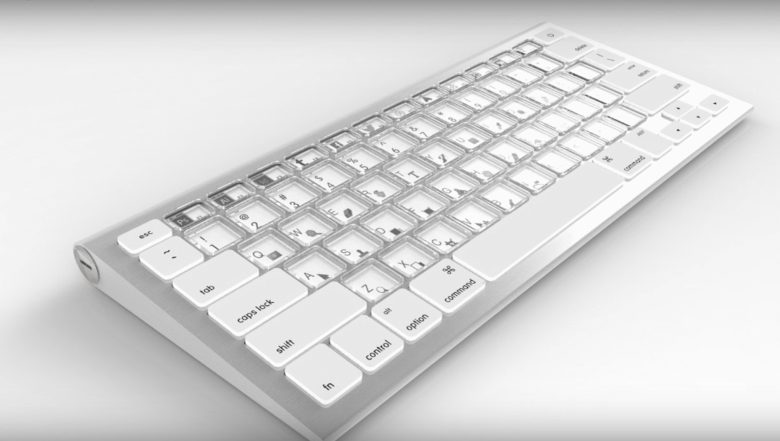 According to sources close to Apple, Foxconn reportedly permitted attendees at the closed event to test drive an early prototype of the upcoming Magic Keyboard. It will make dynamic keyboards the new standard for computers. This is similar to the iPhone made virtual keyboards the standard for mobile phones.

Most probably, the OLED touchpad will replace the function keys at the top of the keyboard. However, the Reddit user, who declined to reveal his identity, said that the Apple is working on a keyboard which will look impressive.

No confirmation that new e-ink keyboard is legitimate

Even though the leakers association with Tsinghua University has been confirmed by Reddit, we don’t have any confirmation as to whether the displayed keyboard is legitimate. Since Apple could ditch the project at any time, you should accept these rumours only with a pinch of salt.

The demo keyboard units are available in both Jet black and silver colour variants. The main feature of the prototype unit is the addition of a timing controller, which looks similar to that of the new 4K iMacs.

It also enables the keys to update super-fast like a normal display. There is also a possibility for the Apple to release an SDK to enable third-party apps to leverage the possibilities of the new e-ink keys.