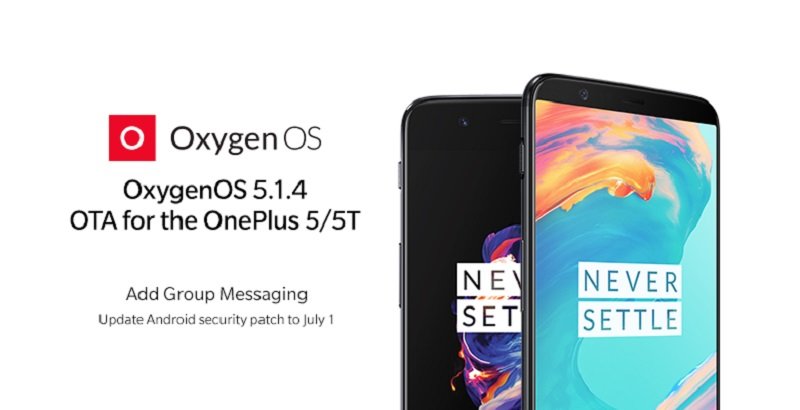 OnePlus has started rolling out the latest OxygenOS 5.1.4 for the OnePlus 5 and OnePlus 5T. The update brings several new features and fixes, along with the latest July security patch.

OxygenOS 5.1.4 for the OnePlus 5 and OnePlus 5T addresses several bugs in the Gallery App. Besides, it also brings improvements to the overall camera performance of these devices. Talking about features, the update arrives with the group messaging feature, as well as a new sleep standby mode for better battery management. Finally, the latest update also bumps Android security patch from May to July. Below is the complete changelog of the new update:

The full update weighs a whopping 1.6GB. Though as is usually the case with OTA updates, the OxygenOS 5.1.4 will be rolled out in phases. A small percentage of users will shortly get the update, while a broader rollout is expected to begin in the next few days. Users can also manually check for the update by heading over to Settings> System Updates.

In other related news, a concept video of the upcoming OnePlus 6T is doing rounds n the web, suggesting the device could get Vivo-Nex like pop-up camera, though only for selfies. The render also highlights the absence of the notch within the display as it appears to have a full screen display with no bezels at all.