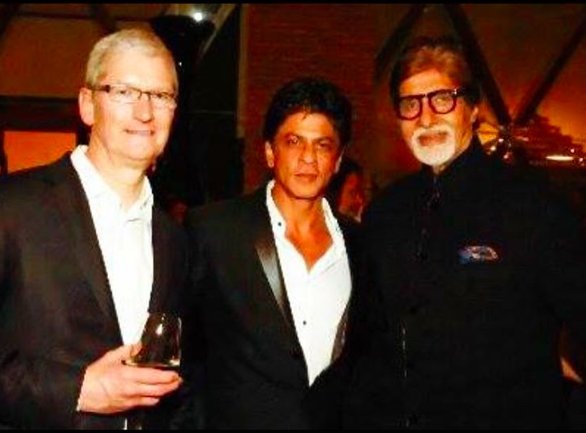 Tim Cook’s recent visit to India had a few underlying business intentions, after posting a decline in sales for the first time. The market in China seems to have started freezing out the iPhone, and a week-long trip to Asia was perhaps not just an attempt at figuring out what’s wrong but also to get a plan in motion for what’s to come.

One event that could not have missed the eyes of the media was the dinner party at Mannat (SRK’s residence). Several celebrities attended the party, but the rumor mills have it that the event wasn’t all in a cultural welcoming. Admittedly by Tim Cook, the company is rethinking India from a strategic point of view.

According to our sources close to the matter, Apple is planning to appoint Shahrukh Khan as their Brand Ambassador in India, and the public announcement will be made at the time of the launch of next-generation iPhones in India later this year.

King Khan is known to have a good business sense and he sure has a pleasing image, and Apple may be looking to exploit that. Apple may well be thinking about collaborating with Red Chillies Entertainment and other Bollywood production houses for content collaboration for Apple Music and Apple TV. Last year, the company took help from King Khan to increase its online music sales. The company had had difficulties selling on the music store, so they made a playlist of his top songs from movies and albums. SRK also put a post for his latest song from the then-upcoming film, Dilwale.

Perhaps the company has thought that it is about time that they took the relationship further. Perhaps he could be the face of the iPhone 7 launch in India. Surely this endorsement could set the company back a little fortune, but the potential of the impact could. India is still the smartphone giant’s untapped market. The company gets 60% of its sales revenue from international markets, and China constituted a third of it. That figure has been fast going down, so the best course of action seems like investing in India, and who knows better about making an entry than ‘Baadshah’ himself.

The company had planned an itinerary before the CEO’s arrival in the country, and it was reportedly business-oriented. Cook opened up to the media saying that the high price of Apple products keeps the people from buying it, and the company is planning to make amends for that. This could be an opening for the company to join the ‘Make in India’ campaign and start producing here.

The potential consequences could be catastrophic for other players in the market. Local players like Micromax could be severely hurt, and this goes against the motives of the ‘Digital India’ campaign. Hence, there must be some middle ground for this if at all the rumors and speculations are true.