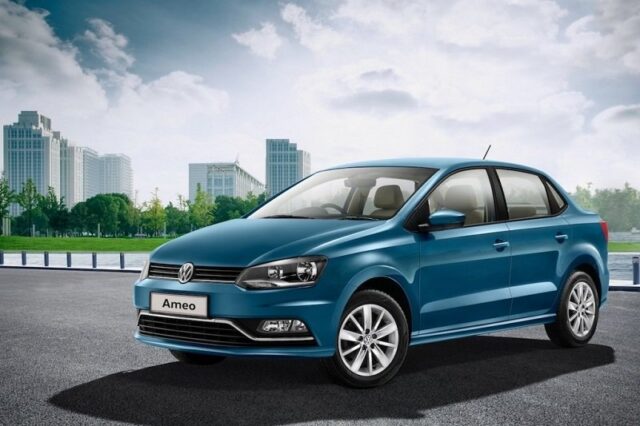 Volkswagen Ameo diesel is reportedly set for launch in India tomorrow i.e September 27. The car was earlier showcased at the 2016 Auto Expo held in New Delhi, and is based on the same platform as the Volkswagen Polo. The company hopes to improve the compact sedan’s sales during the upcoming festive season by adding a new diesel variant.

In terms of specs, the Volkswagen Ameo diesel packs a 1.5-litre, 4-cylinder diesel engine, also found on the Volkswagen Polo, Vento, and the Skoda Rapid. That said, Ameo diesel gets a larger turbocharger unit that belts a higher output of around 110bhp and 250Mn of torque. The Ameo diesel will likely be offered in both manual and a 7-speed DSG transmission.

Besides, the Ameo diesel will retain the same design aesthetics as that of its petrol counterpart. It is expected to come in three variants – Trendline, Comfortline, and Highline, and will likely get the same features found in its petrol model such as touchscreen infotainment system, automatic cruise control along with a reverse camera with parking sensors.

The Volkswagen Ameo diesel will lock horns against the likes of Maruti Suzuki Swift Dzire, Honda Amaze, Tata Bolt, Ford Figo Aspire along with the Hyundai Xcent. While the company is yet announce official pricing of the diesel model, we can expect it to be competitively priced in the range of Rs.6.9-Rs.9.5 lakh depending on the variant.

In other related news, Volkswagen is expected to give it’s Polo hatch a much-needed comprehensive update this year. The company will likely unveil the next generation Polo by the end of 2017, which will reportedly get major exterior as well as interior upgrades. For instance, it’ll have a wider wheelbase, more cabin space and, a reduced overall kerb weight. Besides, the company is reportedly working a new range of turbo-charged engine options for the upcoming Polo.

The hatch will likely get 1.5-litre engine options for both diesel and petrol variants in different states of tune. The petrol engine is said to churn out a power output of 140 and 160bhp, while the diesel engine may come in three options producing 90bhp, 110bhp and, 130bhp. The drivetrain in all variants will be mated to either a 6-speed manual or a 7-speed DSG transmission.