Panasonic India has unveiled its brand new smartphone, Eluga A2 on May 26, 2016. The phone is being priced at 9490 INR, and considering its mammoth specifications, it is undoubtedly worth the money. The company is also offering a protective screen guard worth 399 INR along with this device.

The new gadget will be available in Gold and Silver Color variants, and if it succeeds to find its feet right, then in all probabilities, it will create revolutions in the Indian mobile market.

The major highlight of this device is nothing other than its mega battery. Eluga A2 is loaded with a 4000 mAh battery, which will allow the users to explore the device for quite a long time without the fear of losing the charge.

This mid-range smartphone is powered with 3GB RAM, and it has a 1GHz quad-core SoC processor. It has a 5-inch Full HD screen with a resolution of 720×1280 pixels. Panasonic is known for its impeccable picture quality, and this time too, they are expected to maintain their standards. Check out all the features and specifications here. 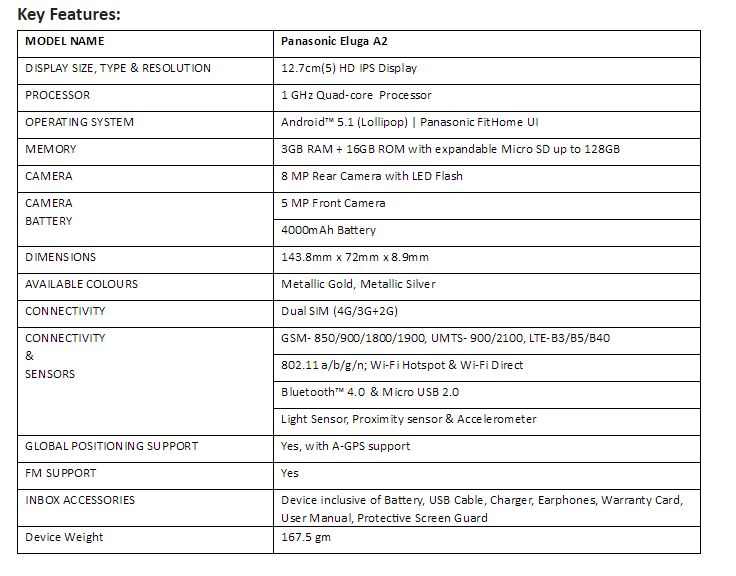 The device sports an 8MP front facing the camera with LED flash. It has a 5MP front camera which offers a decent selfie experience.

Eluga A2 has 16GB internal storage, and it is expandable up to 128 GB using an external memory storage card. The smartphone runs on Android 5.1 Lollipop.

The device offers all kinds of connectivity features which include, Bluetooth V 4.0, 4G LTE, WiFi and FM Radio.

Pankaj Rana, Mobility Business Head of Panasonic after the launch told that Eluga A2 is a specially made device for people who wish to have long operational hours with their smartphone, that too with 4G LTE connectivity.

Nitin started PC-Tablet because of his keen interest in space research, technology, and gadgets. He is an avid reader, technology enthusiast, and like to explore new places. His passion for knowledge keeps him running all the time.
Website: https://pc-tablet.com
Posts created: 3419