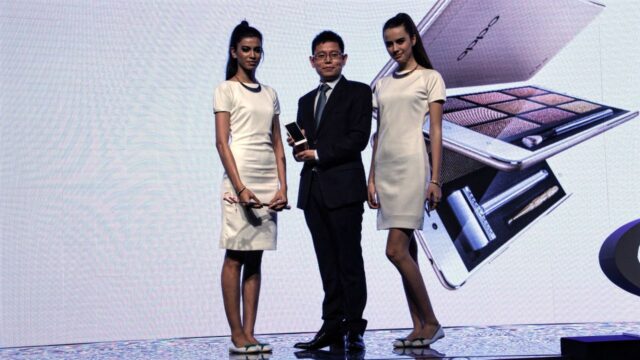 Oppo Mobiles has launced its new camera-centric smartphone, Oppo F1 in the market with a price tag of Rs. 15,990. The company also announced a high spec variant of F1 with even more sophisticated camera functions, Oppo F1 Plus, which will be avaialble in April at Rs. 26,990.

At the launch event, Oppo also revealed its plans to expand its offline sales outlets to 35,000 and 180+ official service centers across India in 2016.

Oppo F1, the first smartphone of the newly announced F series, sports an 8MP front-facing camera with f/2.0 aperture lens and a 1/4-inch sensor in addition to features such as Beautify 3.0. The camera sensor has a unique capability to shoot pictures and selfies in low-light environments.

The company also disclosed that they have infused core features on both the primary and front camera sensors which cannot be found in other smartphones.

Powered by a 2500mAh Li-Po battery, the Oppo F1 runs on Android 5.1 Lollipop on the top of ColorOS 2.1. Sporting an aluminium body, the phone has a thickness of 7.25mm and includes sensors such as proximity, ambient light, accelerometer, and digital compass.

Announcing the future roadmap, the company announces that the upcoming Oppo F1 Plus will ship with a 5.5-inch FHD display, 4GB RAM, and will be available in April at Rs. 26,990.

Additionally, Oppo has also announced a 30-day replacement and 24-month warranty policy for every Oppo product sold across India.