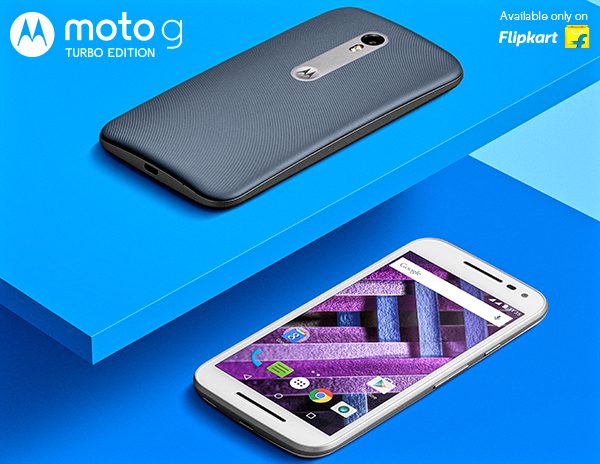 Motorola Moto G Turbo Edition has been officially launched with IP67 rated water and dust resistant. Priced at Rs. 14,499, the smartphone is now exclusively available to buy on Flipkart in two color options, Black and White.

Moto G Turbo will ship with a Snapdragon 615 processor and 2GB of RAM as opposed to 1GB RAM in the Moto G Gen 3. It also includes 16GB of internal storage capacity and can be expanded up to only 32GB via a microSD card.

The handset sports a 13MP AF primary camera with dual-LED flash and an ability to capture images with a maximum resolution of 4128 x 3096 pixels. As compared to other standard smartphones, Moto G Turbo features a 5MP secondary camera.

Moreover, the device is powered with Android Lollipop, and an update to Android Marshmallow is expected to be available soon.

According to Motorola, a 2,470 mAh Li-Ion battery provides backup for a full day. Moreover, the device will ship with fast battery charging technology and noise canceling microphone.

We would like to see IPS display for a smartphone of this price. Moreover, Moto G Turbo can be expandable only up to 32GB, which is quite disappointing.

As of the time of this writing, Flipkart is offering free Airtel double data and 100% cash back for 100 lucky customers. For instance, if you purchased the Moto G Turbo and selected as lucky then you will receive the whole amount you paid as store credit before the end of January.

You can also avail extra 10% discount if you have Axis bank debit and credit card. You can also exchange your existing smartphone for up to INR 6,000 in return for Motorola Moto G Turbo.