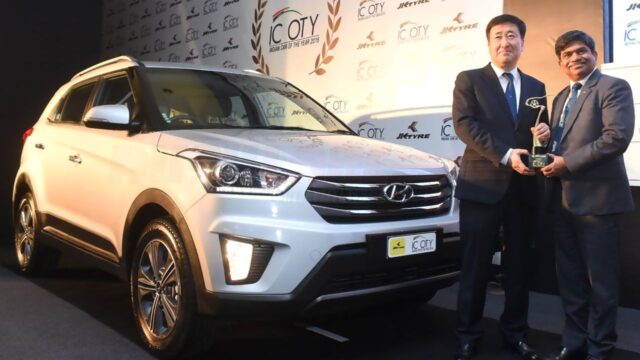 Hyundai Creta has been named as the Indian Car of The Year 2016 (ICOTY). It is the third consecutive year that Hyundai received ICOTY. Earlier the two other popular Hyundai products, Grand i10 and Hyundai Elite i20 were selected for this award in 2014 and 2015 respectively. The Hyundai Motor India Ltd. team received the award at the hands of JK Tyre & Industries Limited, Chairman and Managing Director, Dr. Raghupati Singhania, Chairman IMOTY 2016, Aspi Bhathena and Chairman ICOTY 2016, Bob Rupani.

Hyundai Creta has become extremely popular among customers within a short time and hence managed to beat the competitors in the race, Renault Kwid and Maruti Suzuki Baleno, the other two cars in the top three.

Hyundai represents innovation, modernity, and the introduction of Hyundai Creta in the compact SUV section has added a new dimension to the segment thereby expanding the scope for inclusion of more features.

Features like high quality, safety, bold design and dynamic performance make Creta, one of the most sought after cars in the compact SUV cars segment.

Make in India, Made for the World

MD & CEO, Hyundai Motors India Limited (HMIL), Y K Koo said that the prestigious automotive award received for its make in India, made for the world Hyundai Creta car is an honor for the company.

He further added that Creta is symbolic of the New Age Hyundai conception, and has successfully created new standards for the automobile industry. The third consecutive ICOTY award shows the faith and trust of the customers on Brand Hyundai.

While speaking at the juncture, Koo thanked the media, partners, clients and jurors for choosing Hyundai Creta as the Indian Car of the year making his company the most trusted and loved car manufacturer in the country.

According to him, Hyundai is contemplating coming up with overall quality products with innovation as the primary foundation.