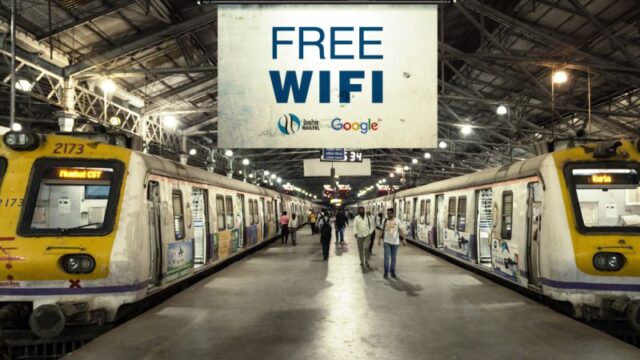 Google in collaboration with Railtel launched the first public wireless Internet service at the Mumbai Central railway station in India. The service makes use of Railwire fiber network and will be available to any user who has a working mobile connection on a smartphone. Google is planning to extend the Wi-Fi service to Bandra Terminus and Surat stations including Vadodara, Ahmedabad, Rajkot, Indore and 100 other stations across India.

Launching the Wi-Fi service, RK Bahuguna, Chairman, Railtel said that the primary focus of the company is to provide railway passengers access to high-speed Internet through our optical fiber communication network.

He further revealed that people now have the capacity to purchase affordable smartphones and hence the need for quality Internet network is the need of the hour. By establishing a partnership with Google, Railtel is hopeful of rolling out a robust and scalable service at railway stations across India shortly.

Speaking on the sidelines of the launch, Rajan Anandan of Google told presspersons that the company is delighted to launch India’s first high-speed public Wi-Fi service in partnership with Indian Railways.

The company is committed to bringing affordable Internet access to millions of people by taking into account the fact that there are around 300 million Internet users in the country.

Google will tap into the remaining one billion population and give them affordable and secure connectivity which they can use on the go. Anandan also praised the support provided by the Indian Railways for the speedy implementation of the project.

Originally announced by Prime Minister Narendra Modi during his visit to Mountain View in September 2015, Google is working to expand the Wi-Fi access facility to 100 railway stations in India by the end of 2016.

During the launch event, Google revealed that even though the project will be implemented in 100 stations initially, the service will be accessed by millions of people who pass through the various railway stations every day.