Gionee has officially announced the launch of Gionee M6 and M6 Plus with a 6020mAh battery at a launch event in China on July 26. The company revealed the launch of smartphones on its official social media accounts.

Touted as a successor to the Gionee Marathon M5 and M5 Plus, the company also released a teaser for the launch event of M6 and M6 Plus, which specifically states the battery capacity of 6020mAh. If you look at M5 and M5 Plus, they were also battery centric smartphones.

In the teaser image, you can see two smartphones sliding each other. While the top device looks like M6, the device located at the bottom is specifically M6 Plus as clearly stated on the teaser image. The bottom portion of the teaser mentions little content in the Chinese language with “5”. We infer that the devices will be launched at 5PM Chinese time. 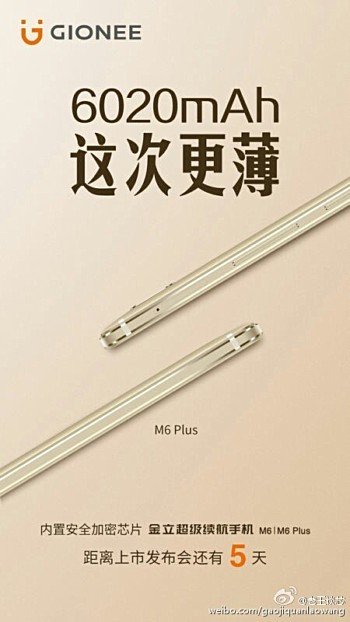 However, if you look carefully at the teaser image, the battery capacity of 6020mAh is mentioned with a smartphone marked as M6 Plus. The company hasn’t given a name for the first device on the teaser. According to sources, the Gionee M6, although will not ship with a 6020mAh battery, will offer a 5000mAh battery capacity.

Gionee M6 and M6 Plus Specs

Talking about the features, the Gionee M6 and M6 Plus is expected to feature an encrypted chip that protects the data from authorized access. This includes call records, images, videos, documents and any other data located inside the smartphone with advanced encryption technologies. Moreover, the upcoming M6 and M6 Plus will also integrate an enhanced security protection when compared to the previous counterpart M5 or any other competing smartphone.

On the specifications front, the Gionee M6 will feature a 5.5-inch AMOLED FHD display, Snapdragon 652 processor, 4GB RAM, 32GB non-expandable internal storage loaded with Android 6.0 Marshmallow. While the rear camera will be equipped with a 13MP sensor, the front-facing snapper will offer an 8MP sensor.

It is confirmed that Gionee will launch two variants of smartphone – M6 and M6 Plus. We don’t have any information about the specifications of M6 Plus but we expect it to feature a 6-inch FHD display with 6GB RAM.