The mobile market has been a haven for gaming. From classic-style JRPGs from Kemco, to Square-Enix re-releasing a slew of legendary games – there’s no shortage of content. RPG, racing, and shooting fans have been well-served for quite some time, but beat-em-up fans have had very few original games to enjoy. Sure, games like Big Action Mega Fight and Kung Fury have tried to evoke icons of the genre, but they’ve fallen a bit short. TrainCrasher is one of the few mobile brawlers that builds a strong enough foundation to deliver a console-quality game.

TrainCrasher blends brawling with an anime-inspired art style and some light RPG mechanics too. You pick one of four characters and embark on a journey to clear a gigantic train full of enemies. Each character has their own pros and cons to them – one is better for close-range fisticuffs, while others might be faster and more agile. Their blows do less damage, but you can speed around the play area more and evade more attacks. Longer-range fighters may use projectile attacks, but they’ll be less powerful. You’ll be safer in theory though, and can swap out with your partner if you want to try out a different character. 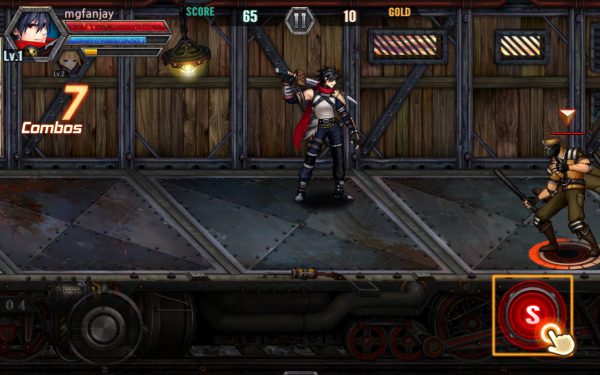 The swapping mechanic is one of the game’s more unique elements. After filling up a gauge at the top-left of the screen, you will be able hit a new button – the chain button. This doesn’t just enable a big tag team attack (which is perfect for boss battles) – but switches you over to your partner. You’ll pick a partner from a fellow player’s profile and they will provide you with an assist specific to that character.

If you have a power-heavy bruiser and want to counter-balance it with a defense-heavy speedster, you can take a look at the pre-level screen and check the items. You’ll see which characters are available, their stats, and strengths. Based on that info, you can pick your ally and start playing. This allows you to level up your existing profile’s character while also dabbling in the other characters and you can figure out which ones you would prefer to chain with for certain levels.

The basic game is a left-to-right beat-em-up where you go through a stage, defeat a series of enemies and then battle a boss. Each sub-level has a boss and those sub-levels can be beaten in a few minutes. All told, a playthrough of a single full stage will take you around an hour. If you want to mix things up a bit, the TrainCrasher does give you that option with a few other game modes. They all have the same core gameplay, but mix it up enough to make it feel fresh.

The arena mode allows for one on one combat – or if you want a real challenge, you can go in against a pair of enemies. Another mode pits you against regular enemies, but does so with a plethora of barrels around you. Careful aiming is required to nail the exploding barrels in such a way that they hit your enemies, but not you while also allowing you to hit green barrels for cash. Another mode is an auto-scroller that blends the core game with an endless runner where your goal isn’t so much to win, but just make it as far as possible.

The RPG mechanics blend into things fairly seamlessly, and make you wonder why more beat-em-ups haven’t used a leveling up system. In doing so here, you gain access to a more powerful character as well as better weapons. You can also craft new weapons, and build your character up to the point where you feel like you can tackle any obstacle – whether it’s a swarm of enemies or a gigantic mechanical boss.

No matter what mode you play, the developers have ensured that the game is easy to control. The virtual joystick on the bottom-left of the screen works very well and is one of most responsive in mobile gaming. It’s very versatile as well and you can have it move with your thumb in real-time. The buttons are in a side-by-side NES style. A attacks and when combined with a light stick press towards a foe, enables you to grapple and then throw enemies around. S is your special, while a large Chain button shows up in the middle of the controller section to allow you to tag out to your ally. The controls are simple, but the gameplay doesn’t suffer for it. You can still attack and toss enemies, or even attack them on the ground.

Visually, TrainCrasher looks fantastic. While screenshots do justice to the detailed artwork for both the characters and environments, they don’t show off how impressive the animation can be. Ron’s scarf, much like Strider Hiryu’s, flows freely. When combined with his swordplay, it’s easy to just want to play this as a blend of Strider and a beat-em-up. Those who grew up with brutes like Haggar and Max from Final Fight and Streets of Rage 2, respectively, will love Zett. Each character has their own animation style – with Zett’s being slower and Ron’s being snappier, and it allows the characters to stand out more.

All is not perfect with TrainCrasher though. Its soundtrack is fairly repetitive, and its rock music doesn’t hold a candle to either the memorable music in Final Fight or the all-time classic songs in the Streets of Rage games.The sound effects are solid, and result in realistic-sounding gunfire, punches, and sword-slashes depending on which character you use.

If you grew up  loving beat-em-ups and want a top-notch one on a mobile device, give TrainCrasher a shot. It plays like a dream, looks great, and is the finest mobile brawler to date. It’s a must-play and won’t cost you a penny, as it’s free to play on both iOS and Android devices.