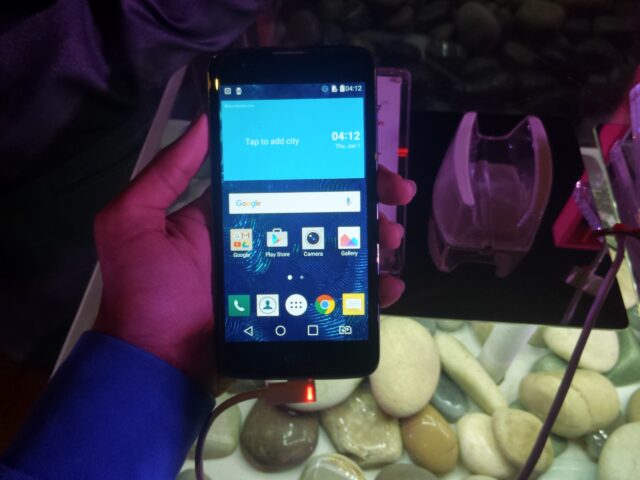 We’ve gone through all the details available and here’s what we think about the LG K7:

Considering it is an entry-level phone, the LG K7 as suspected houses a plastic body. The phone has a glossy finish with textures of waves running all across the back. You’ll find the volume and power buttons located at the back of the phone. All-in-all there isn’t an exceptional detail about the K7.

The new LG K7 employs an FWVGA screen that resorts to a resolution of 854 x 480, at 196 pixels per inch. With a lot of entry level phones available with LCD screens, the LG K7 falls short of making a bright first appearance. A close look at the screen and you’ll notice a heightened composition of yellow hues. Considering the aesthetics, the curved display does lend a smart appeal across the 5-inch screen.

The LG K7 uses a quad-core Snapdragon 210 chipset that clocks at a speed of 1.1GHz and is powered by a 1.5GB RAM. The phone houses 8GB of internal storage which can be expanded up to 32GB externally and comes equipped with support for LTE, Wi-Fi, Bluetooth, GPS and NFC, which makes it a functional choice.

One thing that is a particular boon is the device’s 2,125mAh, considering that it uses a low-powered CPU kit, the device should be able to give you a long usage cycle. The K7 runs on Android’s older operating version, the Lollipop 5.1. Considering that the hardware on the phone wouldn’t be able to support Android Marshmallow 6.0, Lollipop makes a smarter choice.

For an entry-level phone, the camera on the back at 8MP and 5MP on the front are a good offering from LG. Although capable of taking decent photographs, you’ll find that higher and lower light conditions render poor pictures with noise.

With the phone being targeted at entry-level users, it makes a decent purchase for its price. Although you might find that you will not be able to run RAM intensive applications on the phone considering it is less than 2GB.