Xiaomi never sleeps. They keep on releasing new flagship smartphones. The recently launched Mi Mix is a classic example. According to reports from the rumor mills, the Xiaomi Mi 6 will be launched on Valentine’s day 2017. There is a possibility that the company will also release a Pink color variant of Mi 6 in addition to Black and White colors.

Recently, a poster, which looks extremely untrusted appeared on Weibo with a traditional Mi logo alongside 6. The image also reveals the date and time of the launch of the rumored smartphone. 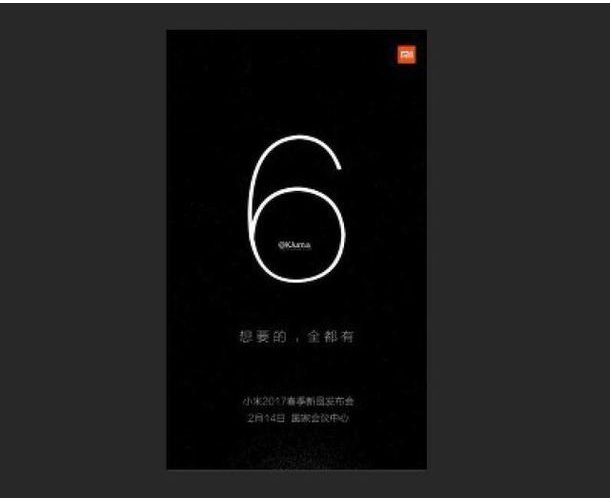 Even though there is no specific information about the release of Xiaomi Mi 6 on February 14, the rumors and subsequent clues signals the arrival of the Mi 6 on that day.

You should note that the surfaced posted could be fake since it originated from @kjuma, who is very notorious for leaking fake information. Hence, we are unable to confirm anything till there is any official information from the company.

If the reports are true, you can expect several versions of Mi 6 in 2017 such as Mi 6S, Mi 6E, and Mi 6P. Each of these handsets will feature different processors and configurations. That being said, there is no credible information about the release of Mi 6 from the company. Hence, you will have to wait till an official announcement is made from the company sources.

Mi 6 will most probably feature a 5.2-inch FHD display, Snapdragon 835 processor, up to 6GB RAM and 128GB storage. You can expect at least 21MP rear camera paired with 8MP front-facing snapper. Like all other Xiaomi handsets, you can expect 4000mAh battery. Moreover, Xiaomi will also integrate Android Nougat into the phone since the Android Marshmallow will become outdated by that time.

You should keep an eye on the social media handles of Xiaomi for updates. Alternatively, you should also keep a close watch on PC-Tablet Twitter handle and Facebook page for fresh updates.